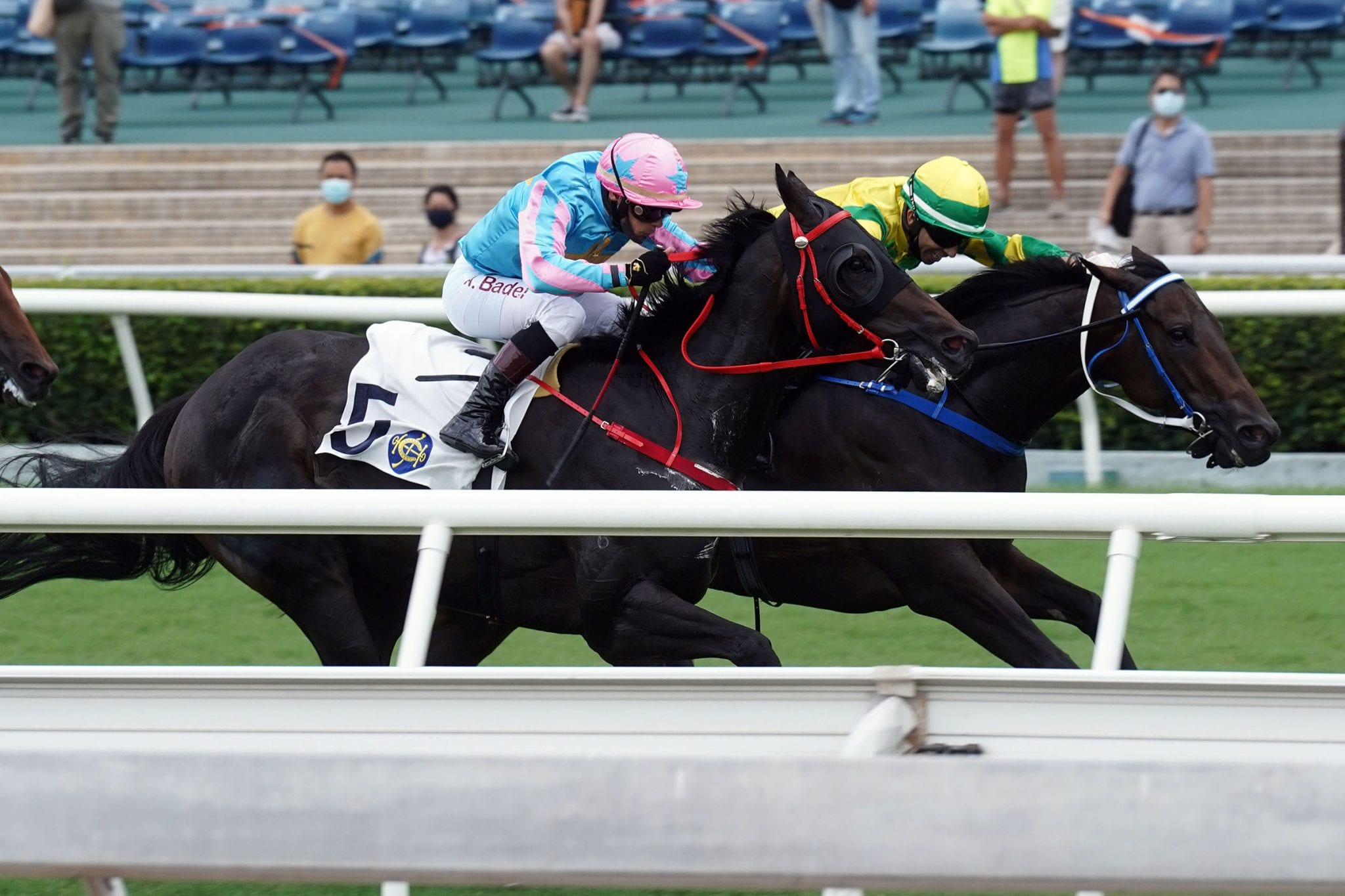 Following an arduous season which included the demanding three-race Four-Year-Old Classic Series, the pair rose to the challenge against more experienced rivals to stake their claims as Hong Kong’s ‘generation next’, fighting out one of the season’s most exciting finishes which went Sky Darci’s way by a short head.

“I thought for a short moment he (Healthy Happy) was going to come back but he kept on well, he fought very hard and he’s still a very young and progressive horse, he still has a lot to improve – I believe he’s going to be a top horse for next season,” jockey Alexis Badel said.

Aided by a handy pull in the weights last start, the youngsters this time find themselves further up the handicap as they ready for the traditional end-of-season seven furlong Group 3.

“It was a great effort from the horse, it was a tactical race because the pace wasn’t very fast, it was very gradual and he sprinted very well, the winner is a very good horse who showed a very sharp turn of foot,” Badel said.

The pair have met four times so far; Healthy Happy has one victory over his adversary in the Hong Kong Classic Cup (1800m), while Sky Darci has two, firstly in the BMW Hong Kong Derby (2000m) before last month’s Group 3 over the mile.

“In a handicap race when you carry 114 (pounds), it’s always a huge advantage and obviously then when you have a horse with a bit of quality it makes a big difference, in my mind, he is a very classy horse and he will keep improving – there’s something there,” Badel said.

Trainer Frankie Lor has been equally as happy with the Zoustar gelding, who is a three-time winner in Hong Kong with one victory earlier this term over 1400m at Sha Tin.

“He’s kept his form and he’s doing really well, at least you can see he’s kept improving, so I’m really happy and the winner who defeated him was the Derby winner,” Lor said.

“After this run he’ll be put away for next season and he’ll continue to run in Group races from now on with his rating,” Lor added.

While impressing both Badel and Lor already this term, the pair is in agreement that increased maturity could well see him regarded as a future top-liner in Hong Kong.

“He’s got great ability and he will take all of the benefits from the off season – he will come back stronger, he’s already very strong and I believe he is going to be one of the good ones for next season,” Badel said.

The 109-rater arrived in Hong Kong as a two-time winner in Australia when known as Leviathan under the care of Peter and Paul Snowden.

“He needs a smooth run and because he’s a very easy to ride you’re not afraid to position him without cover or when you step away from a bad draw.

“He can be positive and you can use his big action, so I think the key to him is a smooth run and as long as he is happy and sound he will give 100 percent,” Badel said.

Savouring Group 1 success in the Chairman’s Sprint Prize (1200m) aboard Wellington on FWD Champions Day (25 April), Badel is looking to add further big-race success to his record before the season concludes on Wednesday, July 14 at Happy Valley.

“He’s shown his form over 1400 metres in Class 2 in the past, so I think he has good early speed and also we don’t have to lead all of the time, I think it might be interesting this weekend as we come back in distance with a bit of pace in the race and then also to not hit the front too soon.

“He’s very versatile, so I must say he can do well between 1400 and 1800 metres, it shouldn’t be a problem and he’s still a young horse so we thought it was a good idea to let him enjoy a good pace over shorter,” Badel said.

On the day, Badel will also feature in the afternoon’s other Group 3 contest, the Premier Plate Handicap (1800m) aboard Fast Most Furious, while Frankie Lor saddles Reliable Team in that same nine furlong test.

“This season he has been consistent, he’s always close and he’s also easy to train but this time I think it’ll be a hard race, especially against Southern Legend,” Lor said.

The grey is a six-time winner in Hong Kong from 23 starts, including three runs ago when he made all at +4800 under Derek Leung in a strong Class 2 contest over the mile.