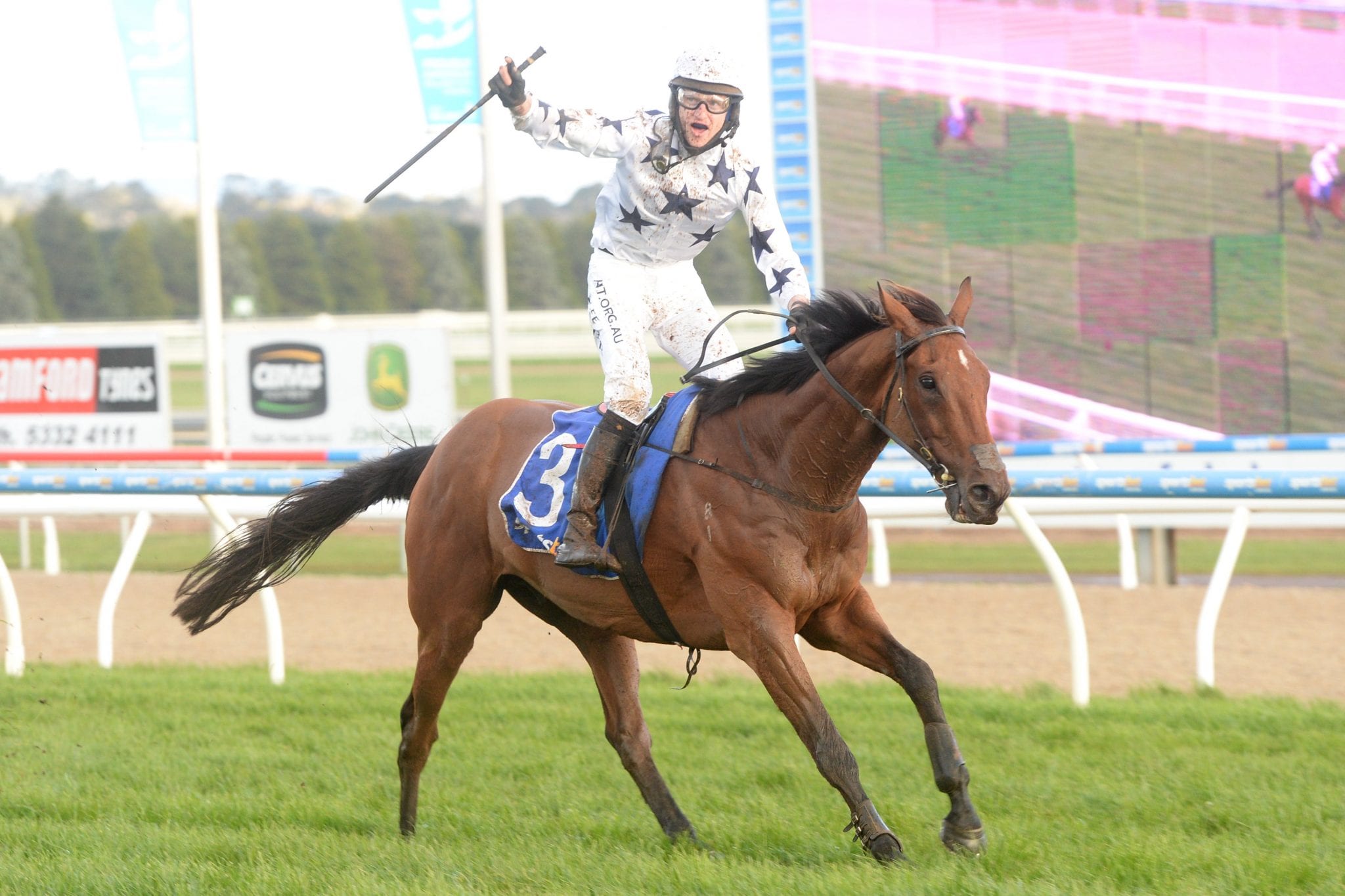 Bay Of Plenty owner John Heale couldn’t have wished for a better tribute to one of his best friends when Bee Tee Junior won the Grand National Steeplechase (4500m) at Ballarat on Sunday. The Tauranga pharmacist watched the televised coverage from his home as Bee Tee Junior made a successful steeplechase debut to become the first horse to defeat fellow former New Zealand-trained galloper, Ablaze, over fences.

He scored by nine lengths with yet another New Zealand-bred, Michelin, 15 lengths back in third placing. Amid the excitement as in-form jockey Lee Horner guided Bee Tee Junior to his decisive win, one of Heale’s first thoughts went out to the late Brendan Thomas Meo, who passed away exactly eight years ago to the month.

“I named the horse Bee Tee Junior after Brendan, as in the Bee Tee being Brendan Thomas,” Heale said. “I was one of his mates for over 50 years and we used to breed and race horses together. We bred Bee Tee Junior under our company, BM and JH Holdings Ltd. “We’re really ecstatic with the win and so is Brendan’s family. “He gave me a scare when he lifted his head at the last fence, but he got over it all right. His jumping before that was so good.”

A President of the Masterton Racing Club, Meo enjoyed many highlights as an owner and breeder with horses spread around various trainers, including the late Malcolm Smith, Murray Baker, Jeff Lynds and Alby McGregor. Heale shared in Meo’s excitement with Meo racing such top gallopers as Let’s Sgor, winner of the Group 1 New Zealand Oaks (2400m) and New Zealand Filly of the Year, in addition to multiple Group One performer Marconee and Listed New Zealand St Leger (2500m) winner Arreviderci.

“Brendan used to agist our horses on his property down in the Wairarapa, but since he passed away I’ve got rid of all my broodmares, I’ve given them away and that includes Bee Tee Junior’s dam (That’s My Char),” Heale said. The last raced foal from That’s My Char is Princess El Jay, who has gone on to win four races after originally being a stablemate for Bee Tee Junior in Shaune Ritchie’s Cambridge barn when raced by Heale.

Heale has continued to race horses (principally in syndicates) with a few trainers, including Ritchie and Mike Breslin, and is involved in the syndicate which races the Ritchie and Colm Murray-trained Bella Mente, a winner who has been a multiple stakes placegetter, including a third in last year’s Group 1 Manawatu Sires’ Produce Stakes (1400m).

Heale originally raced Bee Tee Junior from Ritchie’s stable with the Meo Family Trust and Andrew Lacy, the gelding winning eight flat races and running three times in the Group 3 New Zealand Cup (3200m) at Riccarton. Bee Tee Junior was then tried twice over hurdles, losing his rider first-up then winning well at Ellerslie last September when beating Grinner and Country Bumpkin who both performed well at Awapuni last Saturday. Grinner was runner-up in the Awapuni Hurdles (2900m) and Country Bumpkin won a maiden steeplechase by 15 and a half lengths.

Last year the idea arose to send Bee Tee Junior to Victoria. “We tried selling him, but the money didn’t come through,” Heale said. “Shaune was pushing the idea to make a deal and send him to a trainer over there and both Aaron Kuru and Shaun Phelan were sure he’d measure up.” After original negotiations with another trainer weren’t completed, a deal was struck with Pakenham trainer Rachael Cunningham and her husband, Peter, a former jumps jockey. The latter went into the partnership with Heale and Ritchie. “I haven’t met either Rachael or Peter, but every week I get information sent through on the horse,” Heale said. “It’s just a shame I can’t get over there to watch his races.”

Bee Tee Junior had four flat runs (including a second) for the Cunninghams before he switched to jumping and he hasn’t looked back. He won his Australian jumps debut over hurdles at Warrnambool last month, then was just pipped when splitting fellow New Zealanders Tallyho Twinkletoe and Gobstopper at Pakenham before going down a length to Ablaze in the Grand National Hurdle (4200m) at Sandown.

“I got the message they were going to assess how he was and would probably go for JJ Houlahan Hurdle (3200m) on Sunday. Switching him to steeples hadn’t been mentioned at that stage,” Heale said. “Then I got another message to say he had schooled well over steeples and was going for the Grand National Steeplechase on that day instead. “It was a surprise to me, but they know what they’re doing. They proved that again on Sunday. “They’ve done a great job with him and Lee Horner has ridden him so well.”

Horner was in top form on Sunday, also winning the JJ Houlahan Hurdle on Instigator after starting the day with a 19-length hurdle triumph over 4000m on former southerner Flying Agent for his partner, Ballarat trainer Amy McDonald. Also on the programme Home By Midnight, who raced in New Zealand as Five To Midnight, won for the estate of recently deceased Kevin Pratt.