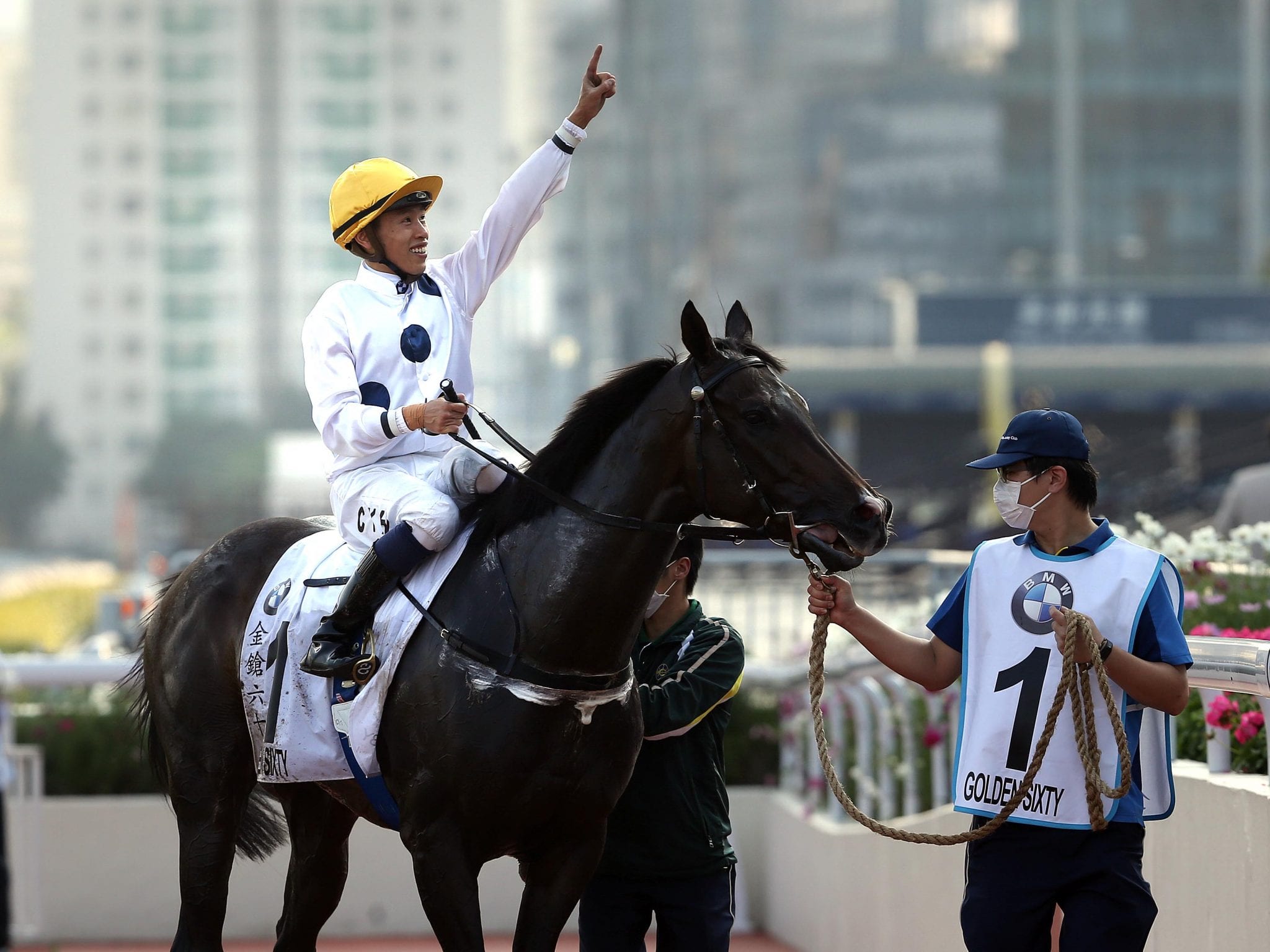 Golden Sixty returns to action at Sha Tin on Sunday (27 September) with jockey Vincent Ho buoyed by his star mount’s preparations and intent on thwarting Beauty Generation’s tilt at a fourth straight win in the Group 3 Celebration Cup Handicap (1400m).

The BMW Hong Kong Derby winner has not raced since he completed a sweep of the Four-Year-Old Classic Series when winning that prize brilliantly in March, a victory that gave him a perfect seven from seven record for the term. The Francis Lui-trained five-year-old is now aiming to initiate a changing-of-the-guard at the top of the Hong Kong pecking order as he takes on one of the city’s all-time greats, Beauty Generation, an 18-time winner with eight Group 1s and HK$104 million in the bag.

“Golden Sixty is a bit stronger both mentally and physically; mentally he’s a lot calmer this year. It’s exciting, even being back on for gallops – it’s great to be back on him,” said Ho, who became the first ‘homegrown’ rider in 25 years to win the Hong Kong Derby.

Golden Sixty heads into the weekend off the back of two dirt-track trials in which he was not asked for too much effort. The surface was rated wet slow for his second trial, prompting Ho to nurse Golden Sixty at the rear of the field.

“The track condition wasn’t as planned and we didn’t want to force it too much with him, with all the kickback, so it wasn’t as planned but we (also) gave him a grass gallop and he had a really good blow,” Ho said. “He feels great – he’s working well, and his last gallop felt good.”

Beauty Generation will carry 133lb for his first-up run, just as he did last year when he claimed the trophy for a remarkable third year in a row, while Golden Sixty, three years the champ’s junior at age five, slots in with a featherweight 115lb.

“There’s quite a big weight allowance for us but it’s his first-time racing against the big boys so it’s good to have the handicap on our side,” Ho said.

Zac Purton will again be in the plate for Beauty Generation’s step-out, the former John Moore-trained gelding’s first start under the care of two-time Hong Kong champion handler David Hayes, back this term for his second spell in the city.

“He’s had a little bit more time between runs this time than what he has previously and obviously he’s had a stable change as well. He’s got a different training regime but the horse seems to be really well,” Purton said.

The Road To Rock eight-year-old is looking to become the first horse in history to accrue 19 Hong Kong wins, the others locked on 18 are Silent Witness and Super Win.

“His trial was good and we know he goes good fresh, he’s got a good gate albeit a tricky one but we’re going there with some confidence – let’s see if he can do it four years on the bounce,” Purton said.

Beauty Generation will break from gate one, right beside Golden Sixty in gate two among the 11 runners. “He’s certainly a horse that enjoys leading, he gets into a nice rhythm when he’s in front and that’s when he’s been at his best and most effective so we’re not going to reinvent the wheel too much, I think,” Purton said.

The Caspar Fownes-trained duo of Southern Legend and Dances With Dragon will also take their places. The former narrowly edged Beauty Generation in April’s Group 1 FWD Champions Mile, while the latter returns off a near-five length demolition job in the Group 3 Premier Plate Handicap (1800m).

“He’s coming nicely into this first race of his prep,” Fownes said of Southern Legend (128lb) who will break from gate five with Blake Shinn up.

“I’m sure he will run well,” Shinn said. “He’s a horse who is always competitive and it is going to be hard at the weight scale given it’s a handicap. First-up he generally runs a good race, he has drawn a good barrier, he’ll put himself into a good position and it’s an exciting race.

“I’m delighted to be riding the horse, he’s proven as a top performer and his trial down the straight behind Beauty Generation was very good.”

Dances With Dragon (116lb) won his last start of last season under Keith Yeung, and with the the rider having scored for the stable at Happy Valley on Wednesday night, Fownes is hopeful the pair can strike a chord again.

“At 1400 metres first-up, I think he’ll run a cheeky race and it wouldn’t surprise me if he snuck in and snagged some prize money,” Fownes said.

Champion Griffin Good Luck Friend went from strength-to-strength last season with four wins from six starts and this Sunday at Sha Tin he will aim for a fourth successive win as he tackles the Class 2 Hwamei Handicap (1200m).

The Ricky Yiu-trained galloper kicked off his career as a 52-rater and shot up 33 rating points from Class 4 to Class 2. He will once again pair with three-time champion jockey Joao Moreira.

“He’s done nothing wrong, particularly in his last three starts – everything I have asked him to do at the races he has responded,” Moreira said.

The Swiss Ace gelding – drawn three for this test – did not enjoy the smoothest of passages close to the speed last time out.

“I wasn’t able to really give him a smooth run as I had horses digging on my inside forcing me to keep on going and going, that was quite testing for him. It’s now a case of whether he can match it against the good horses in Class 2,” Moreira said.

Sunday’s 10-race programme at Sha Tin kicks off at 1pm with the Class 5 Tailorbird Handicap (1000m).