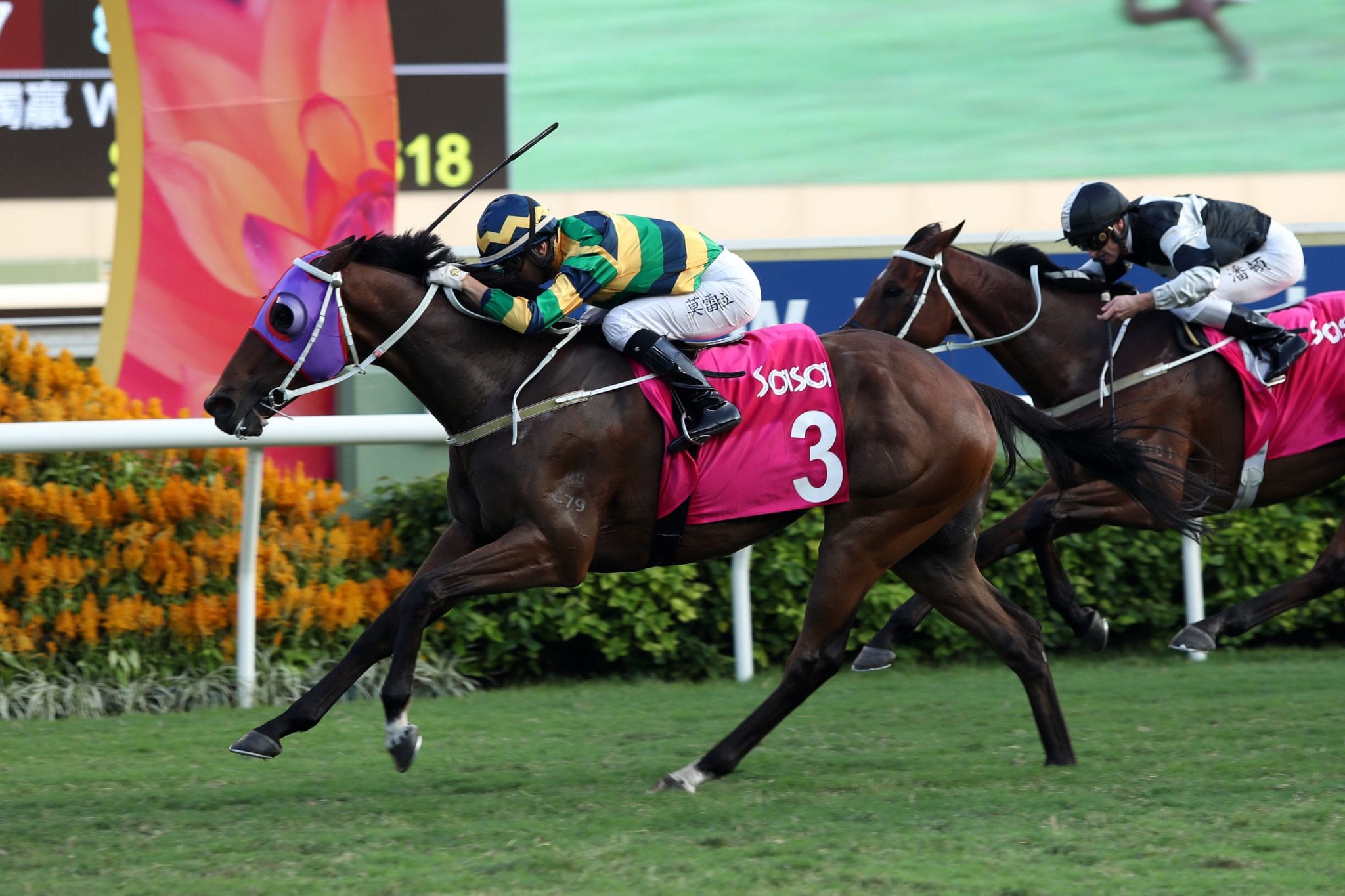 The Pierro gelding passed the post a length and a quarter ahead of stablemate and reigning Hong Kong Horse of the Year Exultant (133lb), in a swift time of 1m 45.91s, which secured the two-time champion trainer his fifth triumph in the race.

Furore’s win was his first since his heroics in the 2019 BMW Hong Kong Derby (2000m) as a four-year-old. Despite multiple placed efforts in the highest grade, the six-year-old was without a win from his following 12 runs, and this afternoon’s reward owed plenty to jockey Joao Moreira’s cool, calm and collected ride.

“I actually had in mind that we were going to be a little bit closer in the field thinking that there wasn’t much pace in the race but he didn’t jump very well so we found ourselves a little bit further back,” Moreira explained.

“Halfway through I started to not worry about that anymore though as he started to travel very comfortably, slowly coming closer into the race and I could feel from there on that he was going to be very hard to beat,” the Brazilian added.

The New Zealand-bred stepped away slowly and was trapped at the rear early on but turning for home Moreira asked his mount for an effort at the 400m mark and he responded readily.

“We know he is a good horse and it was just a matter of time until he won another feature race, he’s a nice horse and there is more to come with him,” Moreira said.

Today’s win was the rider’s 31st success this season but his first aboard Furore, at his first pairing with the Tony Cruz-trained bay. Moreira has a 10 win lead in the jockeys’ premiership.

“When he ran in the mile race (Oriental Watch Sha Tin Trophy) it was too short for him. I find he has no (early) speed and I thought Joao (Moreira) would just stay quiet because with a patient race he’s sure to come home with you and he came home pretty good – he had a light weight too,” Cruz said.

Cruz trained three straight Group 3 Sa Sa Ladies’ Purse winners from 2004 while his most recent, in 2018, came with Time Warp who was withdrawn this morning from today’s contest due to lameness in his right front leg.

“We’ll see how well he (Time Warp) can manage getting back to the races, he needs to trial at least but we’ll see what we can do,” Cruz said.

“I’m very happy with Exultant, he was carrying the top weight and 1800 metres is definitely not his trip but this is a lead-up to the Jockey Club Cup – he will be perfect by then.

“He’s an honest horse. It’s been five months off for him, I’m very happy with his condition this year – he’s a very healthy horse,” Cruz said.

Last year’s winner Southern Legend (129lb) finished in fourth and jockey Neil Callan said: “He ran an alright fourth – I’d have preferred to have something to lead me.”

Trainer Chris So said: “Everything about the horse is correct, he shows this in his training – he has ability, also he’s an ISG so it’s a good win for the Club – I was very lucky to get him.”

The Charm Spirit gelding was a HK$4 million purchase out of the 2020 July Hong Kong International Sale.

“I expected him to run well but I explained to the owner that as it was his first start against a strong field, he may need a bit more experience but luckily he performed pretty well – he showed his ability,” So said.

Authentic Champ got off the mark for trainer Jimmy Ting, scoring in the second section of the Class 4 Rose Handicap (1400m) under last season’s Tony Cruz Award recipient Vincent Ho.

Ho then took a race-to-race double as Stronger burst clear in the Class 2 Aster Handicap (1000m) for legendary jockey-turned-trainer Douglas Whyte. The ex-John Moore galloper scoring at his first start for his new handler while also securing a High Achievement Bonus of HK$1 million for his owners – as four-year-old horse with a minimum rating of 80 who gained his first win in Class 2 before reaching the age of five.

Speed Fay Fay got his nose in front for Chad Schofield and Benno Yung to capture the first section of the Class 4 Rose Handicap (1400m). The four-year-old scoring by a nose with only a length and three quarters separating the first eight runners across the line.

Karis Teetan and John Size combined with Rhapsody in the second section of the Class 4 Lily Handicap (1200m). The Hinchinbrook gelding staved off the fast-finish from race-favourite, My Sugar.

Jerry Chau secured his eighth win since the start of October with victory in the opener, the Class 3 Iris Handicap (2000m) aboard Blastoise for trainer David Ferraris.