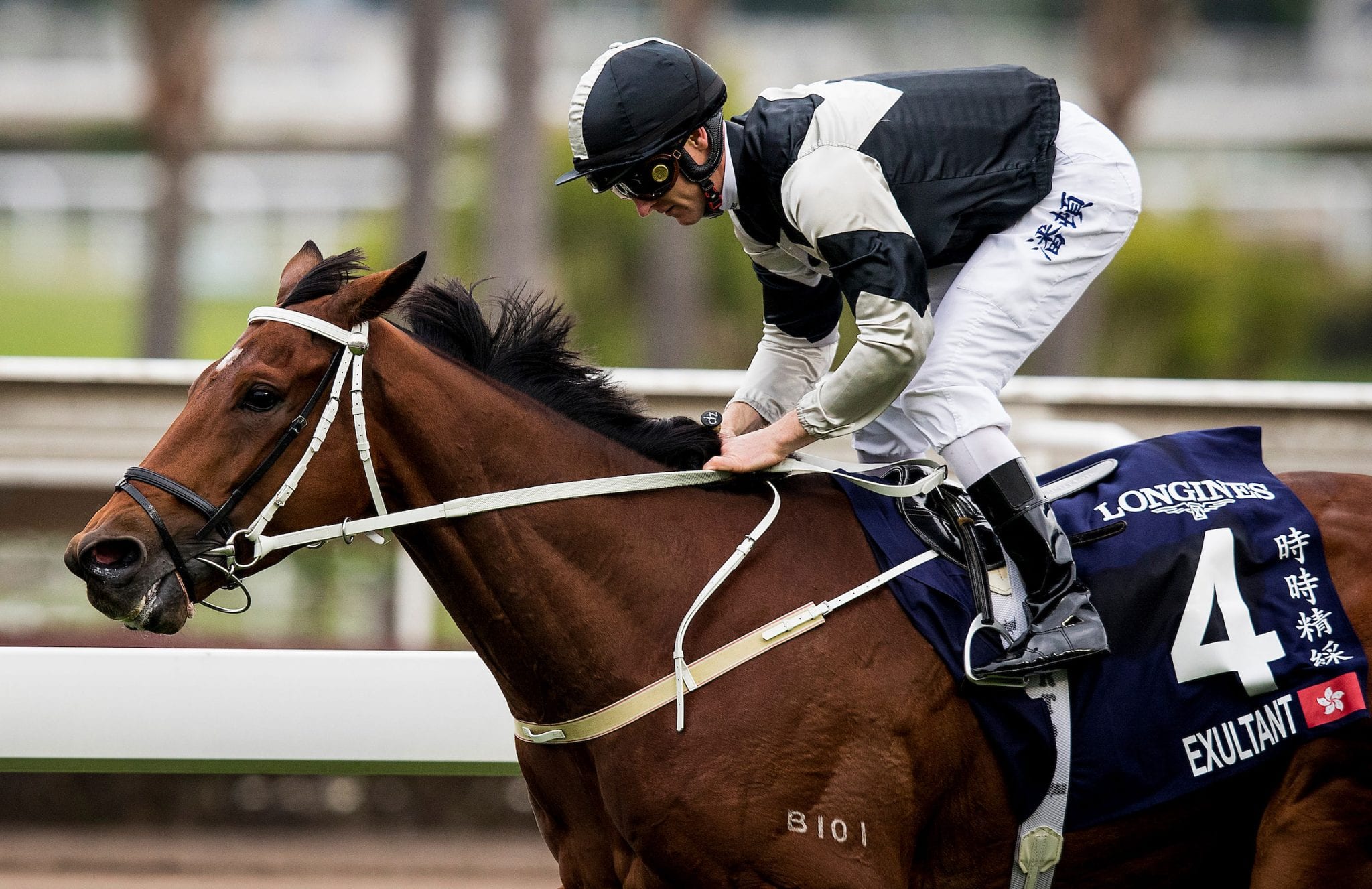 Exultant pleased connections at Sha Tin yesterday morning (Tuesday, 6 October) as he stepped up his preparations toward the Group 1 LONGINES Hong Kong Vase (2400m) and a hoped for sixth victory at the top level.

Hong Kong’s Horse of the Year went through the motions in his first barrier trial of the season in typical fashion, travelling at the tail of the 10-runner field under Zac Purton and rolling by the winning post in ninth behind Kings Shield (clocked at 1m 10.50s).

“He’s going to have another trial before he races but I thought he felt good, I just rolled him around the outside to keep him out of the dirt,” Purton said.

Trainer Tony Cruz outlined that the six-year-old’s programme is likely to include one more barrier trial before his planned return in the Group 3 Sa Sa Ladies’ Purse Handicap (1800m) on 1 November. After that, he will go on to the Group 2 Jockey Club Cup (2000m) on 22 November and the Group 1 LONGINES Hong Kong Vase on 13 December.

“He’s up to his same usual stuff, out the back, he’ll have another trial before he runs in the Sa Sa Ladies’ Purse – it’ll be the same program as last season,” Cruz said.

All three of those two-time winners travelled in from Europe and Cruz is wary of any international participants in the HK$20 million contest.

“Depends on who is coming over for the big races, the Japanese horses are always a big worry – I believe they all love this kind of track at Sha Tin,” he said.

“He’s a six-year-old now, in January he’ll be seven but I’m sure he’s still in his prime now, when he gets to seven, I reckon it’s a bit over the top for him but we hope to have a great season again. He’s fit and healthy, there have been no setbacks, which I’m very happy about.”

The six-year-old finished third behind Glory Vase in last year’s Vase before rounding out his season with two Group 1 wins in the FWD QEII Cup (2000m) and the Standard Chartered Champions & Chater Cup (2400m).

“He’s just such a warrior,” Purton said. “He keeps turning up and giving us everything he’s got so hopefully he can keep doing that, and if we can get another season out of him that’d be great but he doesn’t have to prove anything; he’s done enough, we’ll just wait and see what he does on race day and continue on his way.”

While Exultant has still got it at the top, Cruz remains cautious as to whether or not the three-time Group 1 winner Time Warp can recapture his best. His win last season in the Group 1 Citi Hong Kong Gold Cup (2000m) was his first since November 2018 when he scored in the Group 3 Sa Sa Ladies’ Purse Handicap.

“We had a few setbacks with his hind leg but he’s fine now, we gave him an MRI and nothing’s wrong with him, he’s just a bit behind time now but he could be over his prime time. If he can’t run well this season, he’ll retire, but we’ll go to the Hong Kong Cup with him,” Cruz said.