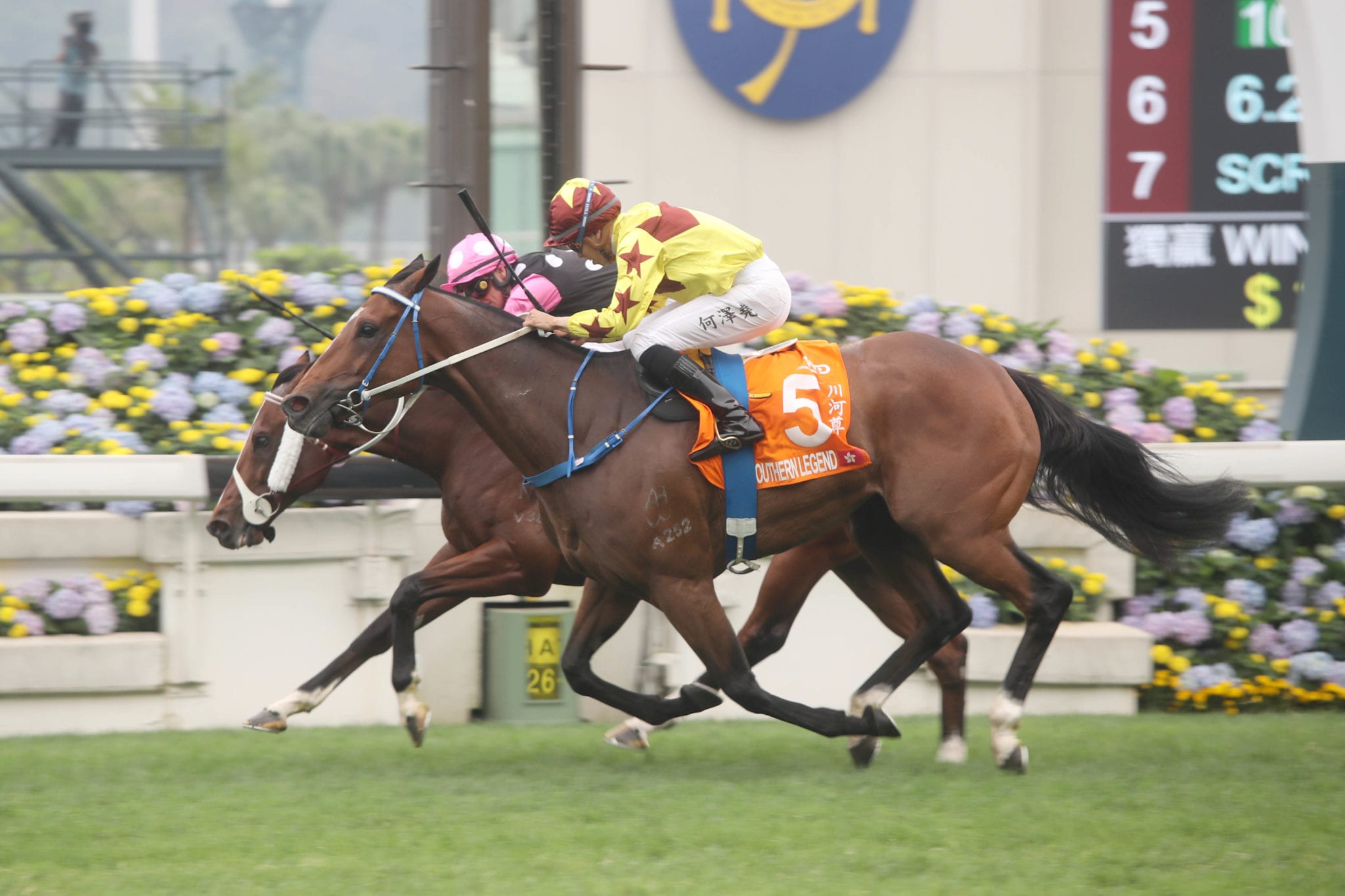 Southern Legend was supposed to be preparing for a third straight win in the Kranji Mile but Plan B worked out far better for the admirable stalwart at Sha Tin yesterday afternoon (Sunday, 26 April).

With the Singapore target off the radar due to the global pandemic, the Caspar Fownes-trained galloper instead snatched the biggest win of his career in the HK$20 million FWD Champions Mile.

And what a time it was to snare his first Group 1. In a head-bobbing victory, the seven-year-old scuppered the great Beauty Generation’s attempt to not only become the race’s only three-time winner but also the first Hong Kong-trained horse to win 19 races.

“We had the opportunity to set Southern Legend and go for the Singapore race, to try and go for three wins in a row there, but when this virus hit we had to change plans pretty quickly,” trainer Caspar Fownes said.

“He’s beaten the best on their day, there’s no doubt about that – when horses were flying, he beat Pakistan Star, Nothingilikemore and now the best horse Hong Kong’s ever seen, Beauty Generation.”

The +900 shot held off the -166.67 favourite to give jockey Vincent Ho a first win in the elite grade, his breakthrough to the top table coming off the back of his Classic Series-dominating partnership with Golden Sixty.

“This is all about Vincent, he deserves that more than anyone,” Fownes said of his former apprentice. “With hard work, if you keep plugging away, things will come your way. To get it on my horse, that’s extra special.

“He’s been a great kid and he deserves all the success he can get and I think hopefully next season, if the local trainers and all of us can get behind him, we can certainly put him up there to fight it out with Zac (Purton) and Joao (Moreira).”

Ho took the race to Purton and Beauty Generation with 300m to race as the rising star of the jockeys’ room drove his mount from off the pace to take a narrow lead over the superstar pairing; but while Beauty Generation is not the force of 12 months ago, he still has a champion’s will.

The big horse rallied; Southern Legend dug in; the old stagers flashed past the post together and the outsider had it by a short-head in a time of 1m 33.13s.

“It’s amazing,” a beaming Ho said. “There are no spectators here but it’s a Group 1! I’ve been working really hard for it and hopefully there are plenty more to come.

“The boss had prepared him for Singapore so I always felt he’d pick up really well. Last run, he ran really well, so I thought I could get close to Beauty Generation,” he continued.

“I didn’t jump that sharply, maybe because the visor was off, but I got a good spot and the pace was actually quite slow. Southern Legend had won at 1800 and he’d gone 2000 metres as well, so when they went that slowly I decided to take off at the 600 (metres) and he got a really good kick and sustained it to the end.”

Bouncing back in style

Southern Legend had performed below-par through the middle of this season, suggesting perhaps that time was catching up with him, but ran a sound race earlier this month when third to Beauty Generation in the Group 2 Chairman’s Trophy (1600m).

“It’s like anything, as horses get older you’ve got to freshen them up a little bit, get their mind back on their job,” Fownes said. “I think his last run really showed us that he was up to giving a big effort this start.”

The bay took his career record to eight wins from 31 races and improved upon his only previous Champions Mile run, when third to Beauty Generation in 2018. Fownes is looking forward to more good days with the Australian-bred.

“I haven’t told him he’s turning eight in August yet so we’ll keep that a bit of a secret!” the trainer joked. “I’ll just try to keep him happy and healthy and I always believe if horses are producing and have the ability to earn money for their owners, we keep going. When they’ve had enough, that’s when we retire them.”

Purton was disappointed with the outcome but appreciative of Beauty Generation’s brave effort.

“He ran well, he tried his hardest,” he said.

Trainer John Moore, too, was deflated at the result but proud nonetheless.

“We were gallant in defeat, look at the bobs, the bob is just against him – if he’d got the head down we’d have won. It could have gone the other way, it just wasn’t our day,” he said.

“He’s beaten the rest by two and three quarter lengths and they’ve run a pretty good time so it’s a pity he can’t go out on that but you’ve got to live with it.”

Plans have yet to be made for Beauty Generation’s future, with Moore set to retire from Hong Kong racing at the end of the season and relocate his operation to Rosehill in Sydney.

“I’d like to take him back for a mile race in Australia and then have him stay there at the Living Legends Farm. That’s what I’d like to do but what the Kwok family wants to do is what counts, I don’t know whether they’ll keep racing him or retire him.”

Purton became the first rider to win all of Hong Kong’s Group 1 races when he took the Group 1 FWD QEII Cup (2000m) on Exultant. Mr Stunning turned back the clock with a shock win for trainer Frankie Lor and jockey Karis Teetan in the Group 1 Chairman’s Sprint Prize (1200m).