Southern Legend ready to roar in the Lion Rock Trophy 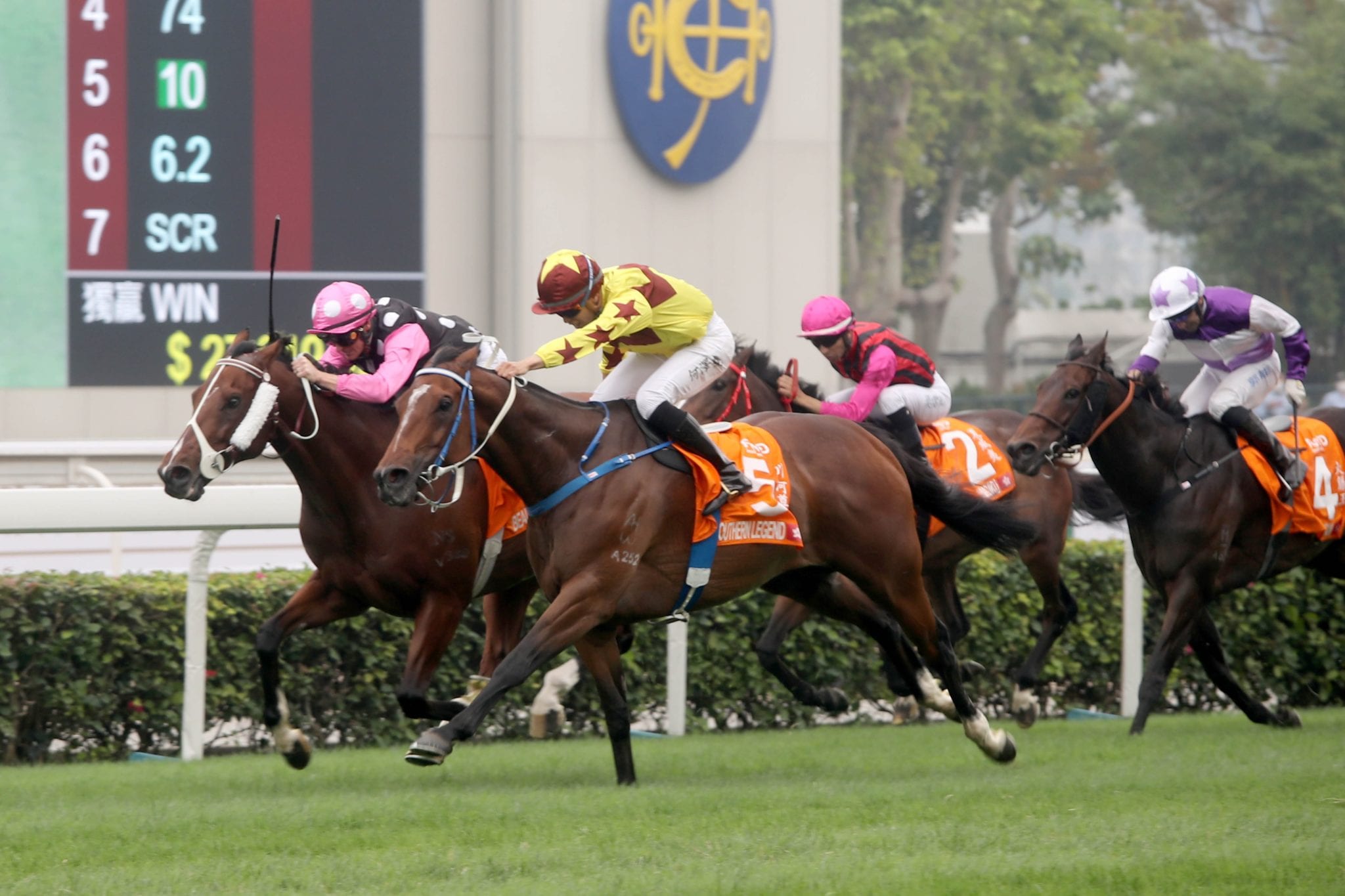 There is no Beauty Generation this time but Southern Legend will contend with a hefty 133lb on his back, as well as a concession of 20lb to more than half of his 10 opponents, some of which are aiming to prove that they too won’t be out of place in the top races next term.

“It’s always tough when you drop back into these grades with the heavy weight, giving some half-decent horses a bit of weight,” Fownes said. “But I’m sure he’ll still acquit himself very well, I’m sure he’ll be competitive and if we can win under 133lb it will be unbelievable.”

Southern Legend has been boxing around the top races for three season now and Champions Mile success was just reward for the two-time SIN Group 1 Kranji Mile winner, who will officially turn eight years old on 1 August.

“You wouldn’t know he’s getting on in years, he’s in top form,” Fownes said. “He’s been really well and we’re very happy with him.”

“His form is still there,” Ho said. “It was a really good win in the Champions Mile and he’s been well since, he’s been in really good form. It’s a handicap race this time and he’s carrying 20lb more than some of them so it won’t be easy but I hope his class will be enough to cope.

“We passed Beauty Generation by half a length and then he fought back and got really close but we were lucky that we held on.”

Beauty Generation has been Hong Kong’s standout miler in recent seasons, earning Horse of the Year and Champion Miler honours in each of the past two campaigns. With the great horse’s ability this term having dipped from spectacularly brilliant to ‘plain’ very good, those titles are up for grabs this year but Fownes is not getting too carried away by the thought that Southern Legend might nick the milers’ crown.

“Technically, he’s in with a chance,” he said. “He’d have to win this race first, I think. His last race showed his tenacity and will to win, when he fought the champ the whole way down the straight. That was a great effort.

“Let’s see what happens on the weekend and hopefully he runs well.”

Dragon up in grade

The Lion Rock Trophy will also see Fownes pitch Dances With Dragon into Hong Kong’s Group race fray for the first time. But the six-year-old is no stranger to big-race assignments, having won the Group 1 Levin Classic in New Zealand as a three-year-old.

The bay failed to win for trainer Chris So in his first Hong Kong season as he struggled to acclimatise and then bagged a couple of Class 3 wins for Peter Ho in his second campaign.

Since switching to Fownes mid-way through this season, Dances With Dragon has earned three wins at Happy Valley from four outings – climbing from a rating of 83 to 104 – and heads into the weekend on a hat-trick, with Keith Yeung booked for the first time since May 2018.

“Dances With Dragon is in there with 113lb, so it will be a test for him, to see what he’s like, and hopefully he’ll run home and show us something as well. He’s come a long way in a short period of time,” Fownes said.

“We’re looking to find out how high he can get and if he can snag one more he’ll have acquitted himself very, very well.”

Another taking aim at a first Hong Kong feature is the Douglas Whyte-trained General’s Delight, a last start winner at the distance in Class 2.

The bay raced as Millard Reaction in Australia for two wins and a second placing at Listed level and lines up for his fifth Hong Kong start rated 88, a mark that places him 17lb out of the handicap.

“He’s way out of the weights but I spoke to Douglas and they think highly of the horse,” jockey Karis Teetan said. “The race is coming at the right time, his trial was good last week, so Douglas has the horse in a good place and he wants to try him and maybe see where he stands with the horse. It’s not going to be easy but he has that low weight and the nice draw (one), so it’s a good chance to test him.

“I was happy with his trial because Dougie said to me the horse doesn’t like the dirt and doesn’t trial too well on it. But he actually trialled very well on it – he’s in good condition.”

Fast Most Furious (113lb), Preciousship (113lb), Time To Celebrate (113lb) and the talented but as yet unfulfilled – at least on Hong Kong shores – Beauty Legacy (113lb) are also set to line up.

Beauty Legacy, a Group 2 winner and Group 1-placed in Australia pre-import, has shown flashes of that ability in Hong Kong but has also thrown away his chance on occasion by failing to settle. Trainer John Size and jockey Joao Moreira are hopeful that the four-year-old, an unlucky-in-running fifth last time, is starting to understand what is required of him.

“Sometimes the speed of the race can be a bit tricky for him,” Size said, adding, “He is getting slightly better every day.”