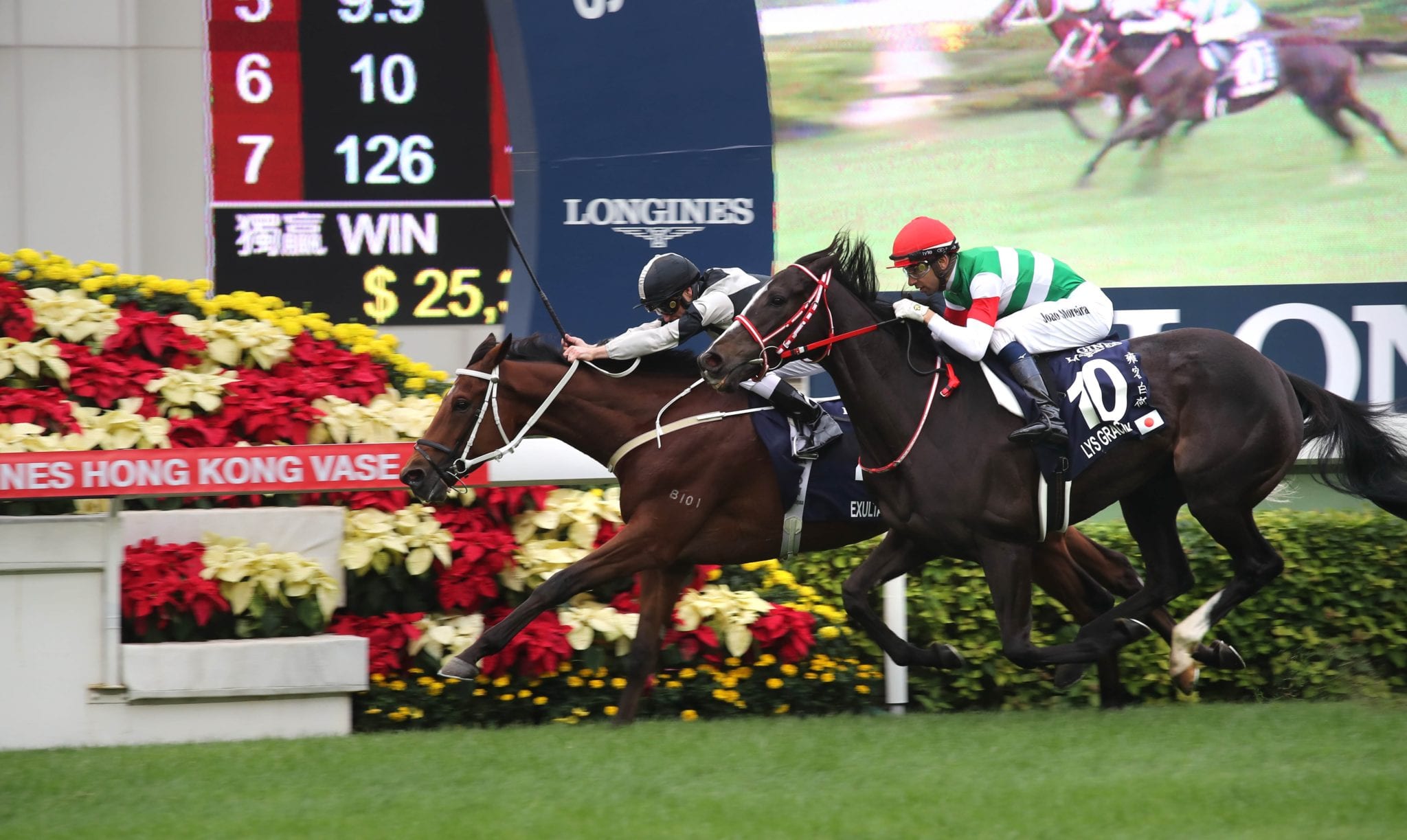 Exultant starts out towards the defence of his Group 1 LONGINES Hong Kong Vase (2400m) crown with a weighty task in the Group 3 Sa Sa Ladies’ Purse Handicap (1800m) on Sunday, 3 November.

Trainer Tony Cruz is satisfied with his champion’s preparation for his step-out run but is not expecting fireworks, with the 2400m showpiece on 8 December being the prime aim.

“The horse is in good heart and his condition is good, and while the weight is against him I believe he’s in better condition than last year,” Cruz said, adding, “but I expect him to be in top-top shape further on, in the Group 2 in a couple of weeks and then the Hong Kong Vase.”

Exultant has had two barrier trials leading into a two-race preparation for the Vase. After this weekend’s contest, the plan is for the Teofilo five-year-old to go into the Group 2 Jockey Club Cup on 17 November, a race in which last year he was a running-on second to Ladies’ Purse rival Eagle Way (124lb).

Regular pilot Zac Purton will be in the plate and, like Cruz, he is content with Exultant’s condition for his return to action. The three-time Group 1 winner closed off smartly enough by his standards in a 1200m dirt track barrier trial last week.

“I’m happy with him,” the champion jockey said. “He never trials well on the dirt, the distance is too short for him as well and he prefers the grass. I thought his attitude was good and he moves well and I’m just looking forward to getting him back to the races.

“It’s never easy when you’re carrying top-weight in these races and you’ve got some good horses down at the bottom of the weights,” he continued.

“He is first-up for the season and it is 1800 metres, so you wouldn’t expect him to be at his best, but he’s honest, he always runs well and I’m sure he’ll do that again. It’ll just come down to the circumstances of the race as to whether he’s going to have a chance or not.”

Exultant is drawn low in gate one, whereas yard mate Time Warp will have to be sharply away if he is to repeat his make-all win of 12 months ago: this time he must start from the widest berth of all, gate 11.

The 2017 Group 1 LONGINES Hong Kong Cup (2000m) winner has not won since that fine Ladies’ Purse effort and also makes his debut for the term, having led home Exultant in his most recent trial.

“Time Warp has had two trials going into this race and both were good,” Cruz said. “His trials have shown that his condition is good so I expect him to run a good race. It looks like he’s the only front-runner in the race so he’ll go out in front and do his usual. I hope he can pull it off again.”

Alexis Badel is booked to ride the chestnut. The Frenchman begins a winter contract with six rides on the 10-race card.

Lau saddled The Alfonso to finish eighth in the race three years ago but takes the view that his latest challenger has more going for him.

“They are both lovely horses but where The Alfonso was a back-marker and needed some luck in running, Sacred Capital has the tactical speed and can make his own luck with his versatility,” the trainer said.

“This horse has the speed to find a position, as we saw in the Derby, and he can also relax and take a sit off them. He also has a brilliant turn-of-foot, so he has the edge on The Alfonso in that respect.”

Sacred Capital won the Macau Derby and Macau Gold Cup in compiling a six from nine record, but was eighth of 12 at his latest start on 13 October.

“We just had no luck at all after he was a bit slow out and then we got on the back of slow horses in the run. Then when we looked like getting clear running in the straight we got severely checked so I’m just forgetting that run,” Lau said of that defeat.

Regular partner Peter Ho will take the reins on Sunday, the gelding having pleased Lau in his work at Sha Tin this week. The five-year-old had a turf gallop on Thursday morning, followed by paddock schooling.

“He is currently in good form and I am pleased with his work. He has settled well since arriving in Hong Kong and (on Thursday) we just let him learn more about the Sha Tin environment.

“I couldn’t be happier with him: he has done really well since his last run. It’s a huge step up for the horse – I realize that, with the trip over and the competition. And we are meeting Hong Kong’s best horses. But I feel he’s earned a shot at a race like this and if you don’t try you will never know.”

Sunday’s card also features some exciting debutants with big-race aspirations down the line.