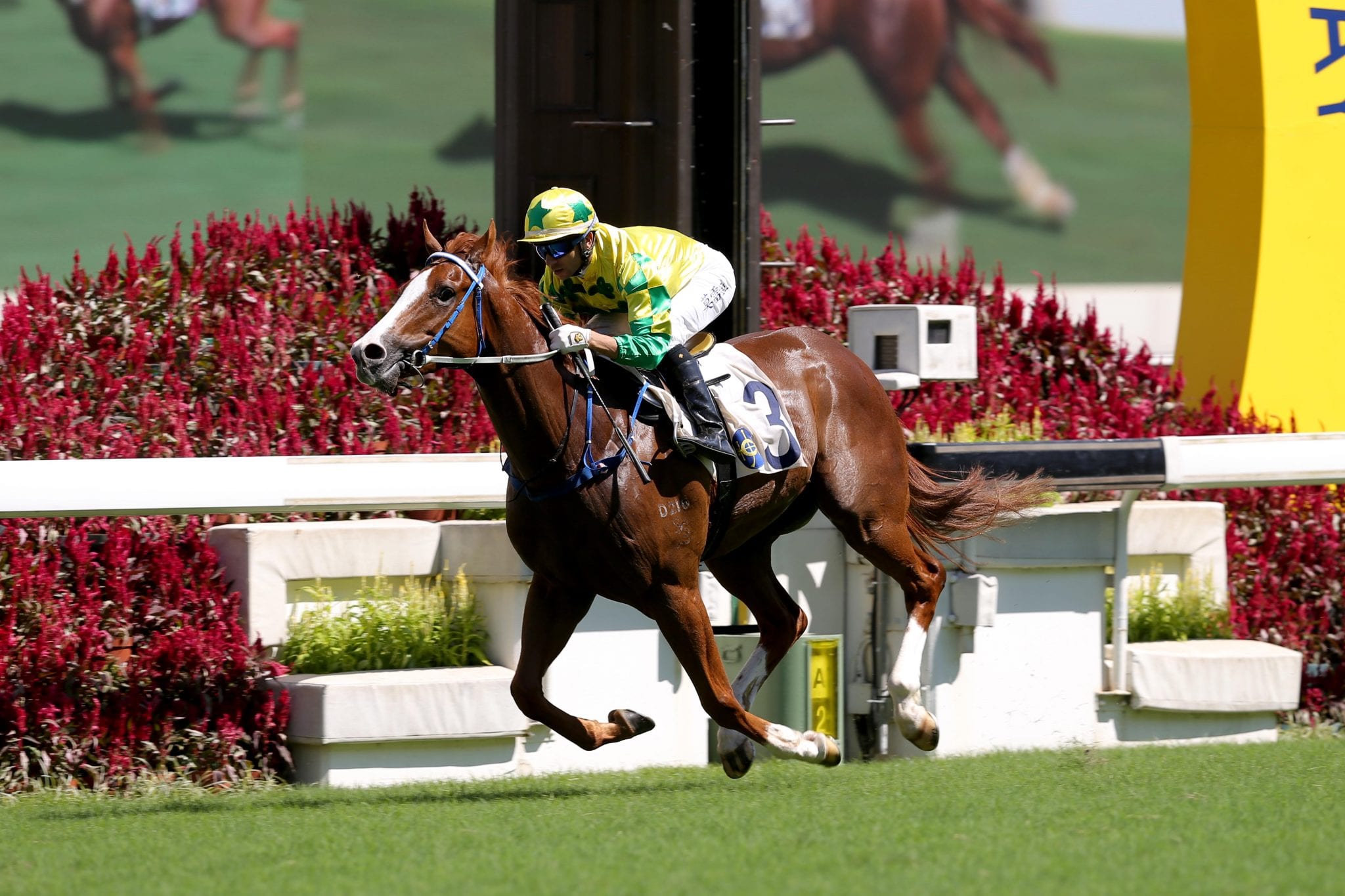 Sky Field made a big statement before the break between seasons and this Sunday (13 September) at Sha Tin he readies for his return in the Class 3 Hung Hom Handicap (1200m), with the Four-Year-Old Classic Series on his radar.

“It’s a big season for him, so I’m treating him like a horse with a lot of potential and the type of horse that I would train for the Hong Kong Classic Mile – that’s my target with him this season, so he’ll be progressing distance-wise,” trainer Caspar Fownes said.

The progressive four-year-old displayed an electrifying turn-of-foot at Sha Tin on the final day of last season to lay down a marker as one of Hong Kong’s most exciting up-and-coming gallopers. That effort resulted in a 14-point rise in the ratings.

“He’s done really well between seasons, I haven’t trialled him for his upcoming start because he’s got that residual fitness from the end of last season and he’s had a couple of pieces of work on the grass; I think I’ve got him pretty much where I want him for his first-up run,” Fownes said.

The Deep Field youngster has one win from three starts now after destroying his rivals over 1200m, the same distance he contests this weekend against 10 others. He will break from gate eight with three-time champion jockey Joao Moreira in the plate.

“I’m still learning about the horse himself as I have only been on him once at the races but what impressed me the most was his acceleration in the straight, that’s what it takes for a good horse to go to the Classic Mile and be competitive,” Moreira said.

The chestnut gelding put leg problems behind him earlier this year and since then has gone from strength-to-strength but Fownes indicated that he is still a work in progress, especially as he heads towards the HK$12 million age-restricted mile contest. “He’s had a couple of niggling issues which we’ve just tried to look after and nurse him along,” Fownes said.

“It’s a little bit of a tricky barrier but he’s got to learn to race – he’s still inexperienced, he still needs to know how to race, so he’ll just go back and we’ll teach him again and if he gets one or two races wrong through the prep that’s part of his learning process.

“The one thing that he does have is an explosive turn-of-foot and once he really gets to know what his job is, I think then you’ll see a pretty handy horse after the next couple of starts.”

Sunday’s contest sets up an interesting clash against another rising talent, Inner Flame. The Douglas Whyte-trained galloper is a four-time winner from five starts – incurring a 28-point rating-rise in the process – while the field also contains five other winners.

“He’s definitely striking a field with a lot of depth,” Fownes said. “There’s some really good progressive horses in there, so it’s a great starting point for us to see exactly where we are at, and, hopefully we’ll be very competitive and make our presence felt.”

Despite foregoing a barrier trial, Sky Field has galloped alongside 2020 Group 1 FWD Champions Mile winner Southern Legend in preparation for his upcoming test. Moreira has been in the plate for his key workouts, including a leg-stretch on the grass on Thursday (10 September) morning.

“I’m extremely happy with his progress, I was on him (on Thursday) and once again he gave me the feel that he is ready to go to the races – I would be very disappointed if he goes there and does not perform,” Moreira said.

The Brazilian was in the plate for the gelding’s crushing four-length win and is looking forward to what the 2020/21 season has in store for him.

“He was very impressive when he won last start, we all know that as he goes up in class he is going to face tougher competition, and some horses in this race are quite promising, but the way he won last time gives me confidence that he’s going to go up in class and can be very competitive,” Moreira said.

“He’s not the type of horse that is going to challenge anyone for the speed, of course: I am going to hope that the pace is genuine enough to give a horse that settles midfield, which is where he is likely going to be, a chance to flash home,” he said.

Zac Purton bagged a fantastic four-timer on Wednesday (9 September) at Happy Valley to gain the top spot on the premiership table with six wins, and he heads to the big course on Sunday with nine chances on the 10-race card, including last-start winner Regency Master in the Class 4 Tsim Sha Tsui Handicap (1600m).

“I thought his last win was a solid effort, he had been working his way toward putting a performance like that together; he was a little bit weak and it just took him a little bit of time, and he needed to get up over a little bit of ground,” Purton said.

The Danny Shum-trained galloper pieced it all together at his sixth Hong Kong start and draws gate one for Sunday’s contest against nine opponents.

“It was probably the first time he’s actually got out of the gates as comfortably as he did and been able to travel like he did in the run, the pace really suited him, he was in a nice rhythm and it all unfolded well for him but he still had to do it – he’s a young horse that is going to improve,” Purton said.