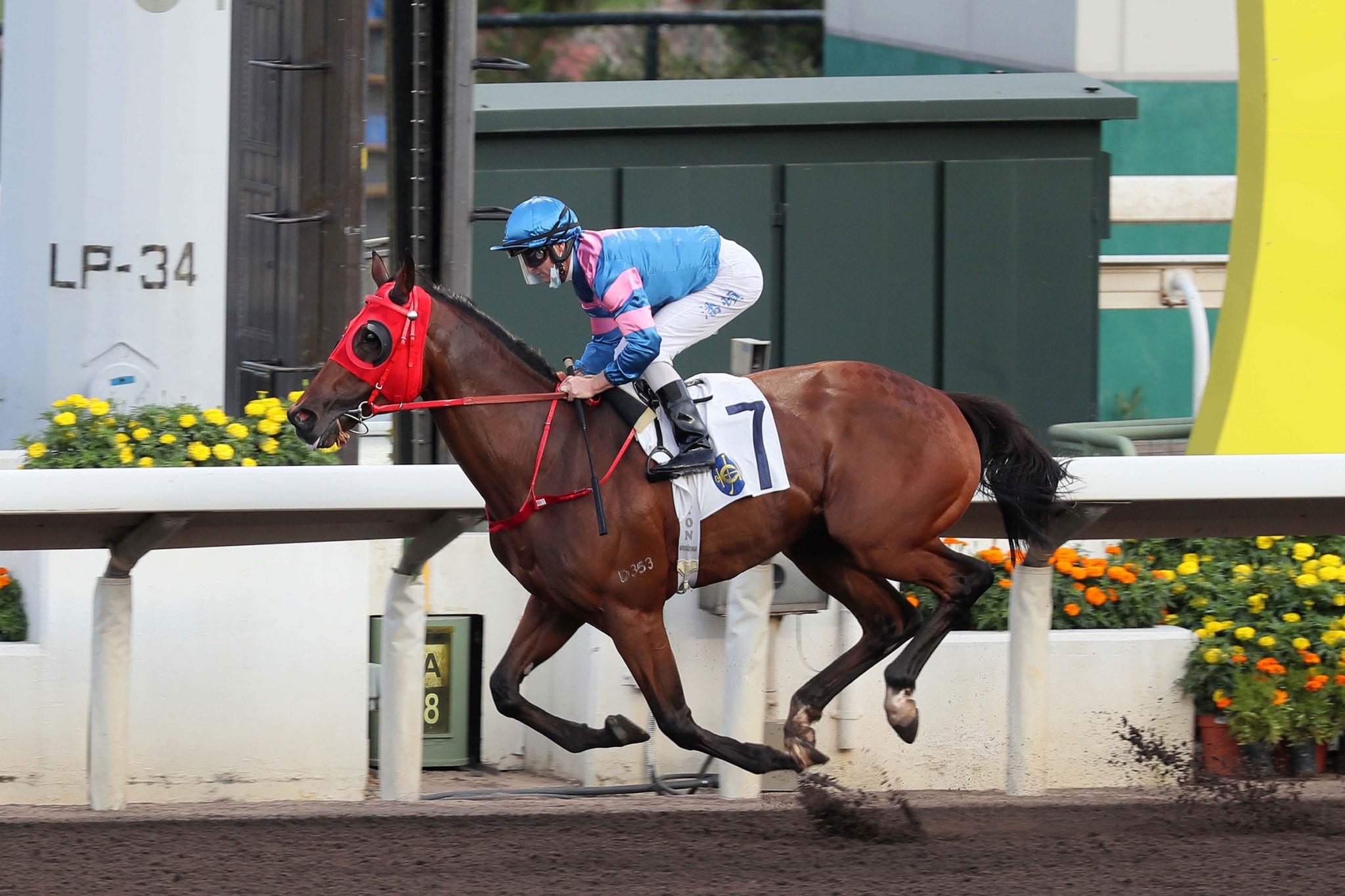 While COVID-19 remains the largest impediment to Shum’s ambitions, he has little doubt the Lookin At Lucky gelding can acquit himself strongly regardless of where the horse travels.

“If the virus situation has improved, we can look to take the horse overseas,” Shum said. “It was a good win, the time was fast. I was surprised he beat the record – he is very good. It was a very good ride by Zac to just hold the pace, very impressive.”

Hongkong Great built a phenomenal record overseas on turf before arriving in Hong Kong, winning three Group 1s in Chile, before uncovering a penchant for the dirt by posting three wins on the surface from eight starts this season.

Purton now trails Joao Moreira by 14 wins – 105 to 119 – as the battle for jockeys’ championship honours follows a familiar plot with 18 meetings left to the end of the season.

The Australian said the apparent ease of Hongkong Great’s victory belied the difficulty of controlling the horse.

“He’s not the easiest horse to ride because he’s so strong-willed,” the four-time champion jockey said. “He gets on the bit and really wants to get on with it. I was fortunate he wasn’t pressured and I was able to get him into a nice rhythm.

“I think as time goes on, and as he gets more racing under his belt and relaxes a bit more, he’s going to be better.”

Winding his way through traffic from the home-turn, the three-year-old clocked the fastest last 400m of the meeting – a blistering 21.81s – as Moreira coaxed the best out of the flighty youngster.

“It’s nice that the horse knuckled down and showed us what he’s got. We always feel that he’s got a very big engine and he’s still very young and immature and learning his trade,” Fownes said.

After 231 rides, Jack Wong’s dogged persistence paid off – and drew the support of an admiring jockey cohort – after the 27-year-old registered his first win of the season when Francis Lui’s Skyey Supreme prevailed in the Class 3 Chamomile Handicap (1650m, dirt).

“I’m happy because it was a winner, but it’s already near the end of the season and I’m on the bottom of the list. On the other hand, however, I appreciate the support from Francis (Lui) and the owner to give me a chance on their horse,” Wong, who now has 86 Hong Kong career wins, said.

“Today, I got the draw (barrier three) and a nice weight (113lb), so the circumstances gave me a nice, easy travel in the run so the horse was able to win.

“This the latest I’ve waited to get a winner in a season. But I’ll continue to do all the fitness, all the trackwork and talking to trainers and I’m always doing as much as I can. I just get what I can get and see if I can give them a bit of a surprise.”

Riding in Hong Kong on a three-month contract until the end of the season in July, Bentley was elated to register his second win from his 36th outing.

“It’s really great to get on the board here and I’ve had a few horses that were not quite there for whatever reason but this horse travelled nicely,” Bentley said after adding to his Happy Valley victory on Douglas Whyte’s Vincy last month.

“He (Red Elysees) was always in a position that I was happy with. I actually watched the last time when he won here (7 February, 2019) when Silvestre (de Sousa) was on him. He galloped all the way through the line and as I say, it’s just great to get a winner here at Sha Tin and to keep rolling.”

Whyte and Jerry Chau, bristling with confidence after trebles at Happy Valley on Wednesday (5 May), built on impressive momentum by combining with First Responder to secure the second section of the Class 4 Daphne Handicap (1200m).

Competing at his first meeting after his claim was trimmed to five pounds, Chau posted his 40th winner of a memorable season, while Whyte cemented his place in the top-10 of the trainers’ championship with a double.

The South African’s second victor of the program came via Super Ten, who scrambled home by a nose over Hall Of Champ to snare the Class 3 Celosia Handicap (1400m) under Alexis Badel.

David Hall’s persistence was rewarded when Kung Fu Tea snared the Class 5 Lotus Handicap (1400m) under Zac Purton despite waywardness in the straight.

“He’s still running in, he’s still doing a few little things wrong. He’s not a horse that’s had a lot of racing, so hopefully he can improve a little bit more. He’s by Shocking, so perhaps he can run a little bit further distance.

“Hopefully there’s a bit more scope to go with the horse. He’s lightly-raced and he’s had a lot of issues – mainly leg issues and he’s had a heart problem, so it’s taken a long time.

“Let’s hope he can keep on improving from here. Zac has done a lot of work on the horse over the journey. He’s always had his eye on him and knew he had potential.”

Purton made a perfect start to the program, teaming with Me Tsui to claim the first section of the Class 4 Daphne Handicap (1200m) with Eligere. A son of Choisir, the five-year-old broke through at his 20th Hong Kong start after winning at Moonee Valley Racecourse in Melbourne in 2018 when trained by Michael Hibbs.

Karis Teetan posted his sixth win of the season for trainer Tony Cruz when Peach Blossoms (123lb) edged out Unicornbaby (132lb) to land the Class 4 Erica Handicap (1400m). A winner at Sale Racecourse in Australia when known as Chasing Returns, Peach Blossoms had been unplaced in eight previous Hong Kong attempts.