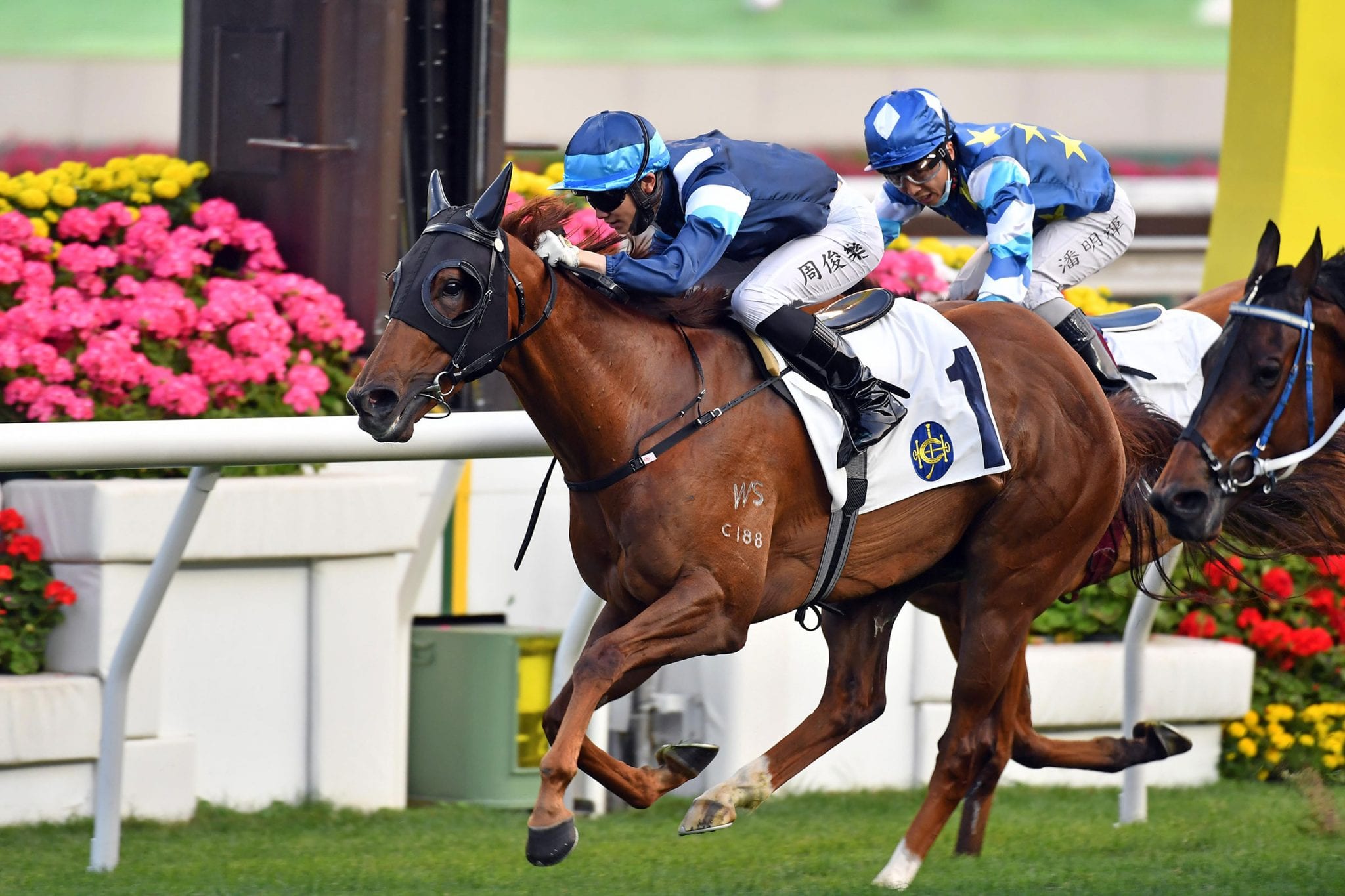 Frustrated by the five-year-old’s habit of botching starts, O’Sullivan requested permission to use a blindfold on the chestnut and, with the cooperation of barrier staff and starter Tony Speechley, O’Sullivan’s toil was rewarded in the HK$2.2 million contest.

“The problem has been that he jumps in the air when the gates open, he’s been rocking up and jumping up in the air,” the New Zealander said.

“Tony Speechley said they’ve now got a man on his tail in the barriers, so they walk in the gate (with the horse), put a blindfold on in the gate and as soon as he’s got the blindfold on, he just stands still.

“If you’re lucky enough, you coincide getting the blindfold off pretty closely with the jump.

“We’ve been doing it the last three starts and he’s pinged it – he deserved that win, he’s a good tough horse.”

The neck margin Duke Wai held over The Crown, who charged from midfield, in the highlight race of the program vindicated the value of O’Sullivan’s horsemanship and provided the Kiwi trainer and apprentice Jerry Chau with doubles.

Chau posted his 32nd winner of the season with Duke Wai after earlier delivering a precision front-running display on Super Ten for Douglas Whyte to prevail in the first section of the Class 4 Wong Chuk Wan Handicap (1400m).

“We nearly got beat (on Duke Wai) but Mr O’Sullivan told me to jump him out first because sometimes he jumps slowly,” Chau, 20, said.

“Two starts ago, we tried the blindfold before he jumped and we did the same thing today and it worked. Today, he was very strong and I let him roll forward – I didn’t want to push him and today he just kept going.

“Getting a double is very good for me and it’s also very good that I was able to ride a winner for my boss (Douglas Whyte).”

“He had to dig deep for it,” Purton said after Danny Shum’s speedster momentarily lost touch with leader and eventual runner-up Brilliant Fortune halfway up the straight.

“But there was a little bit of (a tail) wind today, which helped, but he was never in his rhythm today – he was always under pressure, he was struggling to keep up and then he was gone a long way out.

“I really had to start riding him hard and I was just hoping I could stay in touch with Joao (Moreira) because I thought his horse (Brilliant Fortune) would be soft on the line and my horse would be strong.

“It was just a matter of staying in touch and, slowly but surely, we got there. I think the horse’s class got him there but I think he might be looking for further now.”

“You can see over the last 400 metres, Zac really had to get stuck in to make him go, which means they were going too fast. The time was really good, 55.24s – 1.1s faster than standard time – so that’s amazing for a horse with just three starts.

“So now I’ve got a good problem on my hands. I need to really study the film and work out what to do. For me, his condition is just 85 per cent – he’s not 100 per cent yet – but he’s got ability, no doubt.

“When you see him in his trials, he still throws his head around, he’s still got improvement to come.”

Paul O’Sullivan praised Kungfumaster Panda after the veteran staved off a class drop with victory in the Class 4 Wong Ma Tei Handicap (2000m) under Derek Leung.

“Today was to prove if he had to go back to Class 5 to win again or stay in Class 4 and he’s won right at the bottom of Class 4 – it doesn’t get any easier for him,” O’Sullivan said.

“He’s done a great job this season – he’s won a couple of races.”

Joao Moreira continued another astonishing season with a brace.

Moreira’s compatriot Ruan Maia found the winner’s enclosure with City Legend for Benno Yung in the second section of the Class 4 Wong Chuk Wan Handicap (1400m), timing a winning surge on the seven-year-old gelding to perfection.

Yiu notched a double through Golden Link, who triumphed in the Class 3 Sham Chung Handicap (1400m) for Matthew Chadwick.