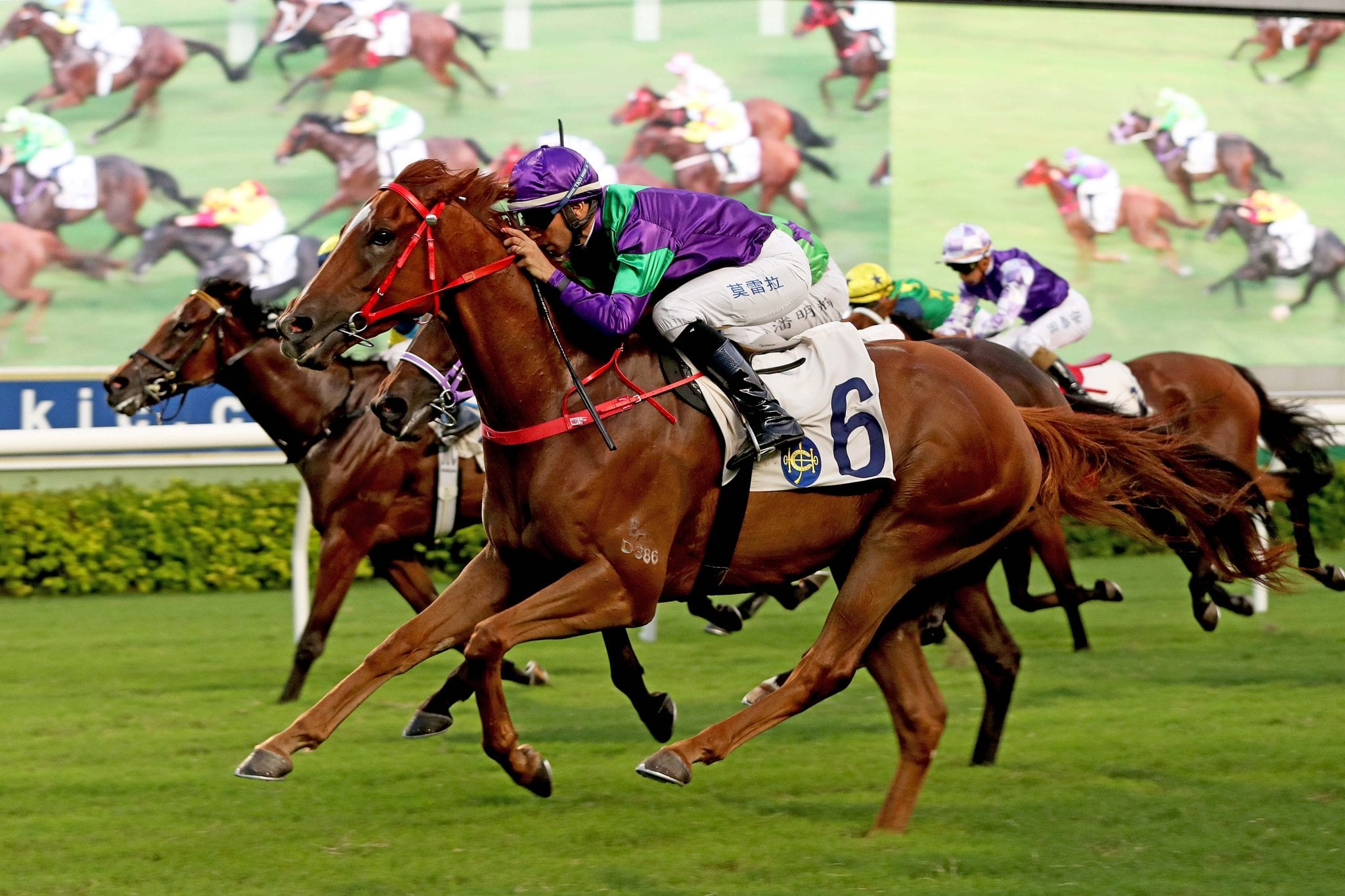 The exciting John Size-trained gelding beat a classy field of experienced gallopers to cement his status as a leading contender for this season’s three-race Four-Year-Old Classic Series which begins with the HK$12 million Hong Kong Classic Mile (24 January, 2021)

“He didn’t sort of blow them away today but he certainly did the job,” Size said, “he’s got himself to a rating that’s comfortable to be an aspirant of the Four-Year-Old Classic Series – so I’m happy with that. “His temperament is good – he’s sound, he does well and now that he’s got that rating he can have a break.”

Excellent Proposal took his impressive record to three wins from four starts with today’s half-length score, and he’s now ticked off both the Classic Mile (1600m) and Classic Cup (1800m) trips. While the Derby distance of 2000 metres remains an unknown, it is of no concern to winning jockey Joao Moreira: “I don’t see any problem with that,” he said.

“He’s been coping with everything that we have put to him. Fortunately today we didn’t get caught four-deep like last time but he prevailed showing that he’s the best horse in the field and the way that he won he proved that,” Moreira said.

The Australian-bred four-year-old finished second on debut last term and this season is unbeaten in three starts, firstly over 1400m, then 1600m and 1800m today.

“He’s a very kind and relaxed horse, I couldn’t be more delighted than what I am with this guy – he’s got a bright future,” Moreira said.

“He knows what racing is about and for me as a jockey I just have to try and not complicate it, to try and avoid him getting a bump or check, to get him a smooth race which once again was the case. This type of horse always makes a jockey’s life easier,” Moreira said.

“It’s been great,” Fownes said. “I haven’t been training for that long really but 900 wins is a good milestone and I’m looking forward to the 1000 – that’s the next target and hopefully we’ll get that in the next two seasons.”

Fownes was first licensed for the 2003/04 racing season after assisting his late father Lawrie Fownes, a pioneer of Hong Kong racing. “There’s been so many moments – I have so much passion for this game because we know what goes on behind the scenes with horses, they can break your heart with the problems they have and when you come out there and get the results it’s so rewarding.

“Most of the public and everyone are just watching the results, they don’t know what goes on behind the scenes – we work really hard, all of the trainers in Hong Kong and we try to do our best to get these horses out there week in and week out to perform,” Fownes said.

Fownes’ many credits include the 2006 Hong Kong Mile with The Duke, 2011 Hong Kong Sprit with Lucky Nine and the 2010 Hong Kong Derby with Super Satin plus international success in Singapore with Green Birdie, Lucky Nine and in more recent years with Southern Legend, who won back-to-back Kranji Miles.

Today’s milestone came in Class 3 and while not the dizzying heights that Fownes has scaled previously, it was still a special win nonetheless. “It’s great to get it with a horse like that, who has had his share of issues – I thought I had him really well prepared for this race – his trials were good,” Fownes said.

Douglas Whyte and Zac Purton combined for their first win together yesterday at Sha Tin with Temple Of Heaven who captured the Class 3 Mui Wo Handicap (1400m).

The pair were fierce competitors in the jockeys’ room, with Purton ending Whyte’s 13 consecutive champion jockey titles, but today the pair were on the same side, linking for their first win as trainer and jockey.

“I’m in a different role now and he’s taken over where I left off, he deserves to be winning races and his performances are showing that as he’s riding very well,” Whyte said.

The Northern Hemisphere three-year-old scored at his third start thanks to a strong finishing ride from the Australian ace to win by a short-head.

“He’s been a little bit green and he’s taken a long time to learn things, even in the mornings, he was a bit too keen and he wanted to do things upside down but his last run indicated that he was coming to hand,” Whyte said.

The Iffraaj gelding was a three-time winner pre-import in Great Britain when under the care of Richard Hannon; his latest win prior to his arrival, a five-length romp on the Tapeta track at Newcastle.

“He didn’t have much luck previously and I think he’s always wanted to step up to 1400 metres, it was just a matter of him needing those runs underneath his belt before I stepped him up, otherwise he would have been a bit too keen but it was a good ride by Zac (Purton),” Whyte said.

The Danerich galloper scored his first win since mid-2018, putting a frustrating run of outs and injury concerns behind him to grab his second win at his 11th start.

Shinn’s off the mark

Blake Shinn secured his first win for the new season as the David Hall-trained Plikclone outlasted his rivals in the Class 5 Tung Chung Handicap (1400m).

“I was very happy to get that one out of the way,” Shinn said, “it’s been a little while coming to get that breakthrough win, as we know, Hong Kong is all about winning and once you win you get better opportunities – it’s been tough to get good opportunities.”

The Melbourne Cup-winning jockey broke through at his 34th ride in the 78th race of the season, highlighting the toughness and competitive nature of riding in Hong Kong.

“I feel people wanting me to do well in Hong Kong but it’s about winning and it’s a tough business here, there are some world-class jockeys so I’m just pleased to get that one out of the way and keep moving forward now.

“I’m hoping I can hang in there, get some more opportunities to keep extending my contract and keep trying to improve up the ranks as a leading rider in Hong Kong,” Shinn said.

Matthew Chadwick and Tony Cruz successfully combined for the second time in as many race meetings as Diamond Pegasus registered a tough victory in the Class 4 Tong Fuk Handicap (1200m).

The Snitzel gelding was headed in the straight by Jade Phoenix but rallied under Chadwick to get his nose in front when it mattered the most.

Chadwick then bagged a double by taking the second of two dirt contests, the Class 4 Tai O Handicap (1650m) aboard Chung Wah Spirit.

The Benno Yung-trained You Have My Word was wayward in the straight but kept kicking to grab the opener, the Class 5 Yi Oi Handicap (1800m) for Chad Schofield.