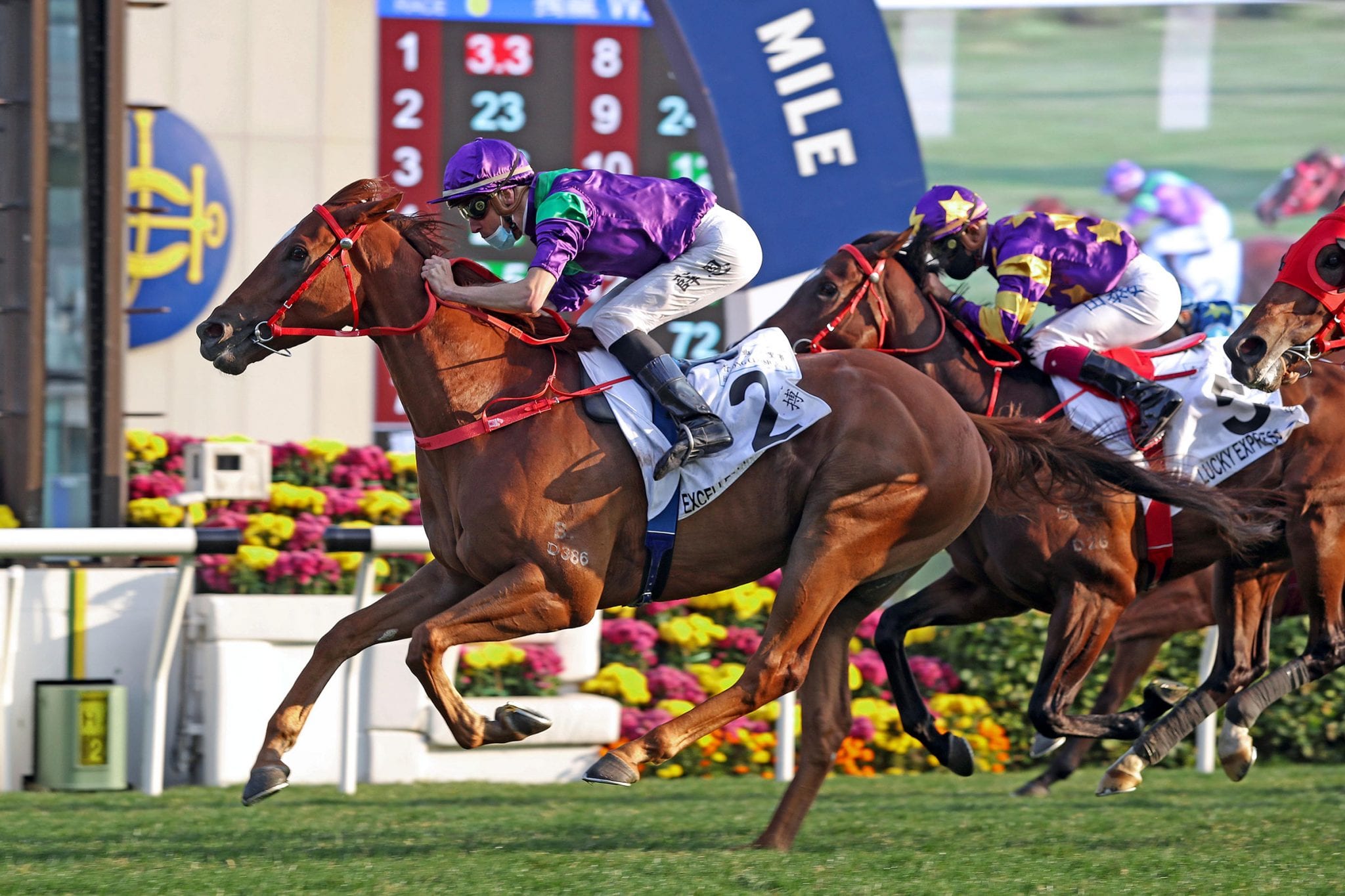 The 2021 BMW Hong Kong Derby (2000m) barrier draw was conducted at Sha Tin Racecourse yesterday (Thursday, 18 March) and trainer John Size indicated his approval with where his trio – Excellent Proposal, Lucky Express and Silver Express – will jump from in Hong Kong’s most prestigious and sought-after race at Sha Tin this Sunday (21 March).

Chasing his fourth win in the HK$24 million contest, Size, an 11-time champion trainer in Hong Kong, doesn’t envisage any changes to the tactics regarding his three following the barrier draw.

Excellent Proposal, the Hong Kong Classic Mile winner, will set off from gate eight in his bid to book-end the Four-Year-Old Classic Series.

“It’s the middle of the field but I think from there he’ll probably go back to his normal position, which is worse than midfield – hopefully he can get closer to the inside from there and he should get a reasonable run from that draw,” Size said.

The gifted chestnut is a four-time winner in his new home after arriving from Australia in February last year, and his most recent run returned a close-up fourth in the Hong Kong Classic Cup (1800m) behind Healthy Happy who dictated proceedings from the front.

“He seems in pretty good shape, he’s done pretty well at home, he’s sound, he’s healthy and his trial was quite normal for him – he looked good, so I think he’s in good shape,” Size said.

Blake Shinn who partnered the Exceed And Excel gelding to victory in the Hong Kong Classic Mile is again in the plate this weekend.

“I’m pretty comfortable with barrier eight, it’s a middle of the line draw, he’ll have all the main chances around us – I’m happy,” Shinn said.

“He’s (Excellent Proposal) by Exceed And Excel so he wouldn’t normally be a horse that you would pick to be a stayer but this particular race depends on the circumstances and sometimes horses that don’t look like stayers can run in the money,” the handler said.

Lucky Express, who finished second in the Hong Kong Classic Mile to Excellent Proposal, will set off beside him in gate nine among the 14-runner field.

The Toronado gelding endured an interrupted run in the second leg of the Four-Year-Old Classic Series and didn’t appear to be fully tested over the nine furlongs that day.

“He looked like he had a beautiful run around to the top of the straight and then he was held up for some time in the run home, so we didn’t get a look at him that day and it’s hard to tell where exactly he would have finished but it would be fair to say he probably could have finished a bit closer,” Size said.

Frenchman Antoine Hamelin pairs with the galloper who is a one-time winner in Hong Kong for his new connections. The four-year-old was a two-time winner in Australia prior to export over 1000m and 1200m respectively from three starts.

“He’s had three runs at a mile and one at 1800 metres, he’s still on track and he’s in good shape; the racing doesn’t seem to have harmed him, he looks good and he’s in good order,” Size said. “So we’ll go to the races and see if he can have some luck.”

Silver Express, an all-the-way winner last-start over 1400m, has drawn gate one as he steps into the unknown having never raced beyond seven furlongs in both Australia and Hong Kong.

“He’s probably one run short, it would have been nice to have one more run with him but that didn’t come and he was a little bit wayward at his first two starts, particularly his second start and then he put it all together when he had his third run,” Size said.

“But he certainly showed good ability the day that he won and it’s going to be very interesting to see where he goes in life and even in this race,” he added.

A comfortable victor last start from the front, Size designated that the Canford Cliffs gelding will once again be likely to roll forward and settle close to the speed.

“He would be up on the pace no matter where he drew, but he might get around the first bend doing a little less work because of that gate, so that’ll help him save some energy for the finish,” the 66-year-old said.

Matthew Chadwick who bagged a double at Happy Valley’s midweek fixture will take the reins this weekend.

Size though, expects circumstances and luck in running to play a big role in Sunday’s “blue riband” which was first run in 1873.

“There’s a big group of horses in this race that have similar ratings, they’re all in very good form and I think just the circumstances on the day will determine the winner,” he said.

“I wouldn’t be degrading these horses, I just think there is a number of very good horses in the race that just happen to be evenly matched – that’s the difference,” Size added.

“Draw 11 is very tricky, all the competitors have got better draws,” Shum said. “The speed is all on the inside and we won’t be able to cross them – we don’t want to be stuck three-wide with no cover.”

The Australian-bred finished third in the 2020 G1 Australian Derby (2400m) at Randwick Racecourse prior to export.

Sky Darci, the highest rated horse in the race and a five-time winner in Hong Kong, came up with gate two in his bid to give trainer Caspar Fownes a second Derby triumph after Super Satin (2010).

“I’m very pleased with that draw – he needs a soft gate and I’m very happy, it’s going to give him his chance,” Fownes said.

The 103-rater will be paired with championship-leading jockey Joao Moreira.

“He ran alright in the Classic Mile he was just a little bit flat but the run after that in the Classic Cup was good, it was pleasing to the eye – he definitely didn’t have a clear run at them and he was only beaten by two and a quarter lengths,” Fownes said.

“But we’ve persevered with him to give him his chance to run the trip, he’s had a great preparation for this race and he’s as fit as I can get him – he looks a treat,” he added.

“He’ll get the trip and plus, so he’s going to have every answer – that’s the beauty of being drawn where he is, Karis (Teetan) can now use the draw and ride a race,” Whyte said of Russian Emperor, runner-up in the Hong Kong Classic Cup.

David Hayes also received a mixed bag as Conqueror was dished up gate 13, while dual Australian Group 1 winner Shadow Hero will set off from gate seven with Zac Purton engaged.

Tony Millard’s duo of Panfield and Maximus drew gate 12 and gate four, respectively. The handler is looking for his third win in the race after the heroics of Keen Winner (2000) and the brilliant Ambitious Dragon (2011).

Tony Cruz will saddle two in his bid for a third win in the race as a trainer after Lucky Owners (2004) and Helene Mascot (2008) triumphed. His duo, Delightful Laos and Packing Waltham received barriers 10 and six respectively.