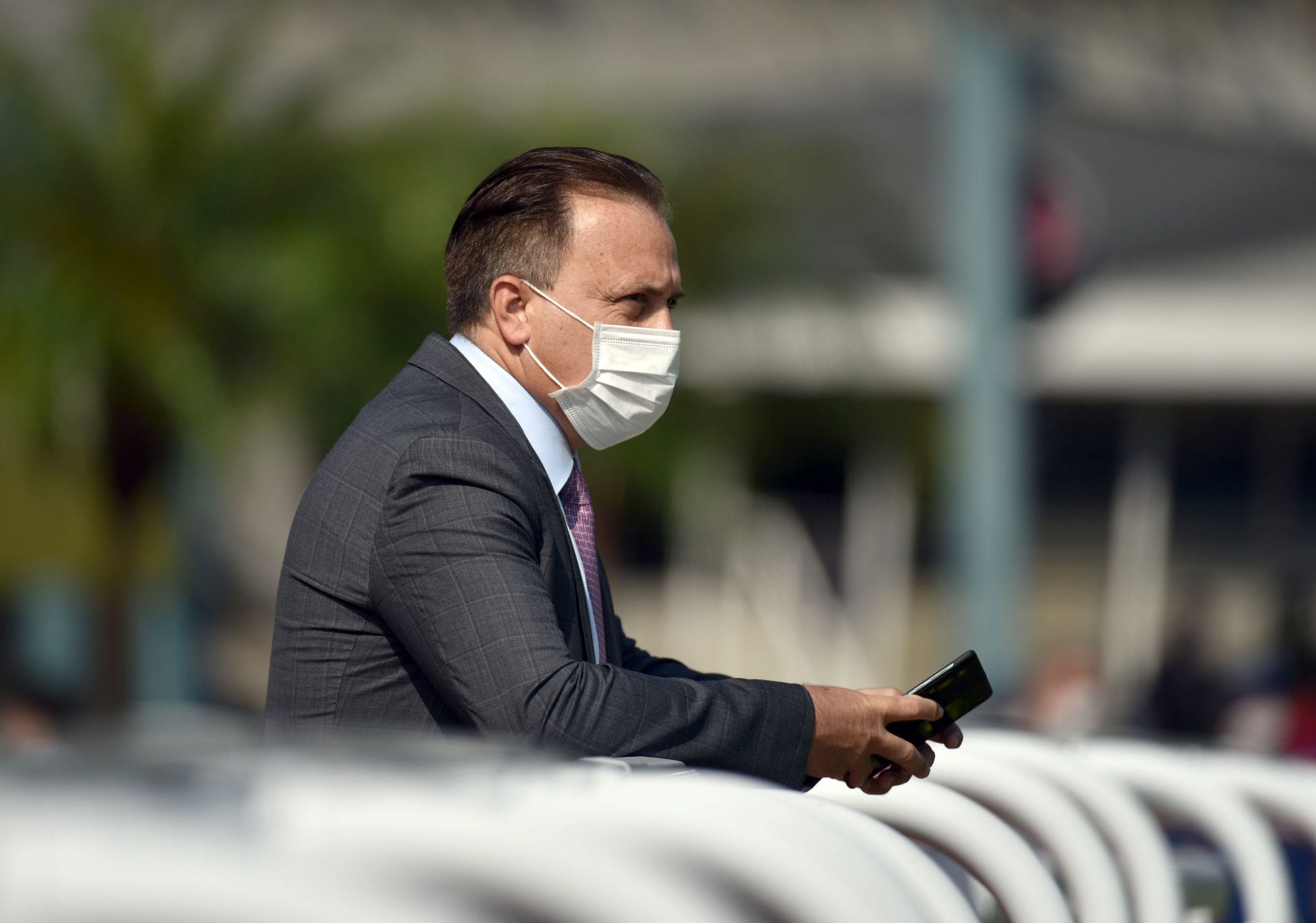 Something has to give at Sha Tin on Saturday (24 October) as two of Hong Kong’s hottest young properties put impressive winning streaks on the line.

The clash between Mighty Giant (129lb) and Sky Field (123lb) in the Class 2 Argyle Handicap (1400m) is the clear highlight of the day with all the elements of a thrilling finale.

First, it sees last season’s champion trainer Ricky Yiu against Caspar Fownes, who has made no secret of his desire to seize the crown and has come out firing with 15 winners to be four clear of Frankie Lor atop the table.

Second, it pits a resurgent Joao Moreira against a hungry champion jockey Zac Purton, who goes into the weekend seeking to reignite his title challenge after a 30-race losing streak, his longest for four years.

Most of all, Saturday’s race features two richly promising horses with starkly contrasting running styles and Fownes feels that Sky Field’s racing manners and a possible change in tactics hold the key to solving the puzzle.

The flashy chestnut bounded through Class 4 and Class 3 tasks with a trio of striking 1200m wins but a tendency to race freely under restraint from Moreira resurfaced on his latest start and Fownes concedes that this maiden voyage over 1400m needs to go smoothly if hopes of a tilt at the Hong Kong Classic Mile in January are to be realistic.

“It’s a testing race for us this weekend,” he said. “Sky Field’s ability’s not in question, it’s just he’s still doing a few things wrong. I gave him a trial last Friday just to try and teach him to learn a bit more and again he wanted to just come out and do his own thing.

“But I said to Joao that it doesn’t matter if he wants to get out on the lead as he might just switch off in front. We’re not going to go out with an exact game plan. We’re just going to try and have the horse as comfortable as we can get him without him wanting to get on with it.

“He’s still learning and this is a good test with a couple of nice, handy horses in there and this will tell us where we are at this stage of his career. There’s big money everywhere for this type of horse and if it means we’ve got to sprint him to do that then we’ll do that. I still believe he should run the trip out strong but, like anything, he’s got to do it the right way.”

Fownes is unperturbed by the fact that Sky Field took a little while to subdue the unfancied Keep You Warm three weeks ago and is confident that a new rating of 88 still underplays the four-year-old’s potential.

“It was a soft win, Joao had a lot more there,” he added. “Trust me, he’s very much a triple figures horse, that’s not an issue. He’s probably six to twelve months away from being physically and mentally at his peak. Probably next December is where we’ll see him at his best but, in the interim period, he’s got to get his way into triple figures and then we’ll see where we go.”

Zac Purton has been around the Hong Kong beat too long to let a dry spell concern him and sums up his recent frustrating run – which has featured five seconds and five thirds since Beluga’s Sha Tin success two weeks ago – in typically pragmatic manner.

“It’s just the way the ball bounces sometimes, it’ll bounce my way again soon,” he said. The Australian has nine chances to resume normal service on Saturday and is hoping Mighty Giant can continue a run of progression that has taken him from an initial rating of 52 to his current mark of 94.

Mighty Giant thrived in the second half of last season, winning four times over course and distance, and the muscular five-year-old looked better than ever on the same National Day card as Sky Field, helping force a searching pace from stall 13 on his Class 2 debut then responding generously to hold on by half a length as earlier exertions began to take a toll.

Yiu feels a summer spell in Conghua was a big help to Mighty Giant and is bullish about his prospects of another success, declaring that the son of Power is “one hundred per cent ready for Group racing” and that “he’s really well and takes his races so easily.”

Purton is more circumspect but, perhaps mindful that Father Time is tugging at the tail of old ally Beauty Generation, is hoping to see Yiu’s assessment borne out this season.

“Mighty Giant has done everything right in his time here in Hong Kong,” he said. “He’s well named as he’s a very big horse with a big, long action and he likes to get out there and roll along.

“It was a tough effort last time first up, so you’ve got to question how much it took out of him and whether he’s going to be flat for this run but Ricky’s happy with him and there’s nothing to suggest that he’s not going to run well.”

“He continues to do things that some horses can’t, he gets up there on fast speeds and continues to raise the bar every time. I’m very light on horses at the top end at the moment so hopefully he can take that step and fill a bit of a hole.”

Yiu has labelled Saturday’s clash “a two-horse race” but Class 2 competition is seldom quite so clear cut and the opposition includes smart known quantities and a couple of potential improvers.

Ballistic King (125lb) and General’s Delight (129lb) have the assistance of in-form Neil Callan and Jerry Chau for the first time having finished fourth and eighth behind Mighty Giant last time, while lightly-raced Lucky Express (125lb) looked ready for this step up to 1400m on his latest start and newcomer Maximus (117lb) won four from four in Europe before catching the eye chasing home Sky Field in last week’s barrier trial.

Losing runs are all relative and Lockheed’s barren patch, which stretches back to a Goodwood maiden win for William Haggas in July 2016, makes Zac Purton’s recent lean spell look nothing in comparison.

“He’s had plenty of chances but just can’t seem to get it done,” said Purton. “He’s loomed up on a number of occasions but he just doesn’t quite go through with it. One day he’ll win but when that day’s going to be, I don’t know.”

Saturday’s Class 3 Dundas Handicap (1200m) provides the chance for Danny Shum’s gelding to salute at the 24th attempt in Hong Kong and, in theory at least, the grey is fairly treated from the same mark as when splitting subsequent winners Sky Field and Cruising over course and distance on his reappearance.

However, Purton has seen too many false dawns from the grey to take anything for granted in a race where recent winner Big Fortune (128lb), in-form Biz Power (123lb) and lightly-raced Conghua trial winner Winning Brew (121lb) all hold solid credentials.

“Lockheed travelled into it like he was going to deliver a lot and didn’t give much at all which is why he was able to get run down,” added Purton.

“Right from the first day he came here he’s been an exceptionally good worker. He can work with anything but it’s that last little bit when you want an effort he can’t quite give it to you.”