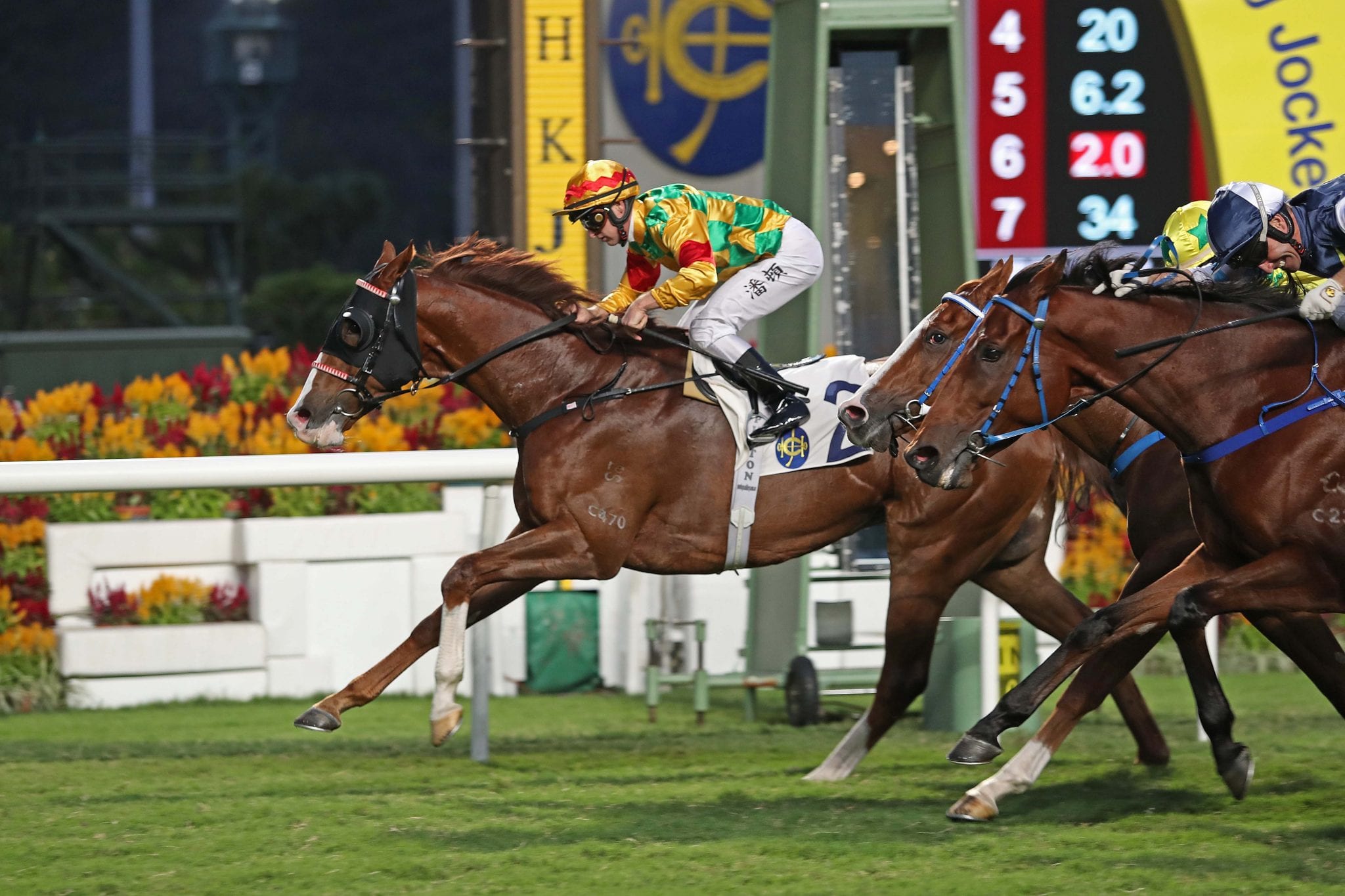 The smart chestnut broke evenly from gate 10 under Zac Purton, who mustered his mount forward to settle close to the speed. Mighty Giant hit the front at the 200m mark and kept smart rivals at bay for a neck winning margin.

“He’s an honest horse, he gets up there and makes his own luck and he’s a fighter – he’s a winner,” Purton said of the five-year-old.

The win sealed a treble for Purton, who earlier in the afternoon had ended a 33-ride winless streak stretching back to 11 October.

“The pace early on absolutely suited my horse according to Zac Purton, and he travelled as a lovely horse,” Yiu said. “He was so relaxed and he was always waiting for the signal and once he asked him to kick he really accelerated – a lovely horse.”

The Power gelding takes his record to six wins from nine starts and Yiu is eyeing a pair of Class 1 contests as the chestnut’s next start before a potential tilt toward the HK$25 million LONGINES Hong Kong Mile.

“I spoke to Zac right after the race, there’s a few feature races we have to think about but I’m not sure which one we’ll go for: there’s the Panasonic Cup over 1400m and the Chevalier Cup over the mile next month, there’s a lot of time to make a decision,” Yiu said.

“He’s always had problems, so I’m very thankful to the owner who has been patient and has given me a lot time,” Shum said.

The grey was a Group 1 placegetter pre-import, having finished third in the Group 1 National Stakes at the Curragh as a two-year-old when under the care of trainer William Haggas.

The win secured a double for Shum, who claimed the race prior with Baltic Success in the Class 3 Bedford Handicap (1000m) under Jerry Chau, who also took two winners on the card. The apprentice earlier claimed the Class 4 Pitt Handicap (1400m) aboard the Francis Lui-trained Sunny Star.

Courier Wonder was the talk of Sha Tin with a dazzling debut success that had trainer John Size brimming with anticipation for what his talented youngster has in store.

“I’m very excited to have a horse like that, I haven’t had one for a while and I was wondering at the beginning of this season where the good horse was going to come from and I think we’ve found one already,” Size said.

The 11-time champion trainer is no stranger to unveiling a good one on debut, with the likes of recent Group 1 winners Beat The Clock, Mr Stunning and Ivictory all winning at their first try, but this one managed to mug his rivals by five and a quarter lengths. The gelding turned heads as he drew clear ahead of another of the season’s well-regarded young guns, the 1.4 race-favourite Everyone’s Delight.

“In Hong Kong, if a three-year-old first starter wins by a margin, then normally they’re going to go all-the-way,” Size said.

Jockey Joao Moreira mustered the New Zealand-bred to the front from barrier three and from there he was never headed.

“When we were about to cross the line I just could not believe he was winning that easily – he’s one of a kind,” Moreira said.

The Sacred Falls youngster crossed the line first in a recent trial at Conghua and was a NZ$150,000 (approx. HK$775,516) purchase out of the 2019 Karaka National Yearling Sale in New Zealand.

“I was very impressed with his trial at Conghua a couple of weeks ago, so when John (Size) said he was going to run soon I was quite excited about it,” Moreira said.

“I couldn’t have foreseen him winning as he did. Of course, the handicapper is going to stop him eventually but it’s going to take him a while to get there because he won so impressively. It looks like as a young horse, he is immature but he has everything within himself to improve even more. I’m very impressed.”

The win was the first of a double for the Brazilian ace who also claimed the Class 3 Fife Handicap (1600m) aboard the Me Tsui-trained Great Treasure.

David Hayes snapped a two-month run of outs thanks to Moneymore’s sweeping victory in section two of the Class 5 Wylie Handicap (1400m) under Keith Yeung.

“It was a little bit frustrating but it’s nice to get the monkey off the back. Every time I got a bit flat I would walk through my stables and look at all my new horses – I have 50 of them,” Hayes said.

“I have to be patient as I know I have some very nice young horses coming.”

Hayes’ third win of the campaign came with Moneymore, who gave the handler his first success since he bagged a double at the season-opening fixture.

“I think going to Conghua provided a little change of environment that helped him. I think the addition of the winkers certainly helped him because he wobbled last start and Keith Yeung gave him a 12 out of 10 ride.

“Keith (Yeung) does a lot of work for me, so it’s great to see Keith win on him,” Hayes said.