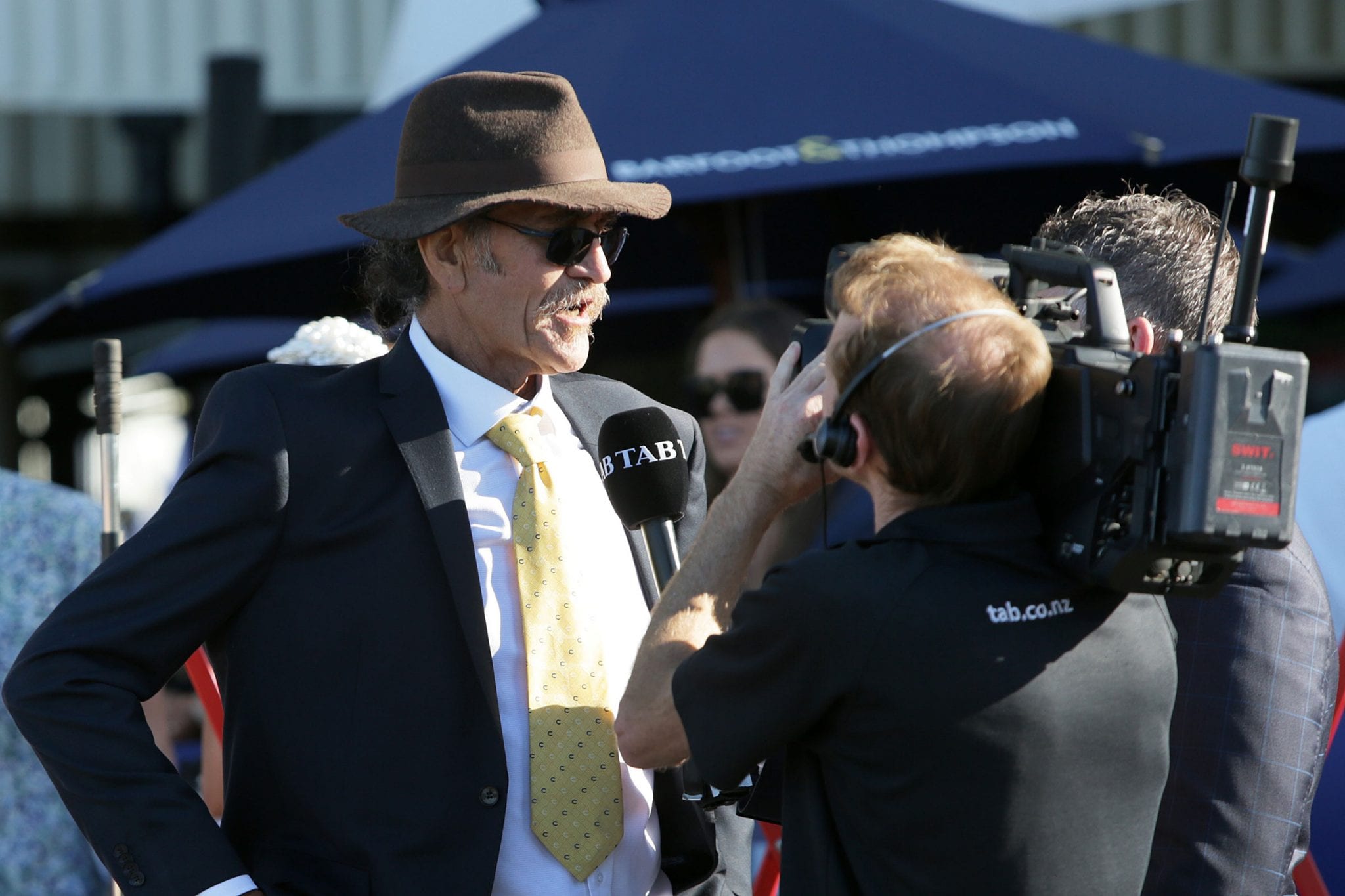 The last start Group 1 Auckland Cup (3200m) winner lines up as topweight in the Tauranga feature with conventional wisdom having the free-running stayer only just starting to warm up at the business end of the contest but Pomare is having none of it.

“He is a very versatile horse and that Auckland Cup run didn’t really take that much out of him,” Pomare said.

“He won his maiden over 1400m by five lengths and he has also won over the mile and been unlucky not to win another couple over the distance.

“We had planned on giving him a good break after his Cup win but after a week he was tearing around like a lunatic and I was frightened he might hurt himself.

“I brought him back in to give him a breeze-up, but he has absolutely thrived and put weight on, so he is ready to go a cheeky race.”

Ocean Billy will be reunited with his Auckland Cup partner in rider Johnathan Parkes who rang Pomare to offer his services wherever the horse went.

“Johnathan called after the Auckland Cup and said he would like to ride him, which I was really pleased to hear,” he said.

“He even told me he’d get down to 53.5kgs if he had to which I know is very tough for him, so I really appreciate that sort of commitment.

“He’s got 58 kgs tomorrow so that won’t be a concern this time.”

Pomare has had time to reflect on his achievement in winning the Auckland Cup and the possibilities it has opened up for Ocean Billy, including a trip to Brisbane in the winter and potentially a tilt at the famous Group 1 Melbourne Cup (3200m) in November.

While discussing those options with part-owner and good mate Peter Ludgate, Pomare received a phone call that he never dreamt he would ever get.

“I was around at Peter’s place and we were talking about the horse, like we do and the phone rang,” Pomare said.

“It was an Australian number that I didn’t recognise and when I answered it the voice on the other end said, ‘Hi it’s Chris Waller here’.

“I said a little sarcastically ‘sure it is’ but he said no it is Chris Waller and I just wanted to congratulate you on the win with Ocean Billy, he looks like a very promising stayer.

“I put him on to Peter and they had a good old yarn and when I spoke to him again he told me he was keen to help me if I was going to bring the horse to Aussie and to not be afraid to ask him for advice if I needed it.

“That just means the world to me, that someone like Chris would be prepared to give up his time to talk to someone like me and you can bet I will be asking him plenty.

“We would like to take Billy to Brisbane for a race like the Brisbane Cup (Group 2, 3200m) and try to get him qualified for the Melbourne Cup.

“That’s where the advice from Chris will be worth its weight in gold regarding what races to target and things like that.”

Speaking with Australia’s leading trainer and winning an Auckland Cup are, however, a far cry from the life that Pomare knew as a child with his early years punctuated by family violence, mistreatment and fear.

Along with twin brother Jim, Bill was whangaied (adopted) by relatives and sent to live with his uncle in Wanganui on his 33,000-acre sheep and beef farm.

Life was tough with both boys expected to take their share of the farm work on and were dealt out regular beatings for even the smallest indiscretions.

“If you think about the movie Once Were Warriors, that was a walk in the park compared to what we grew up with on the farm,” Pomare said.

“My uncle was a cruel, cruel man and he used to beat us at the drop of a hat.

“The minute I turned 15 I basically escaped and ran away. I started labouring in Patea and Wanganui, but I was living rough in my car and when that got taken away, I lived under a bridge for a while.

“I ended up in Hastings and together with a couple of mates, Irish born guys, we pretty much tore things up, creating a little bit of havoc but nothing like you see these days.

“We were in court one day, and the judge described us as a pack of Mongrels so we started calling ourselves the Mongrel Mob.

“That was the genesis of the gang, although the Mongrel Mob these days might dispute that, but that’s where it started.

“It was nothing like the gangs today though, we drank in the pubs and had a fair few fights outside them but there wasn’t the drugs or any of the other things they now do.

“It was just guys hanging together.

“There were a number of young maori youths that wanted to hang with us as they needed that same mateship and that was how it started to grow.

Pomare is not proud of some of his actions in those times, including a stint in borstal after being involved in a bottle store robbery, but renounced the lifestyle shortly afterwards.

“One day I had just had enough and walked away,” he said.

“I went out to get milk and bread from the dairy and never went back.

“I just knew I wanted something better for myself and I needed to make that break.”

Pomare went back to Wanganui and a job with the local power board where he started an apprenticeship as a technician and then moved on to a selling role. It was there his undeniable work ethic shone through and set him up for the next stage of his working life.

“I enjoyed what I did and I used to really put in the hours, even to the point when I was selling appliances to people, I would call on them after hours to make sure they were working properly,” he said.

“I was married to my first wife Gail then and money was tight, so I did what I had to do to make as much money as possible.”

The marriage didn’t last that long and Bill headed north, eventually stopping in Rotorua and establishing his own electrical business that is still going to this day.

“I thought I would have ended up back in Wanganui, but things really started well in Rotorua and I’ve never left,” he said. “I was working 18-hour days, seven days a week and the business just took off.

“I met and married my second wife Pauline but when I was 39, I went in for a check-up as I hadn’t been feeling too well and the doctor told me I had a massive tumour in my stomach that was cancerous.

“He told me I had six months or maybe a year to live, which was not something I wanted to hear.

“Luckily I’m a person who doesn’t dwell on the negative and I started focussing on what I could do to try and beat it.

“Pauline and I looked at natural remedies and we ended up going to Rarotonga as there was a clinic there that had good results treating people for cancer.

“I really wanted to find someone who had had stomach cancer and survived so we could pick their brains about it.

“One day I was admiring some paintings that were hanging on a wall and an American woman told me she was the artist. We got talking and I found out her husband was a natural healer and we ended up going to see him in the forest where they lived.

“He treated me with coconut milk and his remedies and within about three weeks I left there a tall, tanned dude which was a far cry from how I looked when I met him.”

After a few minor setbacks over a six-year period, Pomare received a clean bill of health and celebrated with his wife and family by taking a trip around the world but on their return received the devastating news that Pauline was now stricken by the insidious disease.

“I’m a pretty happy-go-lucky type of guy but Pauline used to worry and stress about things and I think it was the stress about my health that triggered her own cancer,” Pomare said.

“She was too far gone when she received the news and sadly passed away three years later.”

Pomare by then had undertaken his first foray into racehorse ownership with the purchase of a filly he and Pauline named Flying Beau.

“Before Pauline got sick, we decided to buy a horse as we both loved racing,” he said.

“Pauline had worked for Grant Searle when he was training and I used to like a punt, so we thought we’d try owning one ourselves.

“Flying Beau got us started and although she only won a single race, she became the matriarch of our breeding stock when she finished on the track.

“We bred and raced Flying Free from her, who won nine races and is the grand-dam of Ocean Billy.”

In 2008 Pomare married his third wife Suzi, a family friend who rode track work for him and is now not only the love of his life but an integral part of their boutique training operation.

“Suzi is just marvellous, an incredible horsewoman who really makes the place hum,” he said.

“We only have four in work but it’s still a big job.

“Suzi rides trackwork along with my sons’ partner, so between the three of us we get the job done.

“I guess with what we have ahead of us with Ocean Billy we are going to have to look at how we manage it all but it’s a challenge we’re both up for.”

Bill will turn 73 in September and has no plans to slow down, still mixing his training, racing and breeding operations with work in his Electrical business that is still going strong.

“I don’t do as many hours in the shop as a I used to, but I’ve got a couple of stoves to fix which is priority today,” he said.

“I love talking and helping out the customers and that keeps me young.

“I think they think I’m a bit of alright at the moment as I’ve had plenty tell me they backed Billy in the Auckland Cup.

“A couple of my mates who own pubs in town said they couldn’t pay out everyone who was on him that day, so I like to think the win was something special for people here and I get as big a kick from that as my own excitement on the day.”