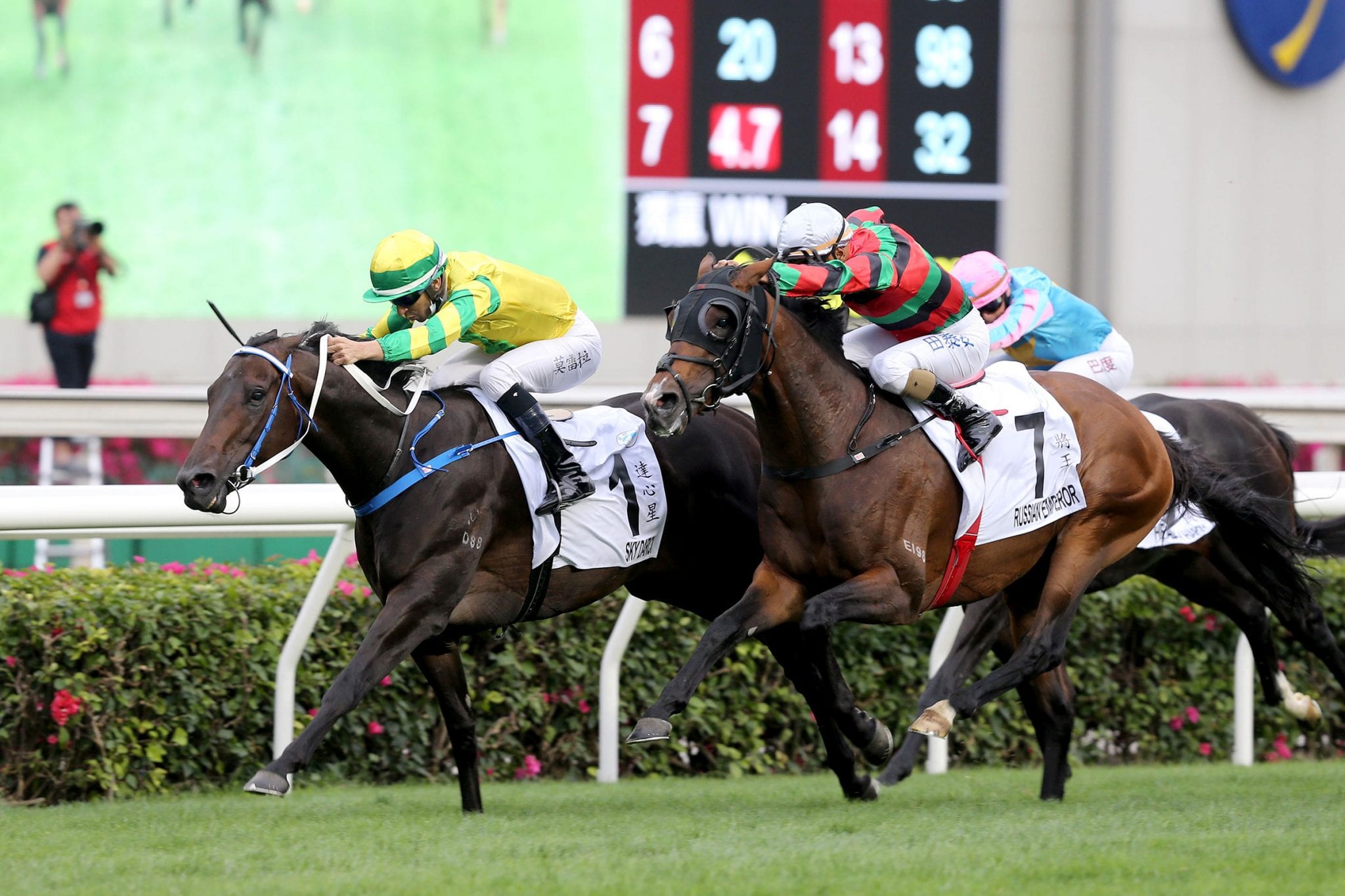 The Darci Brahma gelding was plucked from New Zealand as a PPG (Privately Purchased Griffin), joining the Fownes stable as a raw, unraced gelding in 2019. Less than two years later, he is part of Hong Kong racing folklore.

Eleven starts after debuting in Hong Kong on 9 November, 2019, the four-year-old emulated the feats of fellow unraced import Golden Sixty, now the highest-rated horse in the jurisdiction, by staving off stouter-bred stayers to lift Hong Kong’s most coveted Classic.

In the end, only a head separated Sky Darci and a charging Russian Emperor – the son of super-sire Galileo and champion Australian mare Atlantic Jewel – as Panfield, a triple Group 1 winner in Chile, closed menacingly.

“It was the longest (last) 200 metres I’ve ever seen in a race, that’s for sure,” Fownes said after securing his second Hong Kong Derby triumph, having savoured his first win in 2010 with Super Satin.

“It felt like an eternity there and I’m glad he stuck his neck out and got the winning result.

“All in all, it’s a magic day – massive satisfaction. This horse with the owners (the Kwan family), it’s magic, they’ve been incredible people to train for.

“They bought this horse and gave me the opportunity to train him – he’s come a long way in a short period of time – all credit goes to them. Also, I’m very happy with Joao (Moreira).

“You’re never too confident in these types of races. I said to Joao ‘I can’t get a horse any better than this. Obviously, the staying test is going to be a little bit of query for us but we’ve got the soft gate and he’s in perfect condition. So, good luck’.”

It was a masterstroke – and one which paves the way for the now six-time Hong Kong winner to return to more preferable distances.

“That was a big, tough win but he’s going to have to go to the next level now, which I’ll think he will take in time,” Fownes said.

On a day of milestones, Moreira celebrated his second Derby achievement after Rapper Dragon in 2017, while surging over the 100-win mark for the 2020/21 season.

The Brazilian gave an icy display on Sky Darci, sitting behind Shadow Hero as Healthy Happy and Silver Express set a solid clip in front.

“It was such a smooth run – he jumped out well and immediately I just grabbed hold of him and tried to put him to sleep,” Moreira said.

“Once those two horses (Healthy Happy and Silver Express) ran away in front, it was such a good section for us and at, the 800 metre mark when Russian Emperor was moved out and left the fence for me to start improving, it actually forced me to go a little bit too early.

“I had to angle my way out but once I got into the straight, I had taken the lead a little bit too early but I knew I was on the best horse in the race and I had a lot of confidence in the horse.

“I knew they (rival runners) were coming, they were good horses as well. He’s not a specialist 2000 metre horse, in my opinion, but he’s got heart and even if they were coming, he was giving his best.

“Going across the line, oh my goodness, it’s such a meaningful race for me, for Casper too and his family.

“This is the first Classic that I’ve had for him (Fownes). I haven’t had too many rides in the big races for him and he’s a tough trainer, he’s won the championship a number of times, he’s won the Derby before and this is such a great training achievement.

“He’s got this horse to a great level – if he didn’t do such a great job, I don’t think we would have won the race.”

“Of course, riding 100 winners is always special but riding exciting horses makes it even more special,” said Moreira, who clearly has a huge opinion of unbeaten Courier Wonder.

“I have been saying to connections he is such a special horse and I doubt that he is going to let us down because he is so professional.”

Fantastic Treasure bolted in with the Class 4 Super Satin Handicap (1200m) under Chad Schofield to preserve his unbeaten record for David Hayes, who predicted the Written Tycoon gelding has plenty of scope for improvement.

“He won like an upper-class horse, physically he looks like one,” Hayes said after the sprinter’s four-length victory.

“Next season, he’ll be even better at 1600 metres but this season we’ll keep him short because he’s young.”

The victory was Schofield’s first since overcoming a back injury and his second aboard Fantastic Treasure.

Alexis Badel and Chris So opened the blockbuster program in style with Bella Baby’s triumph in the Class 4 Fay Fay Handicap (1200m) before Matthew Poon and Benno Yung combined with Shanghai Dragon to clinch the Class 4 Helene Mascot Handicap (1600m).