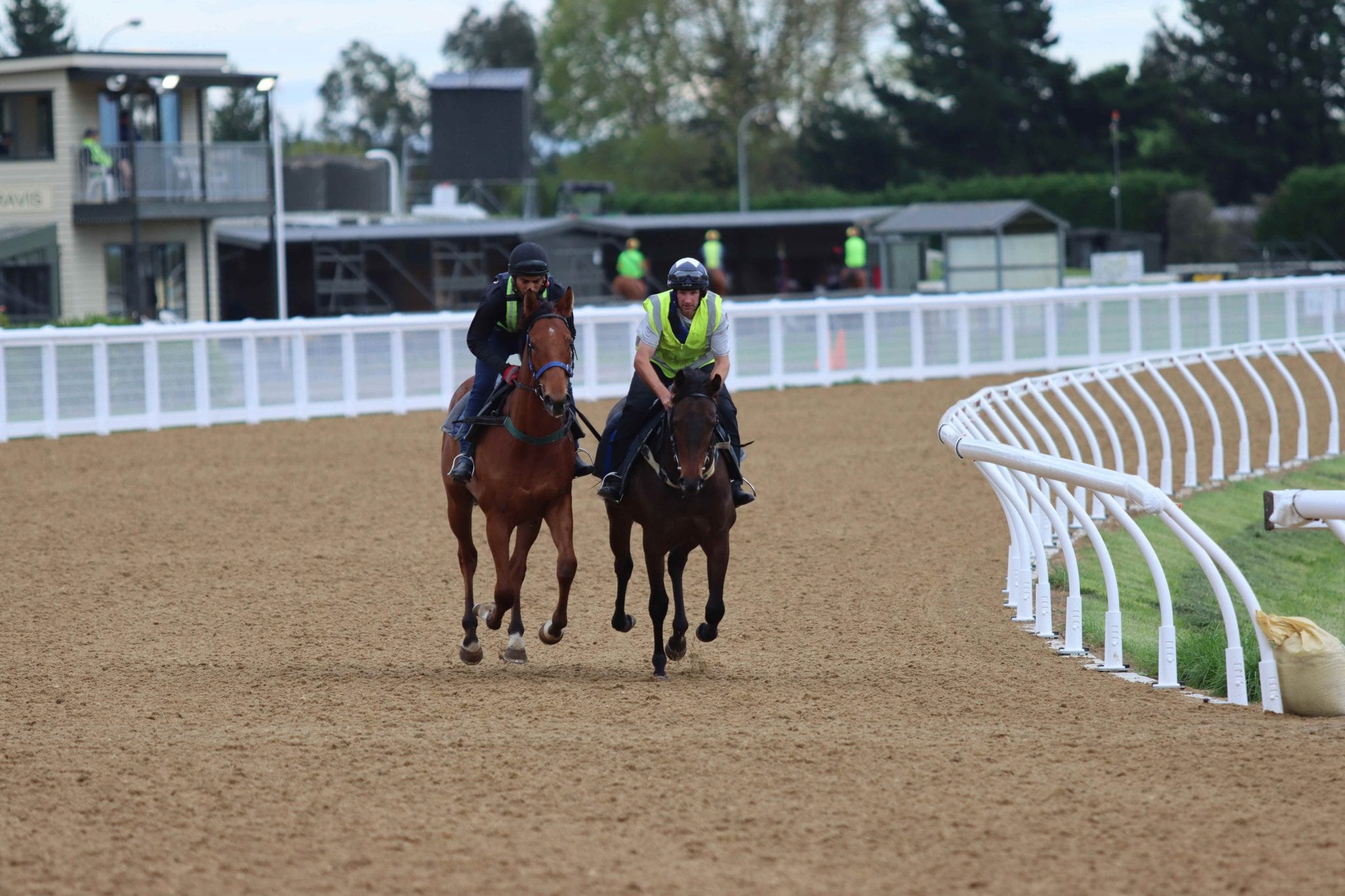 Horses stepped out onto New Zealand’s first synthetic surface last week with construction of the Polytrack completed at the Cambridge Jockey Club. Construction began in January this year and nearly 10 months on, Cambridge Jockey Club chief executive Mark Fraser-Campin is more than happy with the result and enthusiastic about the benefits it will bring to New Zealand racing.

“It opened last Thursday afternoon and we had six or seven horses go around with senior riders,” Fraser-Campin said. “We opened it for slow work on Friday morning and all the reports have been positive.”

The Cambridge track is one of the largest training facilities in Australasia, with 1100 horses being worked each morning. “Jockeys have said within half a lap the horses feel that evenness and the niceness of the camber and get their confidence on it,” Fraser-Campin said. “You get the older horses who are feeling like young two-year-olds and hearing about horses that used to pull a bit are relaxing in their work because they feel so good.”

The first jumpouts at the Cambridge track are scheduled for Thursday morning with trials pencilled in for November 24. “We have a quiet set of jumpouts on Thursday morning,” Fraser-Campin said. “We will have five heats for the horses to get the feel of it. “We will add jumpouts more regularly, every Friday, and we have the ability to work four or five hundred on it each morning then have jumpouts, then trial the next day and it will be 100 percent the next morning.”

Horses trained in the wider Waikato region are also likely to make regular use of the state of the art track and Fraser-Campin is keen to encourage broader use. “I’ve been approached a couple of times and had some phone calls last week about horses from other training centres coming in to use the track,” he said.

“Obviously we want horses to work here, we have got the track to use it and we encourage people to come here and use it. “We have races here next year commencing on May 19, and we want horses to have the ability to be able to come and work on it before those races or trial on it.”

Though the initial $12.75 million investment was substantial, a figure which includes provisions for lights, camera towers and amenities that transform the facility to a racing centre, Fraser-Campin said once established, the track was relatively easy to care for.

“With the day-to-day maintenance we do the clear camber, check the temperature and discuss these with Reid Sanders from Martin Collins (manufactures of the Polytrack),” he said. “Our staff have been trained on how to maintain it and effectively it is the easiest track to look after because it is pretty straight forward and there is no guess work, we just follow the protocols under the warranty.

“Long-term, we will have to rewax it in three years and there is a cost to that. People have to understand you could come here any day of the week where we are putting $20,000 worth of sand on the track and we have got guys watering the track. “The Poly has no need to water, it takes all the winter rain whereas all the other tracks are a lot more affected by the elements and take a lot more maintenance and upkeep. “Yes, it is expensive to set up in the first place, but the animal welfare benefits and sustainability for the industry are fantastic.”

Local trainer Tony Pike, who is also President of the Trainers’ Association, was complimentary of the new track and believes it will be of great benefit to New Zealand racing, especially in the winter months when many of the country’s tracks notoriously succumb to the wet weather. “We are one of the last countries to accept a synthetic track,” he said.

“They are renowned worldwide. Look at Europe where a mare like Enable, who is the best mare in the world, raced on polytrack as her lead-up to the Arc (Group 1 Prix de l’Arc de Triomphe, 2400m). “I think it is the way forward for the future, we will have a consistent training surface, trial surface and potentially a racing surface 12 months of the year, no matter the weather conditions. “It is going to be fantastic. We have been working horses for a week and started galloping horses a couple of days ago. They move well and are very settled and the feedback from the riders has been fantastic. I’m sure once we get a few wet months, like New Zealand does, it will be very well accepted.”

Pike said the track was a step in the right direction towards cost-saving efficiencies for owners. “The costs for owners are a huge part of the industry that we need to tidy up,” he said. “If we can start centralising racing so the travel costs to owners for trials and race meetings are reduced it will be huge savings for the industry as a whole.”

With New Zealand known for its thoroughbred exports, Pike believes the consistent track surface will also mean prospective international buyers will be able to speculate with confidence. “This track will be mainly used for trials during the winter months and if you talk to anyone in the Asian market, they all have synthetic racetracks and I’m sure they would prefer to buy a horse off a consistent Polytrack surface in the middle of winter than a heavy turf venue. “If you have an impressive trial winner on the polytrack in the middle of winter, I am sure you will find a market for it very easily.“

Runner-up in last season’s premiership, trainer Stephen Marsh has given the track a tick of approval. “It’s beautiful. The horses are loving it,” he said. “We haven’t galloped on it yet, we are just getting them used to it. “It is just going to be so good. Getting your horses ready for early spring, at the moment, you get a massive amount of rain and the grasses are heavy and the sands are a bit awash. Now it is not going to matter. You can have a perfect surface irrespective of if you get a lot of rain or if it’s sunny and it is just going to be a lot more consistent and a lot easier to train.”

Marsh, who has had experience training horses on the synthetic track at Randwick, as well as seeing his father Bruce train predominantly on the Polytrack surface in Singapore, said horses readily adapted to turf tracks on raceday. “Dad said it’s great. He had a lot of horses go first-up after a couple of trials on the polytrack never seeing the grass, they’d race first-up on the grass and it never worried them,” Marsh said.

“It is a great tool. “You imagine in the middle of summer, we are not going to have a hard track and jarring up will be less. “I think we will probably look back and say remember the days when we used to have to go to Te Teko and beyond for 30 trials. “Now we will have trials every week once we’re up and running and it will cut those days down and it won’t be such marathons. “The thing I really like is they don’t go into it far. The footing seems to be good and it is just a consistent surface.”

The surface may also prove the answer to the early starts that are so often a deterrent to prospective staff in the industry, with trainers jostling for pole position to make use of the better surfaces in the early hours. “When you’re galloping on sand tracks you want to get on them very early, because they deteriorate after a hundred horses go around on them,” Marsh said. “This track is perfect at 4:30 in the morning and is still perfect at the end of the morning. It is pretty low fuss.”