Bright future for son of Raise The Flag 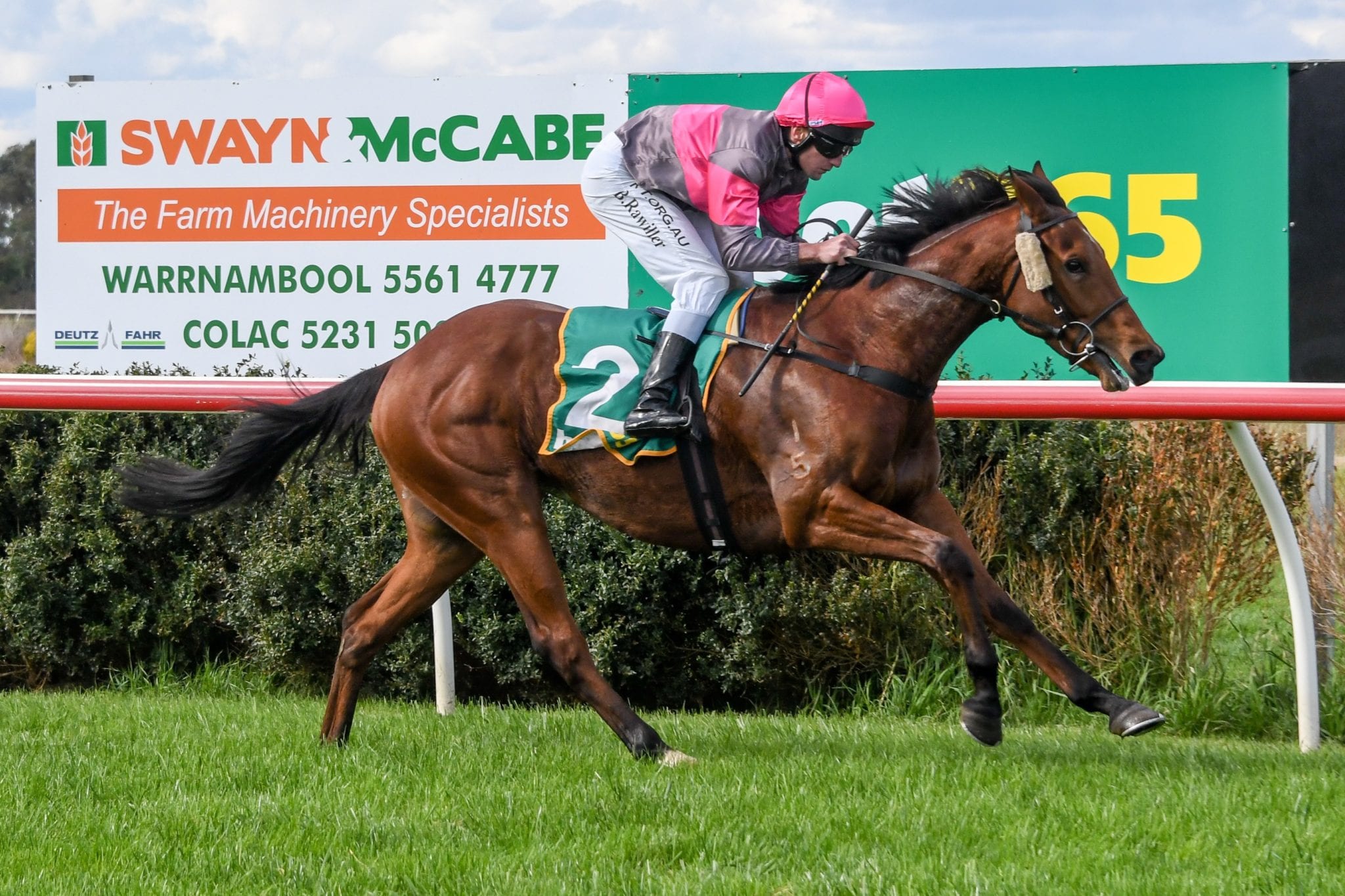 It might have been a lowly 1400m maiden at Terang on Sunday, but the 5-1/2 length demolition by lightly-tried galloper Paddy Mac provides cause for optimism for the connections of the recent Kiwi import.

A four-year-old son of Raise The Flag, Paddy Mac was well supported in his first run for Warrnambool trainer Symon Wilde and never gave backers a moment’s concern when saluting in a manner befitting a $1.75 favourite.

Bred by Michael and Nikki White under their Tiger Hill Farm banner, Nikki prepared Paddy Mac in partnership with Lee Callaway to win a trial and place on debut at the Cromwell meeting in December. The partnership is unique, with White based at Omakau while Callaway is located at Riccarton. The patiently handled galloper caught the eye of bloodstock agent Dave Mee and looks set to be a handy addition to the Wilde stable.

A former southerner himself, Mee is based across the Tasman and operates under Pinhook Bloodstock. “I grew up around Omakau,” Mee said. “My parents and Michael’s parents are pretty good friends. “I was over for (New Zealand) Cup week and I went to Riccarton in the morning and ran into Michael and asked if he had anything he was looking to sell.

“He was holding Paddy Mac and I had a look at him and liked him. I looked at the form and was keen. “I do quite a bit with Symon Wilde and over the years he has had quite a few good horses out of New Zealand. “We came to terms on the price and you saw the result on the weekend. “It was nice. I have known Michael since I was a kid so it is a link that spans decades.”

White Robe Lodge stallion Raise The Flag has made a name for himself as a trusty source of stayers and jumpers and is the sire of recent Group 1 Sydney Cup (3200m) winner Etah James.

However, connections of Paddy Mac believe the four-year-old is even more versatile than most. “Symon and Brad Rawiller (jockey) think this horse has a bit of brilliance and said they wouldn’t be stepping him up in trip just for the sake of it,” Mee said. “Brad said he gave him a really good feel and is promising.”

With Covid-19 putting the brakes on New Zealand racing until the beginning of July, Mee said there could be further opportunity to source stock from his native land. “I have just brokered a deal on a mare out of the Central Districts and I have a few staying prospects that we are trying to get across the line,” he said. “In Australia, there are a lot of people with cash that can ride this thing out. While there are definitely more horses on the market, people who are in a position to go shopping are looking for value.”

Mee is a fan of the stock of Raise The Flag, sire of Jericho winner and jumping sensation Ablaze as well as a host of stakes winners including recently retired Sandown Cup (Listed, 3200m) winner Yogi. An impeccably bred son of Sadler’s Wells, Raise The Flag is also the sire of promising hurdler Riding High, who won at Pakenham on Sunday for Henry Dwyer, and progeny of the now 15- year-old stallion are keenly sought after across the Tasman.

“Raise The Flag does have a cult following in Australia, justified by results,” Mee said. “I have a client with a mare in the North Island and he is going to ship her down to Mosgiel to mate her to Raise The Flag.

“I was a bit lucky with Paddy Mac. I was just in the right place at the right time. He was a four-year-old and all the hard work had been done. It was a decent price, it wasn’t overs and wasn’t offensive. It was a fair price. “If he wasn’t by Raise The Flag the new connections wouldn’t have even looked at him, but Symon Wilde wanted a Raise The Flag and Paddy Mac certainly looks a progressive horse.”