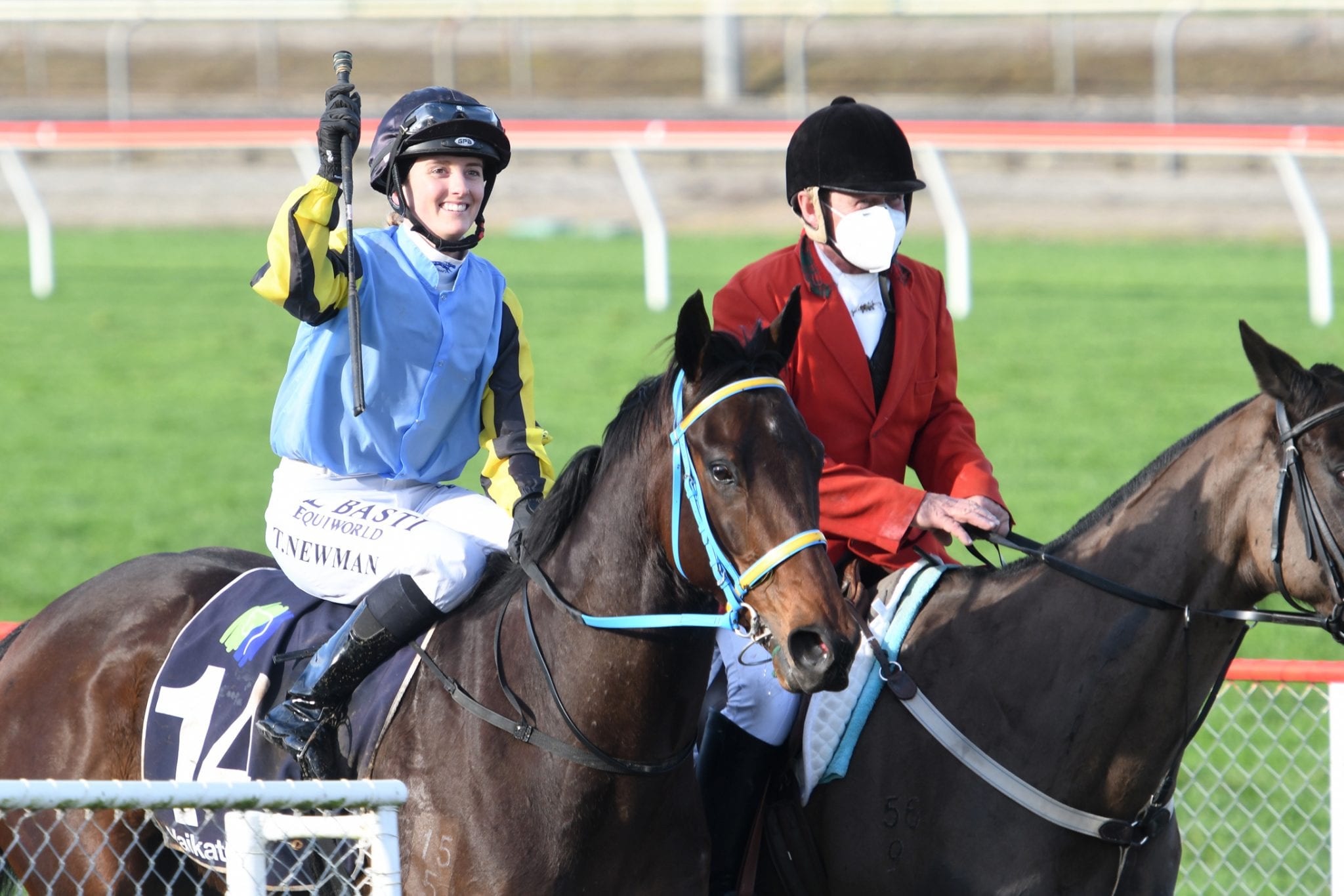 The joy of achieving a winning double at Matamata on Saturday was tempered slightly for apprentice Tegan Newman when she copped a week’s suspension for a whip infraction at the Te Aroha meeting on Sunday. Newman had been cock-a-hoop after piloting the Daniel Miller-trained React and the Stephen Ralph-trained New York Jazz to victory at Matamata but was quickly brought back to earth a day later with the ill-timed suspension coming after making her best start to a racing season with four winners in the first month.

“I finally got it (winning double) as I’ve been so close before and finished second too many times trying to get a double,” she said. “They were both really nice winners and at good odds as well. “Unfortunately, I picked up a suspension for my whip use on Sunday which wasn’t a great way to finish off. I got a fine on Saturday and then got the suspension for another infringement on Sunday so I won’t be back riding until Te Rapa on September 5th. “I’ve had a really good start to the year and have been getting more rides so I’m hoping to keep that momentum going when I get back.”

Born and bred in Kerikeri, Newman’s love for horses began when she convinced her parents to get her a pony at a young age. Newman became a more than accomplished show jump rider, winning the Pony of the Year show jumping title at the Horse of the Year show in 2012. As her time in the pony ring came to an end Newman had developed a desire to become a jockey and found her way to an apprenticeship with former top jockey Jim Collett at Matamata.

She had her first race ride in the 2016/17 season for Collett and her first win in February 2017 when successful aboard Massofdash on Matamata Breeders’ Stakes Day. Newman then moved to the tutelage of Stephen Autridge during his time at Te Akau Racing and followed him when he took over the reins of the Valachi Downs racing team. A further change occurred in November last year when she transferred her apprenticeship to her former partner Daniel Miller as she recuperated from a serious trackwork injury that had her off the scene for four months due to back and chest injuries.

“I started off with JC (Collett) and then moved to Stephen at Te Akau,” Newman said. “When Stephen then went to Valachi Downs, I went there and now I have signed on with Daniel. That was in November last year when I was trying to get back to riding after my injuries. “I was off for four months from August last year with my lower back and chest injury after a fall at trackwork. “It is still causing me grief now as I still have to have physiotherapy every week. The Doctors have said that my back will always need some sort of treatment but they are still trying to work out the issue with my chest as I have had two cortisone injections and an MRI scan and they still haven’t pin- pointed exactly what is wrong.

“I did put on a fair bit of weight when I was injured but I’m nearly back to where I want it to be and it is quite good and stable at the moment. “I’ve been really pleased with how things have been going since my injury as I’m in a much better head space, with a clearer mind and I’m determined to really improve my riding. “I think with the injury and the COVID-19 interruption my apprenticeship will be extended until around this time next year so I’m keen to make the most of the opportunities that come along if I can stay injury free.”

Newman is beginning to see the rewards of that determination as she is getting more outside rides, particularly with the Stephen Ralph team, while encouragement from her friends such as fellow apprentice Jasmine Fawcett has also spurred her along. “I had ridden for Stephen a few times before the first COVID-19 lockdown and since then he has been using me a lot more and having faith in me which is great,” she said.

“I’m feeling confident in myself and I have Jasmine egging me along. “She has been a huge help to me and tells me how it is straight up. “One of my goals at present is to outride my three-kilogram claim as soon as possible. I think I have about seven more wins to do that so I’d like to achieve that pretty quickly. “I’m really keen to continue riding once my apprenticeship has finished so the more I can do now the better it will be for me then.”