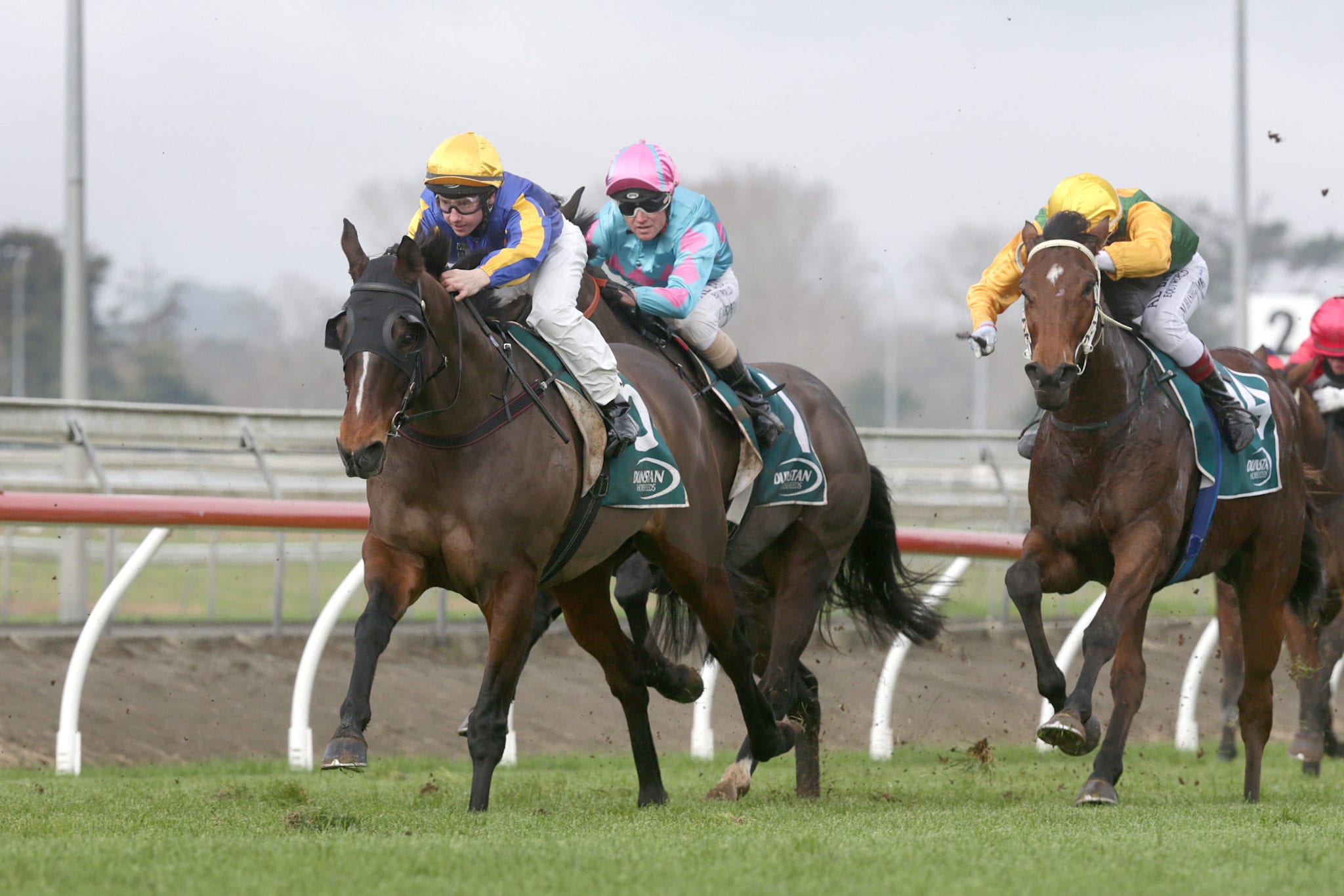 It may have been a mid-winter’s day at Pukekohe Park on Saturday, but it will live long in the memory of apprentice jockey Callum Jones. The 17-year-old hoop got the sign-off earlier in the week to begin his raceday career, and employer Nigel Tiley wasted no time in utilising the talents of the young rider and his four kilogram claim.

Tiley gave Jones five rides on Saturday and he rewarded his riding master’s faith with two victories and a runner-up performance. While Jones was over the moon to have his dreams of becoming a jockey come true on Saturday, he said he didn’t have a lot of expectations heading into the day. “I got the last three trials done last week and got it (apprenticeship) all signed off,” Jones said. “I couldn’t ask for a lot, I was just hoping to keep my horse straight, stay safe, and not push anyone out. “But I couldn’t have asked for a better day to start, it was just a thrill.”

Jones recorded his first riding win aboard Diogenes in the Dunstan Equine-Safe (1300m) and he said the win was made even more special by the fact it was with the four-year-old gelding. “Diogenes, he is one of my favourite horses at the stables,” Jones said. “From his other runs I was just hoping to cruise around and see how he handled the ground and save a bit for the end. “I am really stoked to get my first win on Diogenes. People have been getting a bit annoyed with him because he is a bit nippy, but some of them will be quiet now because he has won a race.”

Two races later Jones completed a double when getting $9.30 chance Double Happy up to win the Dunstan Sustainable Grain Kegs (1300m), which came as a bit of a surprise to Jones. “Double Happy normally goes better over a longer distance, around 2100m,” he said. “But I thought he would have a little bit left when the others got tired and he just went a bit better than I expected.”

Jones’ feat on Saturday was made more remarkable given that he has no racing background and hadn’t put a leg over a horse until three years ago. “I went to the races with a friend’s Dad one time,” Jones said. “He mentioned I was a good size to be a jockey and I would like it given my need for speed. “I went to Nigel’s about three years ago. I told him I wanted to be a jockey and he said come in and do some work experience on the weekends, because I had school. “In Year 10 I dropped out of school and went to work for Nigel. He taught me how to ride and the rest is history.”

Jones said he was immediately hooked from the time he first sat on a horse, but it hasn’t been an easy process to learn to ride. “It put a big smile on my face when I first started riding. I hadn’t experienced anything like that before. “I decided I would give it my best go and I am pleased that I have. “It is not something you pick up overnight, but everyone has been good. There’s a learning curve and things happen.”

Jones said it has been a great asset to have Tiley, a former champion jockey, teach him the ropes and guide him through his riding career. “I have got a lot of respect for Nigel. It is a big help with him having the experience that he has. “I wouldn’t be here if it wasn’t for Nigel. He has just got a good way of putting things to help me, especially not coming from a horse background.”

A keen surfer, Jones said his favourite past time complements his riding career. “As long as the weather is good and I have got a spare hour, at least, I am out there,” he said. “It helps with my balance and with arm strength, paddling out. “I used to live up in Piha, so it was good fun up there. It is my favourite beach.”

Jones said he would like to make a real go of becoming a jockey and has set himself a few goals early in his career. “I want to outride my claim in my first two years of my apprenticeship, that’s my main goal, and to just ride as many winners as possible, both for Nigel and other trainers.”