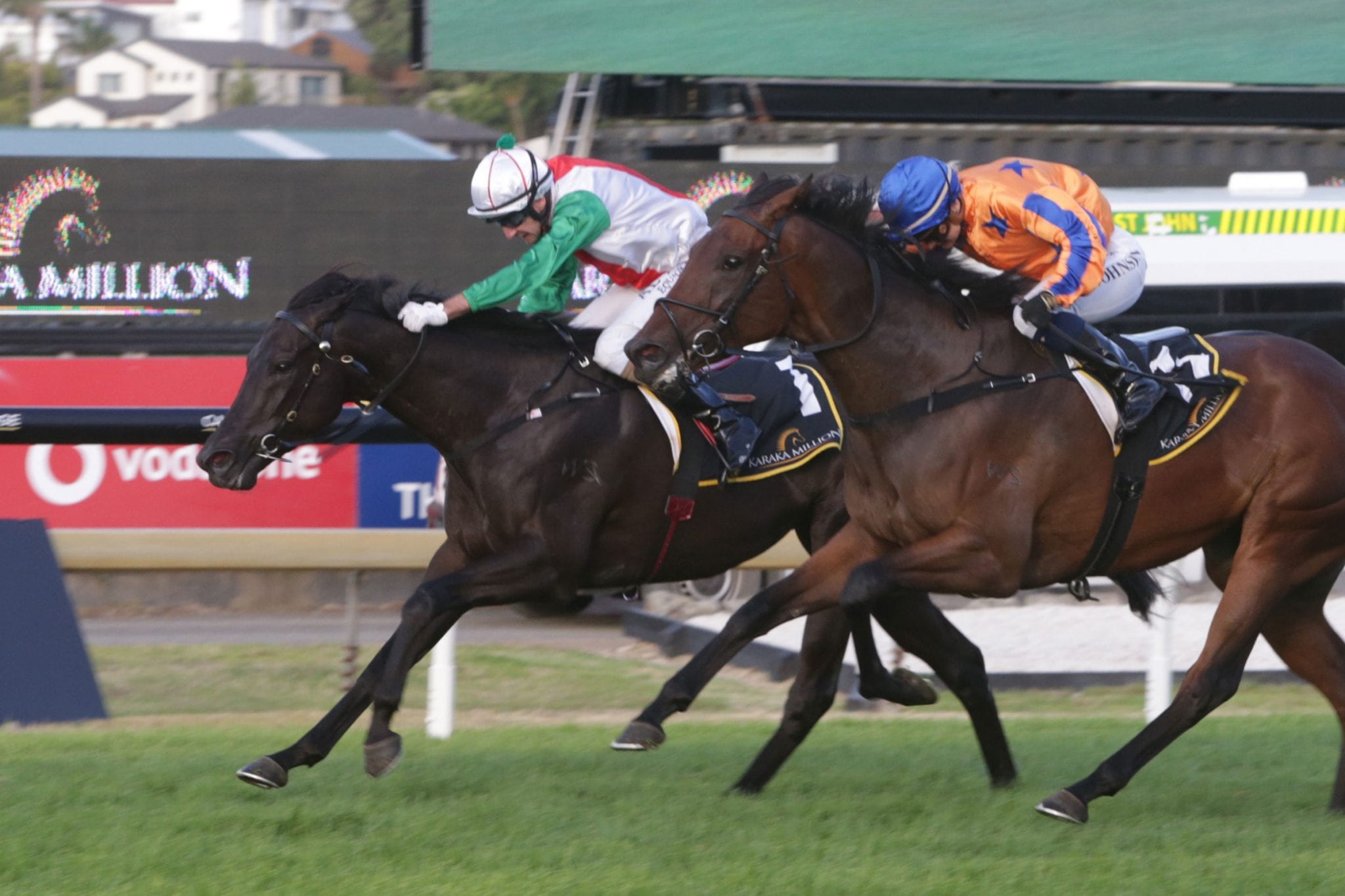 In a titanic tussle that lived up to the pre-race hype, Aegon kept his perfect record intact with a thrilling win over Amarelinha in Saturday’s Karaka Million 3YO Classic (1600m) at Ellerslie. Although the million-dollar race attracted a full field of 17 three-year-olds, the build-up was completely dominated by two horses.

One was Aegon, whose three-from-three record included the Group 1 New Zealand 2000 Guineas (1600m) at Riccarton and Group 2 Hawke’s Bay Guineas (1400m) at Hastings. The other was Amarelinha, a stunning last-start winner of the Group 2 Eight Carat Classic (1600m) over the same course and distance as the Karaka Million 3YO Classic.

Amarelinha started as the $2.10 favourite and was widely expected to continue the relentless winning roll of trainer Jamie Richards, jockey Danielle Johnson and the Te Akau Racing team. But Aegon, the only other runner in single figures at $2.60, crashed the party.

The top-class pair eyeballed each other in midfield for much of the race, then brought the crowd to their feet as they strode to the lead side by side halfway up the home straight. Amarelinha appeared to be gaining the upper hand, but Aegon lifted again and prevailed, snatching victory by a head in one of the season’s standout races.

It was a remarkable training achievement by the Cambridge partnership of Murray Baker and Andrew Forsman, with Aegon not having raced since the 2000 Guineas on November 7. The son of Sacred Falls had an exhibition gallop at Ellerslie on New Year’s Day and won a trial at Matamata on January 12.

“It’s a big thrill,” Baker said. “We’ve been very patient with this horse, and the staff at home have done a great job with him. It’s also a big achievement for my training partner Andrew, who selected him at the yearling sales. “He’d never been tried right-handed before, but he was given a great ride from Leith Innes today and he’s delivered on a big stage.”

There was a more muted response from Forsman, who also bought Aegon for $150,000 as a yearling at Karaka and shares ownership with the Zame Partnership. “It’s a bit of a relief, and I’m glad it’s over,” he said.

“He’s a very good horse, and horses like him make trainers look good. It’s special to be racing a horse like this with such great people. It’s a dream. “Leith is a big-race rider and did a brilliant job today, and it’s a great result. I’m very happy for the staff at home. We’ve had a bit of a lean time recently, we haven’t had the strength of team that we had a few seasons ago, so this is a real boost for them.”

Innes has ridden over 300 winners at Ellerslie in a high-class career in the saddle, but this was his first win in a Karaka Million race. “It’s a great event, and there’s nothing better than winning one of the million-dollar races on a horse like this,” he said.

“He’s very special. “The turn of foot he showed in the straight was incredible, and when the filly came up beside him, he really fought in those last 50 metres.” Aegon became the first horse to complete the New Zealand 2000 Guineas-Karaka Million 3YO Classic double.

The race was marred by Waimoku Falls dislodging rider Ashvin Goindasamy in the back straight. The Sacred Falls filly continued riderless and took Tannahill to the extreme outside rounding the home turn.

The former Waikato Stud stallion Sacred Falls, who tragically passed away in December 2019, will be represented by 13 individuals at the NZB National Yearling Sale at Karaka which starts on Sunday January 24.