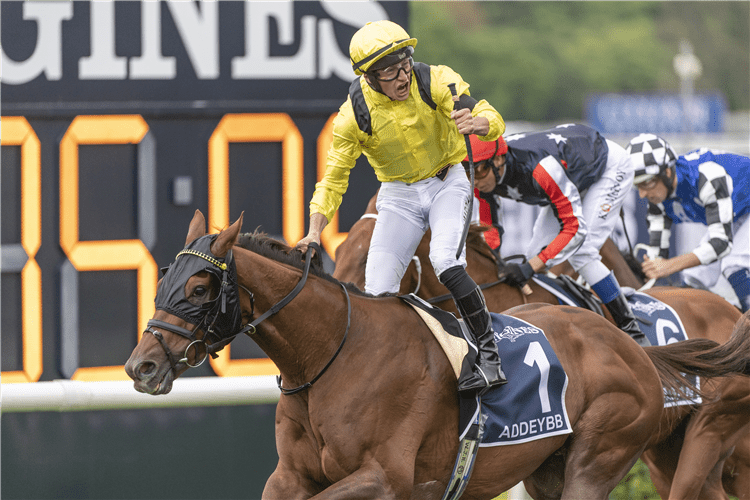 It was billed as the race of The Championships and the Queen Elizabeth Stakes lived up to the hype with Addeybb out-toughing Verry Elleegant to capture the $4 million showstopper.

The English raider was clearly superior last autumn to win the Ranvet Stakes – Queen Elizabeth double but when Verry Elleegant turned the tables in the first leg last month, the jury was out on whether Addeybb could fight back.

A firmer Randwick track also had the William Haggas camp worried but the gelding allayed their fears with a typically gritty performance to defeat his arch rival by a half-length.

Tom Marquand, who captured the hearts of the Australian racing public 12 months ago, was feeling the love for Addeybb and what the horse has done for his burgeoning career.

“He is the epitome of English racehorses, he dogs it out, toughs it out and today he was just exceptional,” Marquand said.

“I can’t even begin to imagine what I’d have thought five years ago if you’d said I’d have a horse like him pushing my career forwards.

“He’s done it down here, he’s done it back at home and honestly, I’m the most privileged person in the world to be sat on him.”

Haggas watched the race from the UK and credited Marquand for suggesting the addition of blinkers.

“He has put in a lot of work with this horse,” Haggas said.

“It was his call to put blinkers on.

“It was fantastic to watch.”

In a tactical affair, Addeybb was tardy to jump and settled midfield before Marquand moved up to sit at the flanks of leader Dalasan approaching the 800m.

James Mcdonald made his move on Verry Elleegant before the corner, sliding up to join Addeybb and it was race on but the mare could not match the English horse’s fight.

“She went amazing. She was pulling a bit hard early, and was jostled a bit which got her upset,” he said.

Dalasan ran the race of his life to finish third, another short neck away.