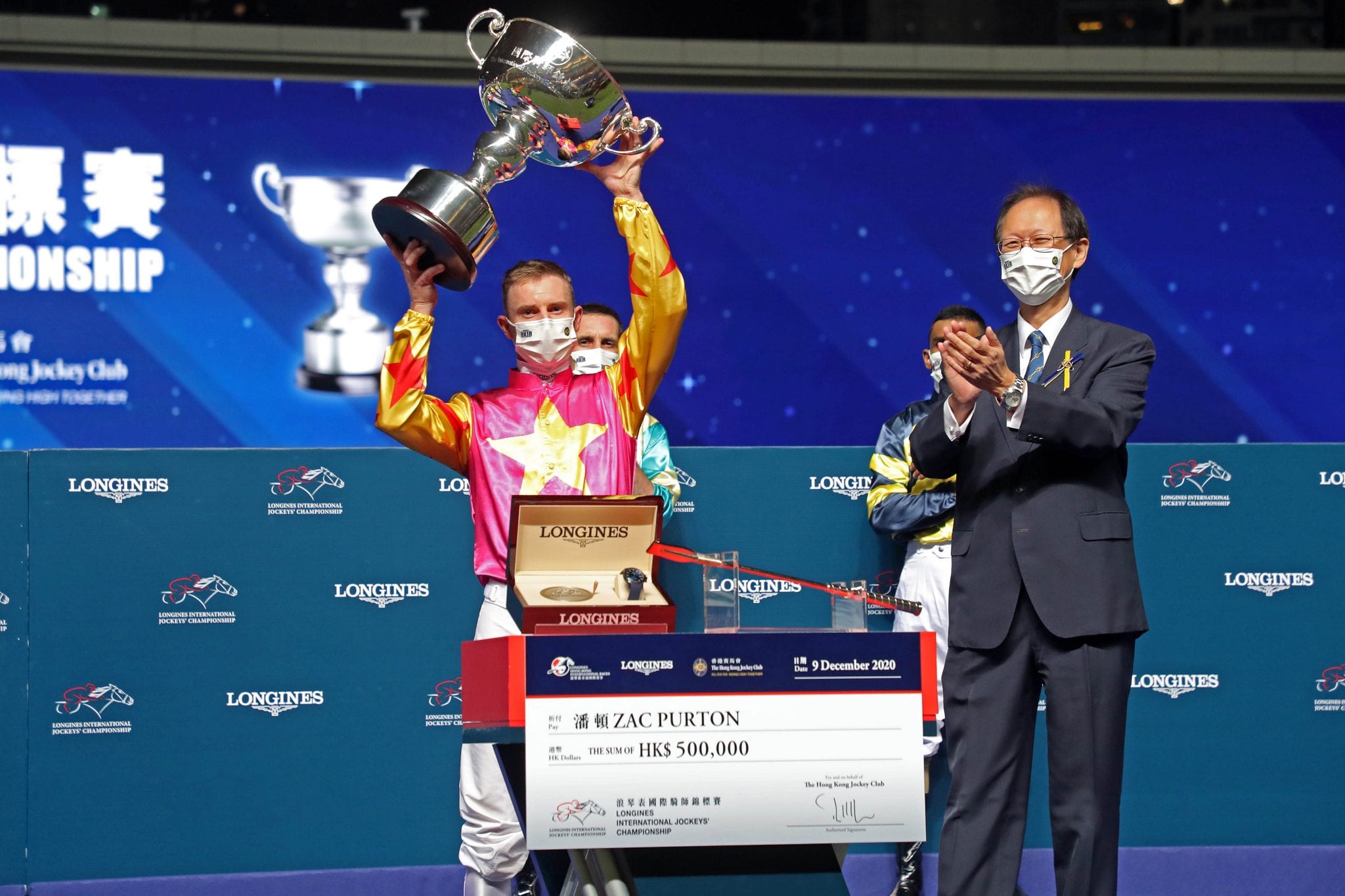 Zac Purton has claimed ultimate honours in the HK$800,000 LONGINES International Jockeys’ Championship last night (Wednesday, 9 December) at Happy Valley after clinching a tense contest from Joao Moreira in a dramatic finale to the four-race series.

Tied with Moreira on 18 points heading into the deciding race of the contest, Purton collected an invaluable two after dead-heating for third aboard Flying Bonus with Wind N Grass (Tom Marquand).

Moreira, who needed to finish ahead of Purton in the championship-deciding contest to add another accolade to his bulging collection, crossed the line in sixth place on Cue The Music, failing to improve his score.

On a landmark evening when Hollie Doyle became the first woman in history to win a leg of the of International Jockeys’ Championship on David Hayes’ Harmony N Blessed, Purton totalled 20 points under the 12-6-4 point format to deny Moreira (18).

Doyle and Alexis Badel were tied for third with 12 points each after Badel’s victory on Gallant Crown.

Hong Kong’s reigning champion jockey, Purton posted a treble at the meeting while also earning HK$500,000 – the richest prize in racing for competition of this type – as LONGINES IJC champion.

Tony Millard pocketed the HK$200,000 bonus as the most successful trainer of the series after notching a double with Gallant Crown and Gift Of Lifeline in the third leg, who was ridden by Purton in the pair’s first successful collaboration since 2015.

Now a two-time champion after success in 2017, Purton was elated with the timely success ahead of the prestige LONGINES Hong Kong International Races at Sha Tin on Sunday 13 December.

“In a competition like this when there’s so much on the line, it certainly feels nice to have won it again, it’s another moment that I’ll cherish,” he said.

“I didn’t start off too well but we built into it after that. Like I’ve been saying for quite some time now, barriers win races and unfortunately for me it seems have been going on for months.

“I’ve been drawing such bad barriers, every meeting, it’s making so difficult to be competitive.

“Then I come here tonight and, as I said, they weren’t the best rides in the race but the barriers gave them the chance to be competitive. I just needed a bit of luck and things went my way.”

Moreira set the early tone with a measured ride on Gouten Of Garo in the opening race of the contest, logging maximum points in the Class 4 1000 metres contest for trainer David Ferraris.

“This horse actually surprised all of us,” Moreira said. “On paper, he didn’t look like he was much of a chance.

“But David has done his job very well and he sent his horse out in great shape and he just delivered what he has got.

“Up in class, we were not that confident. But I am pleased to be wrong.”

Badel was chuffed to land the second leg for Millard with Gallant Crown, who staved off Fearless Fire (Purton) and Maldives (Pierre-Charles Boudot).

“I’m glad to win for him (Millard), he’s been a great supporter so far this season and I’m glad he had such an important win tonight,” said the Frenchman, who is relishing his third stint based in Hong Kong.

Purton thrust his way into contention with a clinical display on Gift Of Lifeline in the third leg over 1650m, prevailing in his first ride for Millard since June, 2017.

Moreira claimed a vital six points by finishing second on Smiling City for a share of the lead ahead of the finale as defending champion Karis Teetan earned four points with third placing on Helene Wisdom Star.

Doyle, only the third woman to contest the International Jockeys’ Championship after Emma-Jayne Wilson (2007) and Chantal Sutherland (2009), delivered strongly supported Harmony N Blessed – but much of the focus was on the action behind her as Purton and Moreira duelled to the line.

“It’s amazing,” Doyle said. “It’s just great to be here and it’s the icing on the cake.

“He’s a very, big strong horse. I think he’s got a good future ahead of him.”

The 12 jockeys involved in the contest – six from Hong Kong and six from Great Britain and Europe – all praised the Hong Kong Jockey Club’s balanced ride allocation.

“There have been a lot of good story lines out of tonight and I think the new system gave a lot of jockeys in the room a bit of confidence,” Purton said.

“I could feel the enthusiasm in the room and everyone was keen to go out there and give themselves a chance.

“Hollie winning a race was another highlight and Tony winning the trainers’ bonus and me being able to seal it for him. Hopefully we broke ice there and we can put our long run of outs behind us and just get on with business.”

On a glorious evening for Purton, he posted his 1200th win in Hong Kong after saluting on Run The Table in the Class 5 Australia Handicap (1650m) and Speedy Optimist in the Class 5 Brazil Handicap (1200m), although he had to share honours in the latter after a dead-heat with Frenchman Alexis Badel aboard Great Harvest.

Purton is only the second jockey to reach the 1200-win milestone in Hong Kong. Record-holder Douglas Whyte (1813) is the other.

A four-time winner of the Hong Kong jockeys’ championship, Purton rode his first winner in the jurisdiction in 2007.

Undeterred, the Brazilian quickly restored the margin with a race-to-race double of his own with victory on Incanto Prepared in the Class 4 France Handicap (1650m), followed by Gouten Of Garo.

Derek Leung posted a double, scoring atop Wood On Fire in the Class 4 Mauritius Handicap (1200m) and Glorious Artist in the finale, the Class 2 United Kingdom Handicap (1800m).