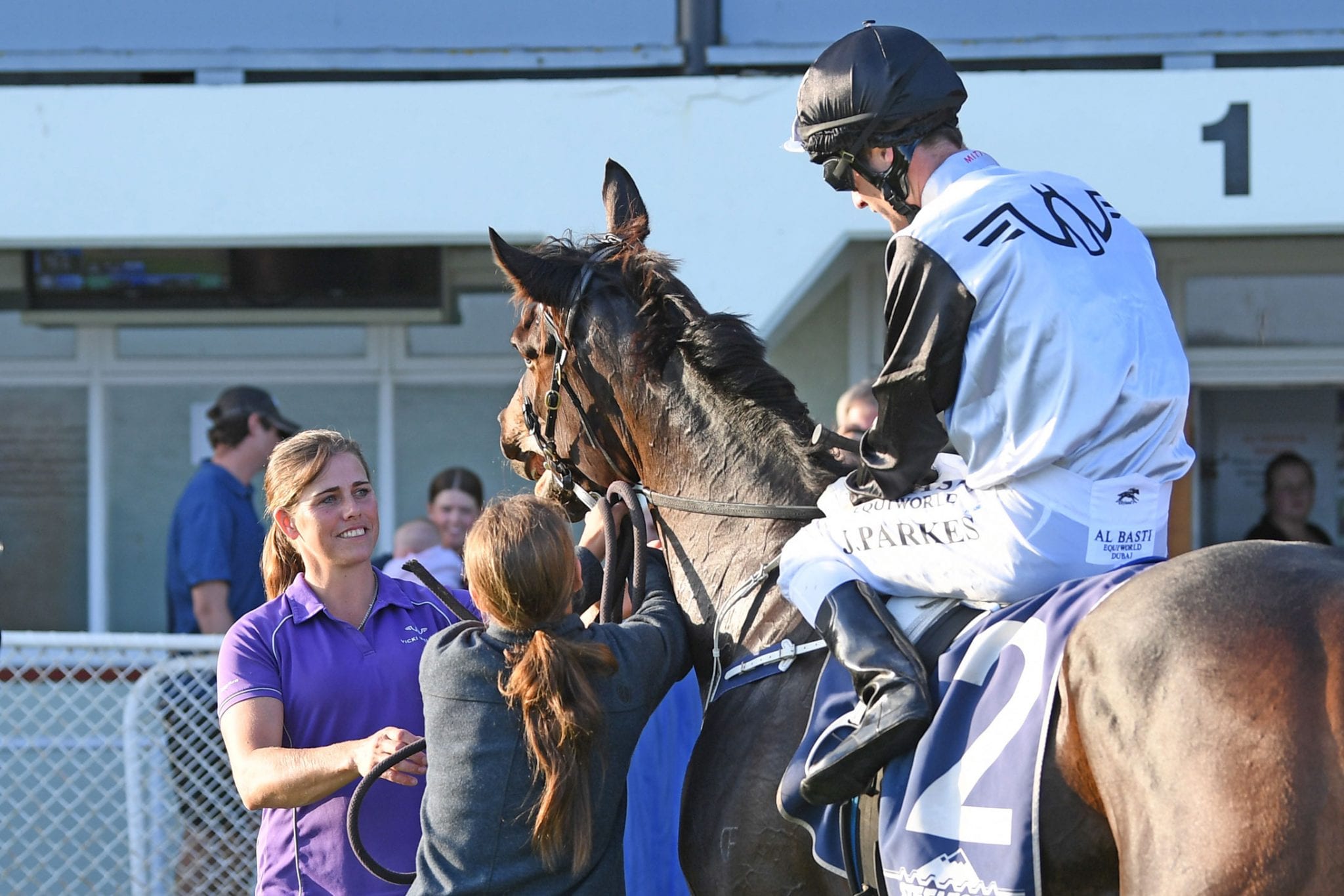 Well-known equestrian Vicki Wilson has reached the highs of the showjumping world and now she is trying her hand with racing.

The decorated rider is in her second season of training thoroughbreds and at Wanganui on Thursday she welcomed back her first winner in just her tenth start as a trainer.

Her maiden victory was brought up by Red ‘N’ Surf in the IG & RJ Hackett Farrier And Racing Maiden 2050.

Wilson was delighted to get the win and said it was a nervous feeling watching on the sideline compared to being in the saddle herself competing in a showjumping competition.

“It’s probably more nervous to watch,” she said. “You are relying on someone you don’t know (jockey) who hasn’t sat on the horse before, it’s the opposite to what we do with showjumping.

“We spend hours working our horses and riding our horses for showjumping and we compete them as well as do all of the home work, whereas the racing side of it we don’t.

“We are just incredibly lucky that Johnathan Parkes, and all the jockeys we have had on him so far, are very good riders. Johnathan gave him a superb ride.”

Red ‘N’ Surf took a consistent formline into Thursday, having finished second and fourth in his previous two starts, and Wilson was confident of another solid performance.

“I was very confident,” she said. “We knew from the previous race that he just needs a gap and as long as he has got a gap he is going to come home down that straight.

“When we work him at home at the track, once he gets down that home straight, that is where he has got the legs and the length of stride to start moving. We have told the jockeys that as long as you find him a gap, he will run you home.”

Wilson is in her second season of training racehorses although she has been working with thoroughbreds for many years and finally decided to take the plunge into training last year.

“I have been starting (breaking in) thoroughbreds for quite a few years now,” she said. “I started Red ‘N’ Surf for his breeder two years ago and I have been doing his horses consistently. When the trainers sacked him I was given him.

“I have been pre-training and starting for a while now and then somebody else asked if I was interested in having a go at it (training), and I thought ‘why not?’ I do it a little bit differently and we can give them a fun life at the same time.”

Wilson, who shot to fame as one third of the Wilson Sisters on the television series Keeping Up With The Kaimanawas, runs a world-class equestrian property in Hawke’s Bay and she said she is able to give her team a varied training programme with the farm’s facilities.

“To me it’s all about giving our horses a happy variety of life – they work on the hills, they swim in the river, work on the track, and chase the sheep. There is a little bit of everything for them,” she said.

“Being small, every horse is an individual, and we have got time to develop them and get them strong.

“We have got a couple of pre-trainers for some other trainers at the moment and then five myself, and two for an owner.”

While Wilson is enjoying the racing side of her operation, it is just a small slice of her business, which also includes rehabilitation, breeding, and showjumping.

“We have 150 horses here in total,” she said. “We have got rehab, racehorses, showjumpers, breakers for clients, there is a bit of everything here. It keeps us busy.

“We have a one kilometre track and gates at home. We have got a pool, water walker, and vibrating floor. We do a lot of rehab, including tendon repairs and ligament repairs.

“We have got a big (sport horse) breeding operation. We have got seven stallions and we do all of the embryos and AI ourselves.

“I think we have got three thoroughbred broodmares that we are breeding each season and I breed 20 showjumpers a year.”

While her breeding operation is heavily focussed on showjumping, Wilson hasn’t ruled out on expanding into standing a thoroughbred stallion.

“It is very easy for us to have stallions here because of our set-up and we socialise our horses a lot. It works very well.

“It’s a neat operation and we are very lucky with the facilities we have been able to put in.”

Wilson is loving being involved in racing, but admitted she is still learning a lot.

“I really enjoy the game of racing,” she said.

“I have got a lot to learn, it’s all very new to me. To me it’s just having a fit, strong horse, and as soon as I feel that they are strong enough in their body, and they are happy in their brain, then I can put pressure on them on the track.

“This guy in particular, Red ’N’ Surf, is really delivering and I think he is going to get better and better.

“I am not in a rush. I am here to learn and enjoy the sport, and see how far we can go.”