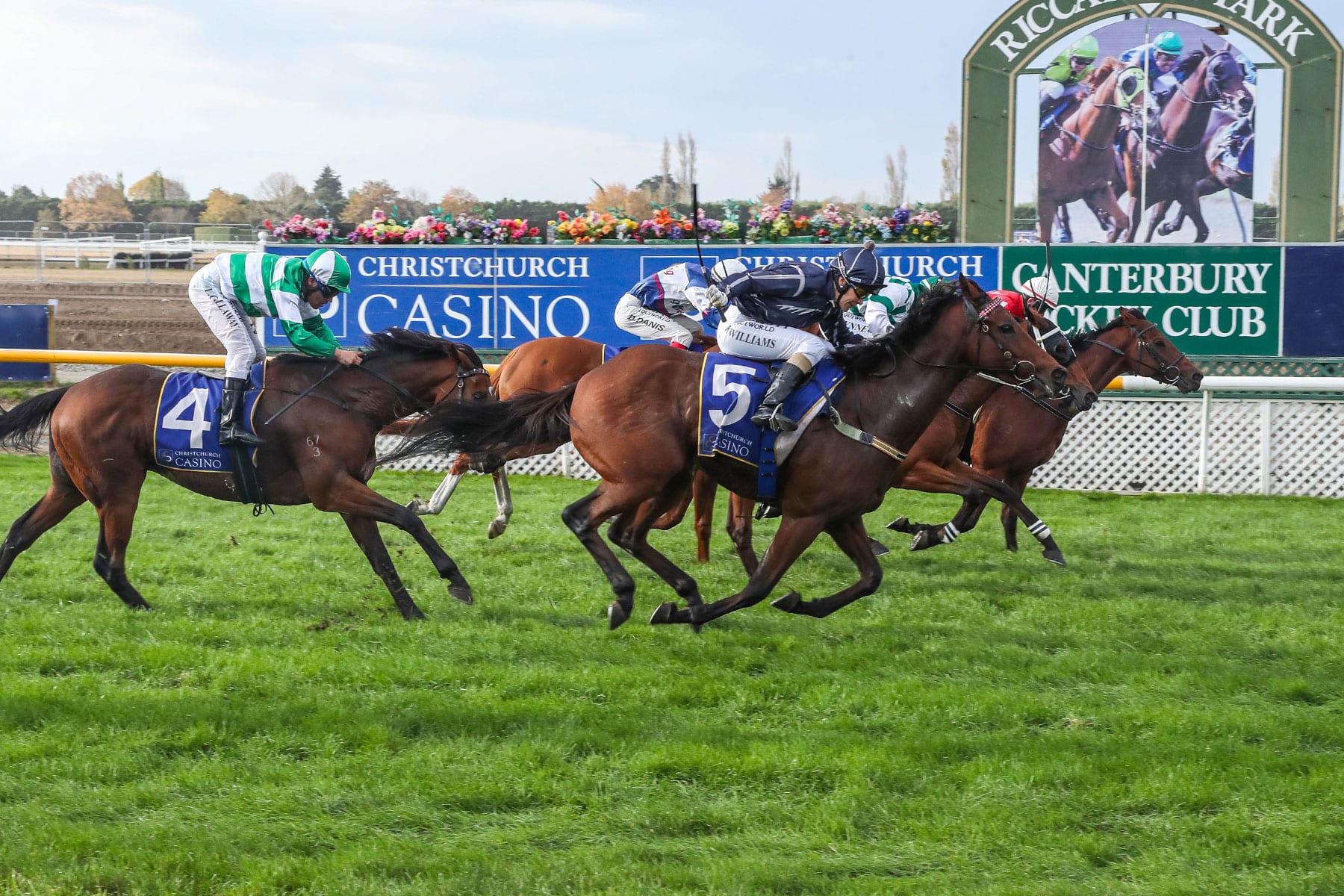 Promising galloper Whale Song got the big win he had hinted was coming when he dashed home along the inner to take out the Listed Christchurch Casino Easter Cup (1600m) at Riccarton on Saturday.

The five-year-old Ocean Park gelding handled the tricky Dead6 track conditions with aplomb as visiting apprentice Wiremu Pinn took all the shortcuts available to him along the fence to come out on top in a thrilling three-way finish,

Pinn stayed closer to the fence while the other riders spread out across the wide Riccarton home straight, with at least eight of the 15 runners looking a winning hope with 200m to run.

Pinn kept up an industrious ride as he got the best out of the Michael and Matthew Pitman-trained runner in the closing stages to defeat the fast-finishing Lightning Jack by a nose with a short head back to gritty mare Belle Fascino in third.

“He’s been knocking on the door all season and we thought he had a nice race in him,” Matthew Pitman said.

“He went a super race in the Timaru Cup (Listed, 1600m) back in December and has been competitive in good company ever since then.

“He’s a horse who has taken time to mature and I think you still won’t see the best of him until the spring.

“There were a lot of chances late in the race and the ride by Wiremu Pinn was what got him home.

“He got him through the difficult track conditions well and followed Dad’s (Michael) instructions to the letter.

“We do think he can get further in time as he went well for second over 1800m last time.

“That run probably fitted him nicely for today as the mile on a wet track was pretty tough.”

The victory completed the middle leg of a winning treble for the Pitman team with Kapalka getting a deserved maiden success in the first race and evergreen sprinter Benaud taking out the last race.

In between times dual Group One winner Enzo’s Lad showed he was ready for his next win once he strikes a suitable track after storming home out wide to take second in an open 1000m contest under topweight of 61kgs.

“It was a really good day for us and I’m thrilled with the other two winners we had,” Pitman said.

“They were ridden by our stable apprentices Meghann Gestain and Wesley Papier, who are both just getting their careers underway.

“For them to win a race on big day like this is very special.

“Enzo’s Lad also went super and just needs a dry track to get his next win. I know that is a big ask at this time of the year, but you saw the way he stormed home today on a surface he just hated and I think if he gets a track to suit then he is a massive chance.”

Whale Song was a $10,000 purchase by Michael Pitman from the Waikato Stud draft during the 2017 Select Sale at Karaka and has now won five races from 23 starts and over $114,000 in prizemoney