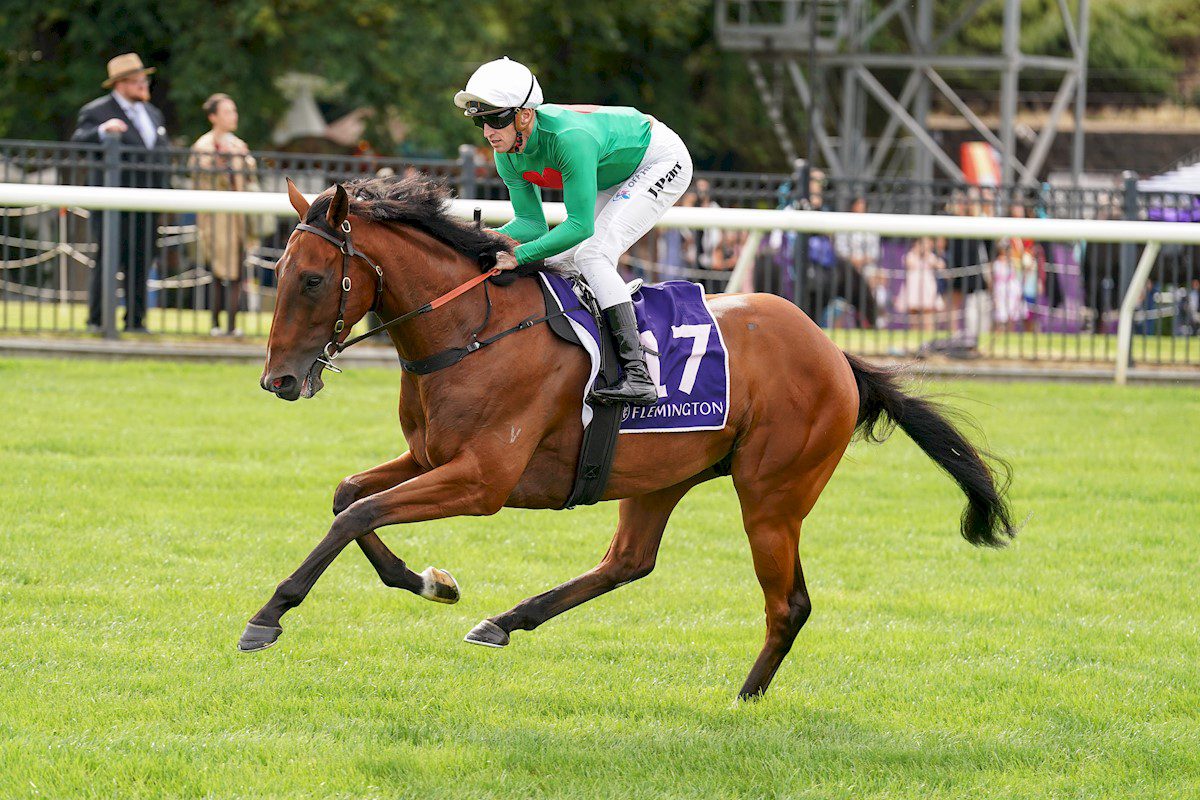 Ask and you shall receive.

In jockey Damian Lane’s case, it took an unfortunate injury to a fellow hoop, star rider Jason Collett, for his wish to be granted.

But Lane certainly won’t be complaining about having the opportunity to pilot War Eternal in the $2 million Bentley Australian Derby (2400m) at Randwick today.

Lane was aboard Bjorn Baker’s three-year-old colt when he finished strongly and ended in third place last start in the $750,000 DCE Alister Clark Stakes (2040m) at Moonee Valley on March 18.

“Damian Lane was really pleased with the run, and he approached us about riding him in the Derby,” Baker said.

“He kept fighting and finding the line.

“At the time we did have Jason Collett booked, but unfortunately for Jason he was injured a week ago, and Damian was more than happy to come up.

“He just thought that the 2400m and the Randwick track with a bit of sting out of the ground would suit the horse.

“And he gets all those three things (on Saturday).”

Baker was also delighted with War Eternal’s 2.5-length victory in the XXXX Handicap Benchmark 78 (1400m) at Rosehill on February 19, going on to mention he is confident his colt can step up to 2400m.

“He’s been in the top three-year-old companies right through this time. He won the Benchmark 78 and was dominant on a rain-affected track,” he said.

“And then he stepped up to the Randwick Guineas where he acquitted himself pretty well (fourth on March 5).

“We think that he’ll run 2400. There’ll be a question mark with him running that distance for the first time, but he gives us every indication that he’s really come on from the Melbourne trip.

“And we’re confident he’s going to run a big race.”

Baker has had a busy week, with Maurice’s Medad (jockey Josh Parr), Sea Treasures (Rachel King) and Akahata (Brock Ryan) to also run in the Australian Derby, with Ciaron Maher and David Eustace’s Hitotsu the +270 favourite with Australian online bookmakers.

Baker rates +4000 outsider Maurice’s Medad the best chance out of those other three starters.

“Maurice’s Medad has been competitive right through,” Baker said of the three-year-old gelding.

“And with the right form lines it was a very fast-run Australian Guineas and he was up on the speed.

“Even that day Josh Parr said to us ‘I think this horse is crying out for a further distance’.

“We went with a different plan with him down to Albury – we were trying to keep him on the dryer tracks. He just drew bad and unfortunately had to go back to last, but I thought it was a very good Derby trial (third in the $200,000 Commercial Club Albury Gold Cup over 2000m on March 25).

“And now he goes to the 2400m for the first time, where I think he’s been getting stronger and stronger.”

Despite his improvement, Baker does have reservations about a heavy track today.

“He’s probably one we’re more concerned about the track with. We’re not sure he can get through a really wet track,” he said.

“So that’s probably the blemish against him, but on top of the ground I would’ve thought he’d be a really big chance.

“We’ll just hope he can handle the track. He’s had a pretty good set-up as well.

“Josh has got a good opinion of him. We just think once he gets to that 2000m mark, that’s when he can take the next step with the topline three-year-olds at the moment.”

He likes the look of another talented colt, three-year-old Overpass (jockey Tim Clark), at +1500 to win with horse racing betting sites.

And he’s more confident of his chances on a heavy track.

“Overpass is a really good chance. He was unlucky in the Galaxy (fifth over 1100m and 1.5 lengths behind winner Shelby Sixtysix at Rosehill on March 19),” Baker said.

“He’s a big horse who needs to wind up. He does handle the wet track. He’s fit and he gets a big weight turnaround on Shelby Sixtysix (carrying 58.5kg on Saturday).

“There’s a good weight turnaround for him because he carried a lot of weight as a three-year-old in the Galaxy.”

Baker believes Rule Of Law is ready to bounce back from his ninth place in the Furphy Galaxy.

“Rule Of Law didn’t have a lot of luck in the Galaxy. He had to go back to last and he didn’t really get any luck when he needed it,” he said.

“(Jockey Brock Ryan) was really pleased with his run in the race. It just felt like he was ready to explode and he just couldn’t get the luck when he needed it.

“He’s got a favourable draw (barrier five with Brenton Avdulla aboard).

“He sits just behind the speed and he’s got to take that step up to this company. It’s his second go at Group level now, and he needs to take that next step.

“But we think he can. He looks well and he’s right in the race, and he’ll get the right run in the race.”

Baker has a similar opinion of five-year-old mare Belluci Babe, to be ridden by Parr.

“Belluci Babe ran fourth in the Galaxy. Same sort of thing. She’s right in the race,” he said.

“She’ll probably go back and she’ll hopefully be hitting the line hard.”