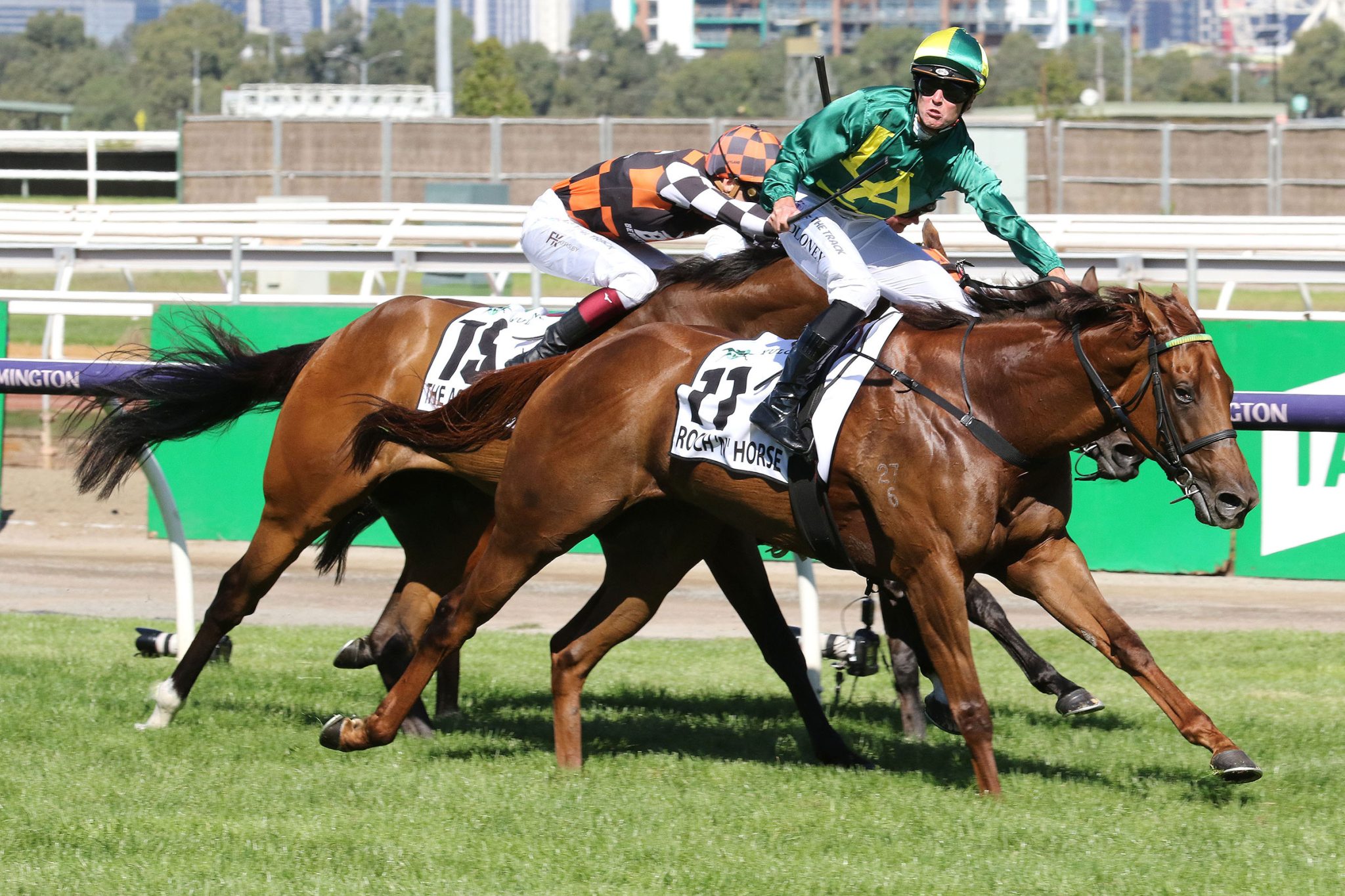 Three weeks after rocking the Australian sprinters with a Group One boilover in Melbourne, Little Avondale Stud has two chances of a repeat result at Randwick on Saturday.

The Wairarapa nursery’s green and yellow colours will be carried in the Group 1 TJ Smith Stakes (1200m) by Roch ‘N’ Horse, who defied +10000 odds in an extraordinary Newmarket Handicap (1200m) triumph on March 12, along with the in-form Belluci Babe.

“Having two runners in our colours in a Group One race during The Championships at Randwick – it’s ‘pinch yourself’ stuff, we can’t believe it,” Sam Williams said from Sydney. “Both mares are going really well, so we can’t wait to see what happens on Saturday.

“We’ve been over here for a few days now, and it hasn’t stopped raining the whole time we’ve been here. But the thing is that both mares are fit and in form, and the wet ground is going to have the same effect on all horses.

“There hasn’t been any racing at Randwick for a few weeks now, so it’s a bit of an unknown how the track is going to race. But there’s nothing to gain from just leaving them sitting in their boxes. Opportunities like this don’t come along all that often, so you’ve got to take them.”

Roch ‘N’ Horse was offered by Little Avondale at Karaka in 2018, where she failed to meet her NZD$40,000 reserve. The Mike Moroney-trained mare has now earned over NZD$1 million in a 13-start, four-win career, with her Newmarket Handicap heroics backed up by a second placing in a desperately close photo finish to the Group 1 Telegraph (1200m) at Trentham in January.

Belluci Babe, meanwhile, has been a quality performer across three seasons for expat Kiwi trainer Bjorn Baker. She has won six of her 19 starts, with another eight placings and over AUD$360,000 in stakes, headed by a win in the Group 3 Wenona Girl Quality (1200m) on March 5. She also placed in the Group 2 Millie Fox Stakes (1300m) in February, and was an eye-catching last-start fourth in the Group 1 Galaxy (1100m).

Both mares are daughters of Little Avondale’s star stallion Per Incanto, and Sam and Catriona Williams are sharing the ride with syndicates who are racing them under lease agreements.

“We own them both outright, and we’ve syndicated them out on leases,” Sam Williams said. “We syndicated them in the same season and both horses won on debut, so the syndicates got off to a fantastic start, and it’s just gone from there.

“Everyone who’s in the Roch ‘N’ Horse syndicate has a share in the other horse too, so they’re on a great ride.

“Saturday’s race was always the target for Roch ‘N’ Horse after her Newmarket win. She’s travelling up from Melbourne today, and Mike has reported to me that she’s thriving. She’s actually put on weight since Flemington, which is amazing to hear. I’m looking forward to seeing her in the flesh tomorrow.

“Belluci Babe was originally going to run in the Sapphire Stakes (Group 2, 1200m) next week, but Bjorn has just been so happy with her in recent times – especially in the Galaxy, where her closing sectionals were the second-fastest in the race.

“He told us that we had nothing to lose and might as well have a throw at the stumps in the TJ Smith. She has a good record in rain-affected ground, so should get through it well.

“I’ve been to see her this week, which was my first time seeing her in more than two years, and she’s looking fantastic. I also got a lot of pleasure from looking around Bjorn’s stable and seeing half a dozen other horses with our Little Avondale brand – that’s something to really put a smile on your dial.”

Williams will also keep a close eye on one of Per Incanto’s progeny in another of Saturday’s Group One features.

“It really demonstrates the versatility of Per Incanto as a sire – not only does he have those two mares in the TJ Smith, he also has a runner in the (Australian) Derby (2400m) with Can’t Go Wong,” he said.

“He’s trained by Ciaron Maher and David Eustace, and he’s a last-start placegetter in the Alister Clark Stakes (Group 2, 2040m). I think that’s a real feather in the stallion’s cap.”

Little Avondale’s activities in Sydney this week are not limited to the racetrack, with yearlings by Savabeel, The Autumn Sun and Dundeel set to go through the ring during the Easter Yearling Sale.

“We’ll be over here for a few days, with three nice yearlings going through Sledmere Stud’s draft during the sale next week,” Williams said.

“So we’ve got a bit to look forward to with Saturday’s racing, and then seeing what happens in the sale ring as well.”