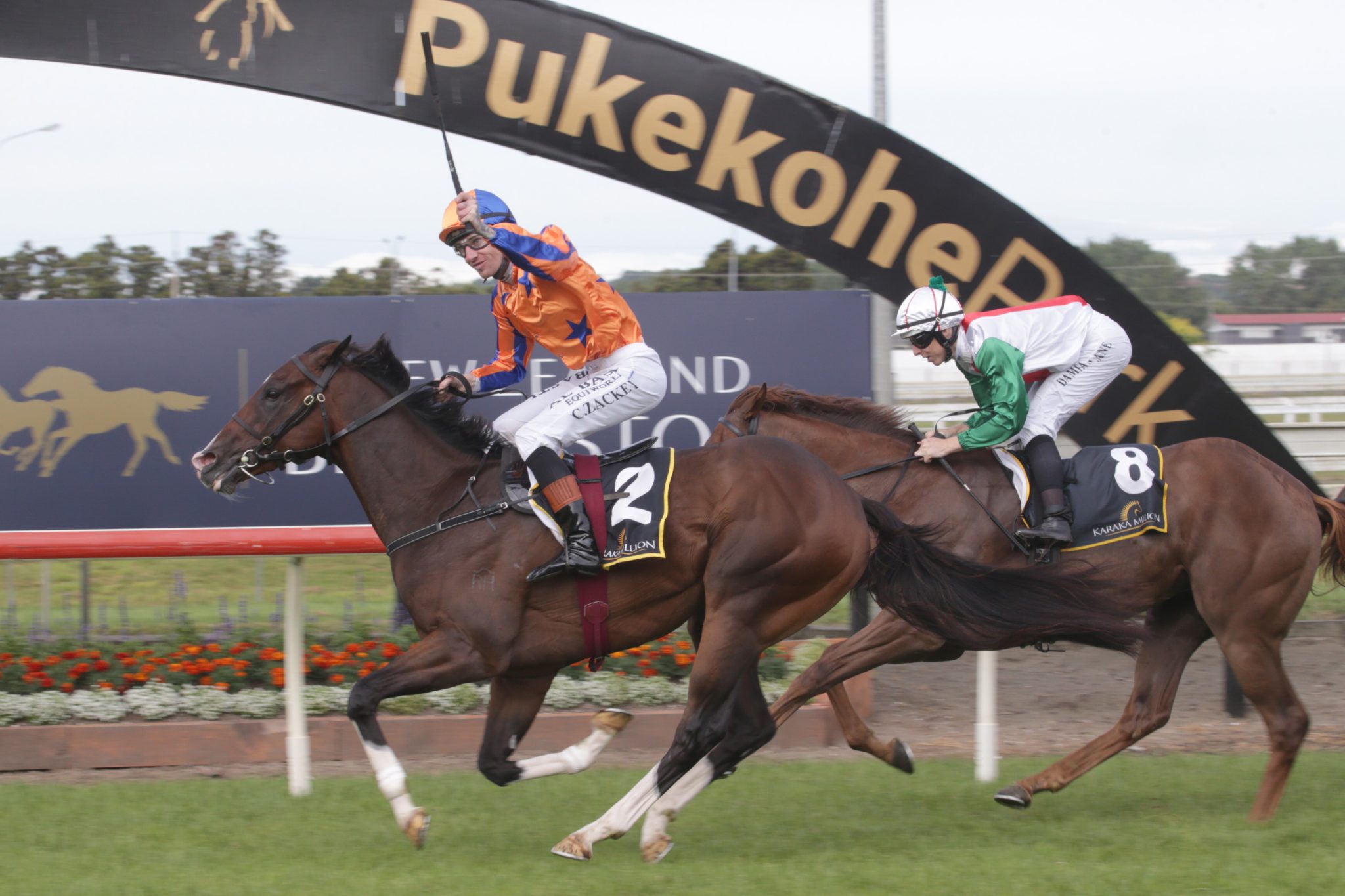 Unbeaten juvenile Tokyo Tycoon has come from last to score a stunning victory in the Karaka Million 2YO (1200m) under an inspired Craig Zackey ride.

The Mark Walker-trained son of Satono Aladdin continued Te Akau Racing’s strangehold on the million-dollar feature, with the powerhouse stable having now claimed the past seven runnings.

Much of the pre-race build-up had focused on which of the seven Te Akau runners leading jockey Opie Bosson would select, with the star hoop eventually plumping for Trobriand over Tokyo Tycoon once the latter drew wide in barrier 13.

South African rider Craig Zackey would be the beneficiary of that decision, picking up the ride on Tokyo Tycoon who had impressed in his two victories at Te Rapa and Pukekohe respectively.

After the gelding was tardy into stride, Zackey made the crucial call to take his mount back to last on the rails and ride patiently.

The 27-year-old rider was able to extricate Tokyo Tycoon off the fence mid-stretch and the high-class juvenile did the rest, mowing down runner-up Ethereal Star to score by almost a length, with stablemate Trobriand fighting on well for third.

“I didn’t want to be the one that jinxed it after Steve Autridge and Jamie Richards did such a great job, and then after that Jamie on his own.

“It is very satisfying.”

Tokyo Tycoon was purchased as a yearling by Te Akau principal David Ellis in March last year at the Karaka Book 1 Sale, paying $125,000 for the then colt from the draft of Rich Hill Stud.

“You go anywhere in the world and try and find someone like David Ellis that has bought seven consecutive winners of any big race in the world. You have got to take your hat off to him,” Walker said.

“Our job is pretty easy with the yearlings we get given to train but we have got a great crew of staff and they’re very passionate.

“I think the best horse on the day won the race and it just goes to show that anyone can own a racehorse. He wasn’t an overly expensive yearling and he has a great syndicate. He was actually the last yearling that we could sell.”

The win was another feather in the cap for jockey Craig Zackey, who has proved a tremendous addition to the New Zealand riding ranks since relocating from South Africa in November.

“It is unexplainable. I have only just moved here and I have won one of the biggest races. It is overwhelming,” Zackey said.

“Mark left it up to me and I thought I’d leave it up to the horse.

“After falling out of the gates like that, losing ground, getting back on his feet, finding a rhythm again and then to go and hunt down eight or nine lengths in the straight — that is what a good horse is made of.

“I couldn’t have dreamt for this to happen. I think it will probably take a day or two to really hit me but for the time being I am just really glad for Mark Walker and Sam Bergerson (Assistant Trainer).

“You can’t see the work that is put in. They have got a massive operation and I am just glad that they have given me the support and pleased that I have been able to improvise and do the best that I can.

“All credit to Tokyo Tycoon. He’s a superstar and this is for my family back home.”

The win was another boost for Rich Hill Stud shuttle stallion Satono Aladdin, who won the highest rated mile in Japan, the Group 1 Yasuda Kinen (1600m) running an incredible 1:31.5 and has proved hugely popular amongst New Zealand breeders.

Out of All About The Coin, a three-time winning daughter of Starcraft, Rich Hill Stud will present a half-sister to Tokyo Tycoon by Vadamos at next week’s New Zealand Bloodstock National Yearling Sale at Karaka, catalogued as Lot 24 of the Book 1 Sale which commences on January 29.