The Harrovian ready and raring for Stradbroke Handicap 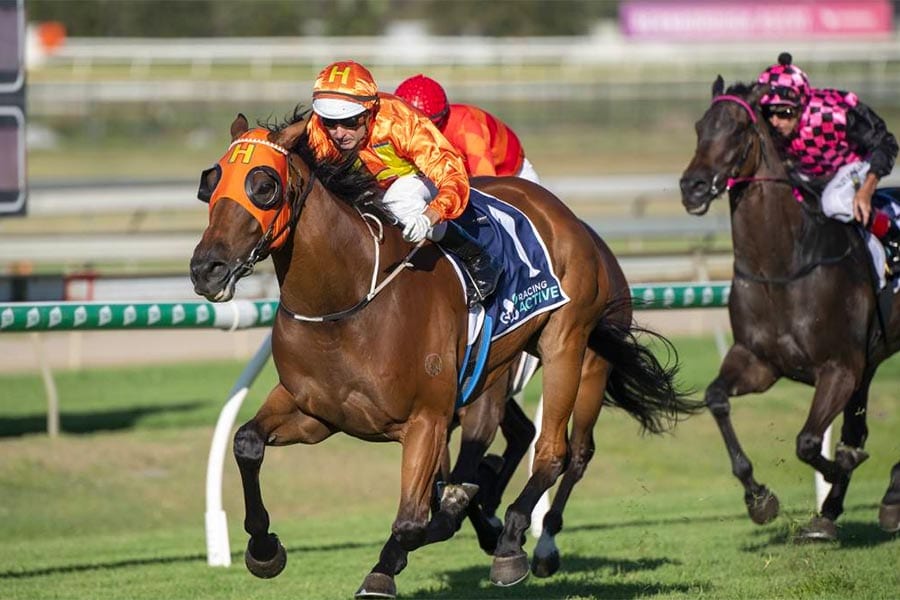 Australian cult figure The Harrovian is “spot on” ahead of Saturday’s Group 1 Stradbroke Handicap at Eagle Farm according to his co-trainer Trent Edmonds.

Rated a $9.50 chance with most online bookmakers, ‘The Big H’ is one runner who is likely to relish the pressure cooker that is the Stradbroke.

“The Harrovian, he’s had a tremendous week so far,” Edmonds said.

Originally trained in Victoria by Jim Conlan, the son of Fastnet Rock was then sent north to be trained by Steve Massingham in Townsville, where he was near unbeatable, winning 12 from 14.

In those 12 wins, the now seven-year-old chalked up a Townsville Cup, Cairns Cup, Cairns Amateur’s Cup and Cairns Newmarket, all while on an 11-race win streak which also included two Listed wins at Doomben and Eagle Farm.

The cult following earned The Harrovian a spot in this year’s All-Star Mile at The Valley, where he held his own to finish fifth behind Mugatoo, Russian Camelot, Behemoth and Lunar Fox.

Now residing on the Gold Coast and coming in second-up off a brilliant third in the Doomben 10,000, The Harrovian looks ready to go ahead of Saturday’s $1.5 million Stradbroke over 1400m.

“Obviously everything has been tailored to grand final day on Saturday and he had that perfect jump-out on Saturday (June 5th) back home where he performed beautifully and did another short, sharp piece of work Tuesday morning and he pulled up tremendously well.

“He’s in a really good spot and obviously form lines around him in the Doomben 10,000 four weeks ago are pretty good.”

Originally drawn in barrier 11 under fellow Queenslander Glen Boss, the gelding is likely to come in to barrier nine after emergencies are withdrawn.

“He’s a lovely big horse, big action and a nice bit of clear air at the right time will do him the world of good.”

While 2020 Stradbroke Handicap winner Tyzone will not be lining up again, The Harrovian will be in the same colours for prolific Cairns owner Tom Hedley.

Hedley, along with former trainer Massingham and what seems to be a plane-load of loyal supporters, will make the 1700km journey on Friday to be trackside for their local hero on Saturday.

“We’ve got 30 of them going down tomorrow and a few more supporters from the South-East are coming to our big group, so looking forward to it,” Hedley said.

Despite already knowing what it takes to win a Stradbroke, the situation has not been made any easier for Hedley and connections.

“The butterflies are flying, the nerves are there,” he said.

“Every time I think of it I get very toey.

In 2020, no crowds were allowed on course to see Tyzone win due to COVID-19, so this year would be even more special to Hedley if the horse affectionately known as ‘Harold’ can win the famous race.

“Probably more this year than what there was last year with the little horse that won it (Tyzone) because the horse has got a pretty good record up here and it’s more alive now with people able to go to the track.”

The Harrovian gets in with just 53kg for the 2021 Stradbroke Handicap, which is set to be run at 3:53pm on Saturday afternoon.