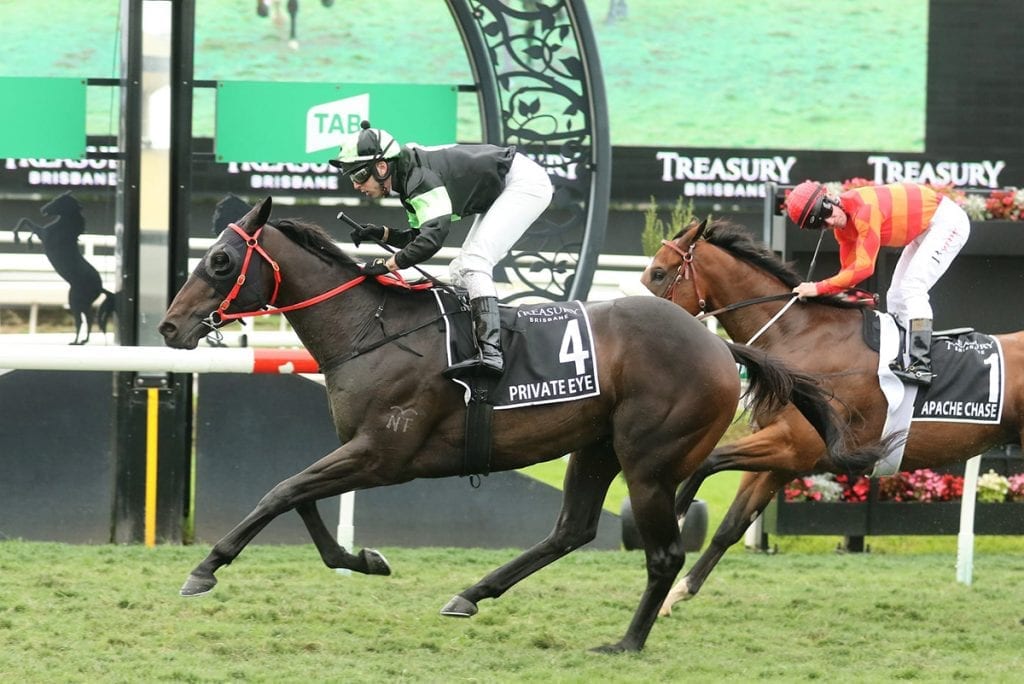 Private Eye, a three-year-old son of Al Maher was a noted drifter in the betting market prior to the jump of the Group 2 Queensland Guineas, and at the bend Brenton Avdulla thought the market had it right.

“I was very confident – he began well out of the gates, but it’s a funny surface this (Eagle Farm),” Avdulla said.

“He just seemed to not travel his best for me and I had him under hard riding before the corner.”

“I thought it was going to be a waste of time to be honest.”

After jumping well, Avdulla snagged Private Eye back to the tail of the field which is his usual racing pattern, but after asking for an effort upon straightening he didn’t look to be travelling well enough and was spotting the leader and heavily backed favourite Apache Chase a big start.

“I just gave him his chance and rode him like the best horse, got him to the outside,” he said.

“Once I put him under a bit of pressure, I felt he was strong straight away at the top of the straight.”

From last to first! Private Eye runs down Apache Chase to win the G2 Queensland Guineas for @PrideRacing under @BrentonAvdulla! 👏 pic.twitter.com/vfxXcPMmtL

Rollinwiththeflow and Apache Chase set a solid tempo in front, which helped Private Eye’s winning credentials, with the Sydneysider running home in 37.43 seconds over the final 600m on a Soft 5 track.

“There were two different horses there,” he said.

“The one I had before the corner was going to run last.

“And once I got him to the outside, he finally knuckled down and did it well.”

Avdulla described the son of Al Maher as a laid back customer, recalling the two times that he has won on him that he never travelled like the winner either time.

“When you put him under pressure he responds for you,” he said.

“I think today up against Group 2 class probably brought that out even more.”

“To his credit he got there.”

“I’ve got no doubt if the stable wanted to set him for a Derby, he’ll probably head that way,” he said.

“He just relaxes so well and his best work is always his final furlong.”

“I never tell Joe (Pride) what to do with them, he’s a master horseman and I’m always happy to ride wherever he takes them”