Teetan bags a birthday brace, So goes big at the Valley 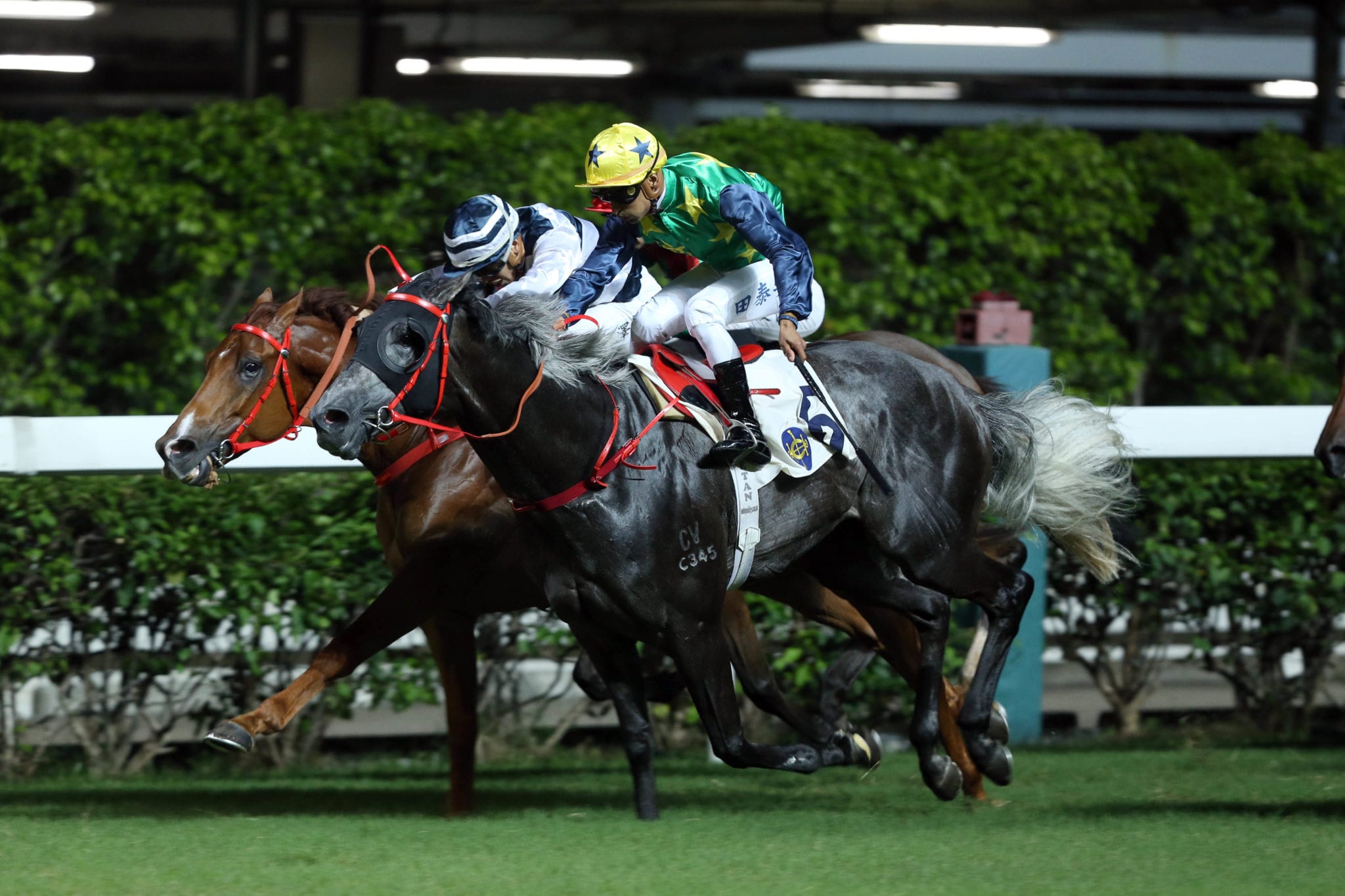 “It’s nice to get a winner on a special day and I hope the luck can keep going,” Teetan said after marching to 76 wins for the term, eight short of last season’s personal best.

“The blinkers helped a lot,” Teetan said. “I trialled Reliable Team a few weeks ago with them on and he trialled nicely. He still looks around a bit and does funny things, so I don’t think he’d have won without them tonight.

“I was worried that he was doing a bit too much but once I got him some cover he slept straight away; when I pulled him out he wanted to go next to that horse and he kept fighting him.”

Reliable Team took his record to five wins from 13 starts. The four-year-old finished a creditable fifth to Golden Sixty in the BMW Hong Kong Derby two runs back and stepped out this evening off a seven-week break.

The Reliable Man (127lb) gelding found himself up against Derby sixth Butterfield (133lb) in the run to the line and confirmed that classic form by a hard-fought short-head.

“He’s definitely improved and he’s going the right way,” Teetan said. “He needed the freshen-up and after the summer break you’d think he’ll come back a better horse.”

Teetan’s success on Murray’s Partners in section one of the Class 4 Wyndham Handicap (1650m) continued the late-season upsurge of Dennis Yip whose stable had seven wins in May; the four-year-old broke his maiden at the 13th attempt, having dropped to a mark of 40 from a debut rating of 52.

“I picked up the ride on entry day, so I really appreciate Dennis Yip’s support – the horse was very well,” Teetan said.

Top Military (117lb) delivered a bazooka of a shock in section two of the Class 4 Staunton Handicap (1200m) to help jockey Ben So to his first double since November 2016.

The six-year-old became the longest-priced winner at Happy Valley since Hong Kong racing turned professional in 1971, rattling home at odds of +28300 under So to pip the -166.67 favourite Sky Show (133lb).

“Unbelievable!” So said after weighing in. “If you see the record of the horse, you couldn’t expect he’d run that well.”

Top Military won a couple of races on wet tracks in New Zealand back in 2017 but had gone eight races without success in his injury-hit Hong Kong career, including when last of 12 over 1650m a month ago. The Benno Yung-trained gelding had previously raced around at odds of +43400 and +37400.

“I think the first-time blinkers must have changed the horse,” said So, who will retire at this season’s end. “He was flying home. I’m very happy anyway!”

Winning Associates holds the overall professional era Hong Kong record with his +31700 win at Sha Tin in 2001 but back in the amateur days of 1968, a +35600 shot prevailed at the Valley. And, digging back even further, in 1939, before thoroughbreds took over the circuit, a ‘pony’ named Starlet paid $3,711.10 for a win in the Nil Desperandum Stakes over a mile, although the record is unclear about whether that was for a $10 or a $5 stake.

So followed up aboard the +5200 chance Divine Unicorn in the Class 3 Lyndhurst Handicap (1650m). The Chris So-trained six-year-old broke his local maiden at start 15 to give his rider a fourth win for the campaign.

Lui and Moore not done yet

Francis Lui posted a reminder that he’s still in the running for the trainers’ title when saddling two winners.

First came Winston’s Lad (119lb) who surged late under Vincent Ho to nick race two, section one of the Class 4 Staunton Handicap (1200m), by a nose from Daily Beauty (114lb).

Lui doubled up thanks to Highland Fortune in the finale, the Class 3 Graham Handicap (1200m), a victory that took the handler to 53 wins and moved him past Tony Cruz to regain second position, four behind Ricky Yiu.

Highland Fortune’s win meant champion jockey Zac Purton got the win he needed to extend his lead over Joao Moreira to five, with the score 128-123 after a winless programme for the Brazilian.

John Moore’s hat is still in the ring for champion trainer too, and the handler advanced to 50 wins with a double in tandem with the burgeoning Brazilian Vagner Borges.

First up was Beauty Happy, who took the opener after setting a snail’s pace. Borges made use of gate one to take an easy lead in the Class 3 Old Bailey Handicap (2200m) and was allowed to set leaden fractions – well outside standard through the first four sectionals – before charging home swiftly down the home straight for a breezy two and a half-length score.

Borges then set the perfect tempo in the Class 4 Shelley Handicap (1000m) aboard We The South, the three-year-old held the late-charging Jazz Steed (121lb) by the slightest nose.

Ho nailed a double when the Caspar Fownes-trained Lightning Steed took section two of the Class 4 Wyndham Handicap (1650m) to land his second win on the bounce.