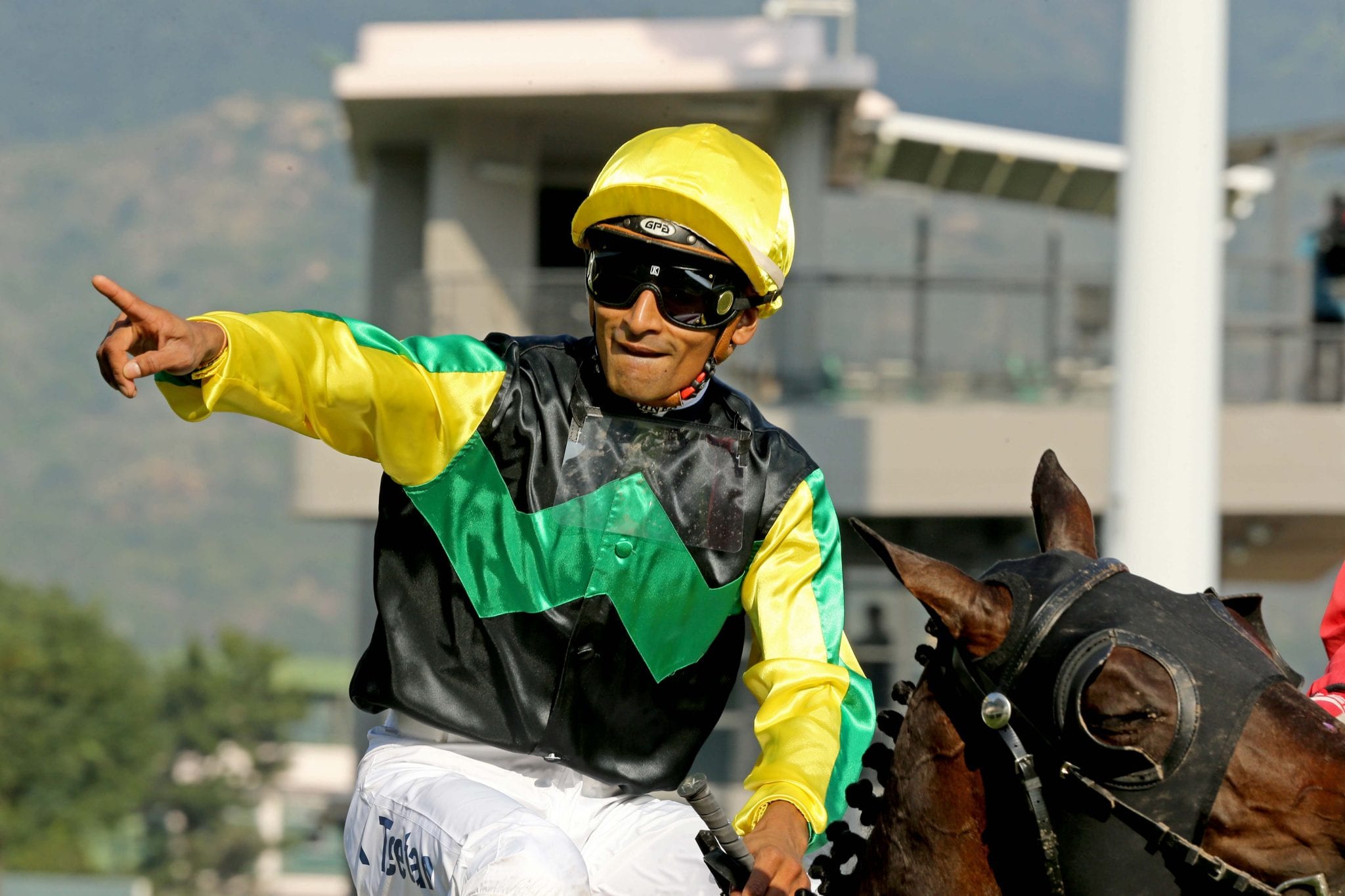 Karis Teetan snared three wins at Sha Tin on Sunday (18 October) and the man they call the ‘Mauritian Magician’ is eyeing outright second spot in the jockeys’ premiership as he heads to Happy Valley on Wednesday, 21 October for a full book of rides.

Teetan’s Sunday treble moved him to 16 wins this season, joint-second with Zac Purton, while Joao Moreira sits first with 21 wins, and the rider is picking up the kind of support that suggests he might well shake up the Purton-Moreira championship duopoly.

As well as his three-timer, Teetan was in solid form across the entire weekend card and went close in the afternoon’s two Group 2 contests, including a narrow miss to the Dennis Yip-trained Wishful Thinker in the Premier Bowl Handicap (1200m) aboard the exciting emerging talent Computer Patch.

“It was a nice weekend, it’s nice to have three winners on the day, so let’s hope it keeps going,” Teetan said. “I thought Computer Patch went good in the Premier Bowl: he had a light weight, so I thought he was going to get away with it, but it was his first time taking on the big boys.”

Teetan and Yip will be on the same side on Wednesday with two key chances: Murray’s Partners in section one of the Class 4 Tin Wan Handicap (1650m) and Flying Bonus in the finale, the Class 3 Po Chong Wan Handicap (1200m).

“Flying Bonus ran a good race last time – I know the horse better this time, he was just touched off last time and he’s been doing very well in the mornings, so I’m looking forward to him running a good race again,” Teetan said.

The Snitzel gelding arrived in Hong Kong as a two-time winner and his one win from 21 starts since came over the course and distance in Class 4. This time he is up in grade for his third start of the current campaign. “I think he’s good enough to win in Class 3,” Teetan said of the 68-rater.

“Flying Bonus is a good worker in the morning, he had a nice piece of work on the grass and he should run well again, especially as I know the horse better this time,” Teetan said.

The gelding’s task is not easy though as he faces 11 rivals, including Californiadeepshot (133lb) who gets seven pounds taken off thanks to apprentice Alfred Chan’s claim, as well as last-start victors Wind N Grass (127lb) and Amazing Kiwi (120lb), Prince Of Gems (121lb) and Cue The Music (120lb).

The field also includes the Francis Lui-trained High Rise Soldier (122lb) who gets the services of Purton from gate five. “He’s good but he still isn’t quite concentrating, I’m not saying he’s a cheeky horse, he has ability he just doesn’t 100 percent concentrate – he needs a good draw and everything to suit him,” Lui said.

Murray’s Partners will kick off Teetan and Yip’s midweek association in race five. The Mauritian partnered the five-year-old to back-to-back wins at the tail-end of last season and the pair teamed for a close third first-up this term.

“I thought it was a good run last time, he actually came out a bit sluggish from the gates and he didn’t show a lot of speed but I left him alone and he finished off nicely. I thought he needed the first run and he should have come on from that with improvement,” Teetan said.

The New Zealand-bred will break from gate three with 130lb on his back against a field of 11 others, in search of his third course and distance success.

“He has a good draw again and we’ll make sure he’s nice and focused and get him into the right spot,” Teetan said.