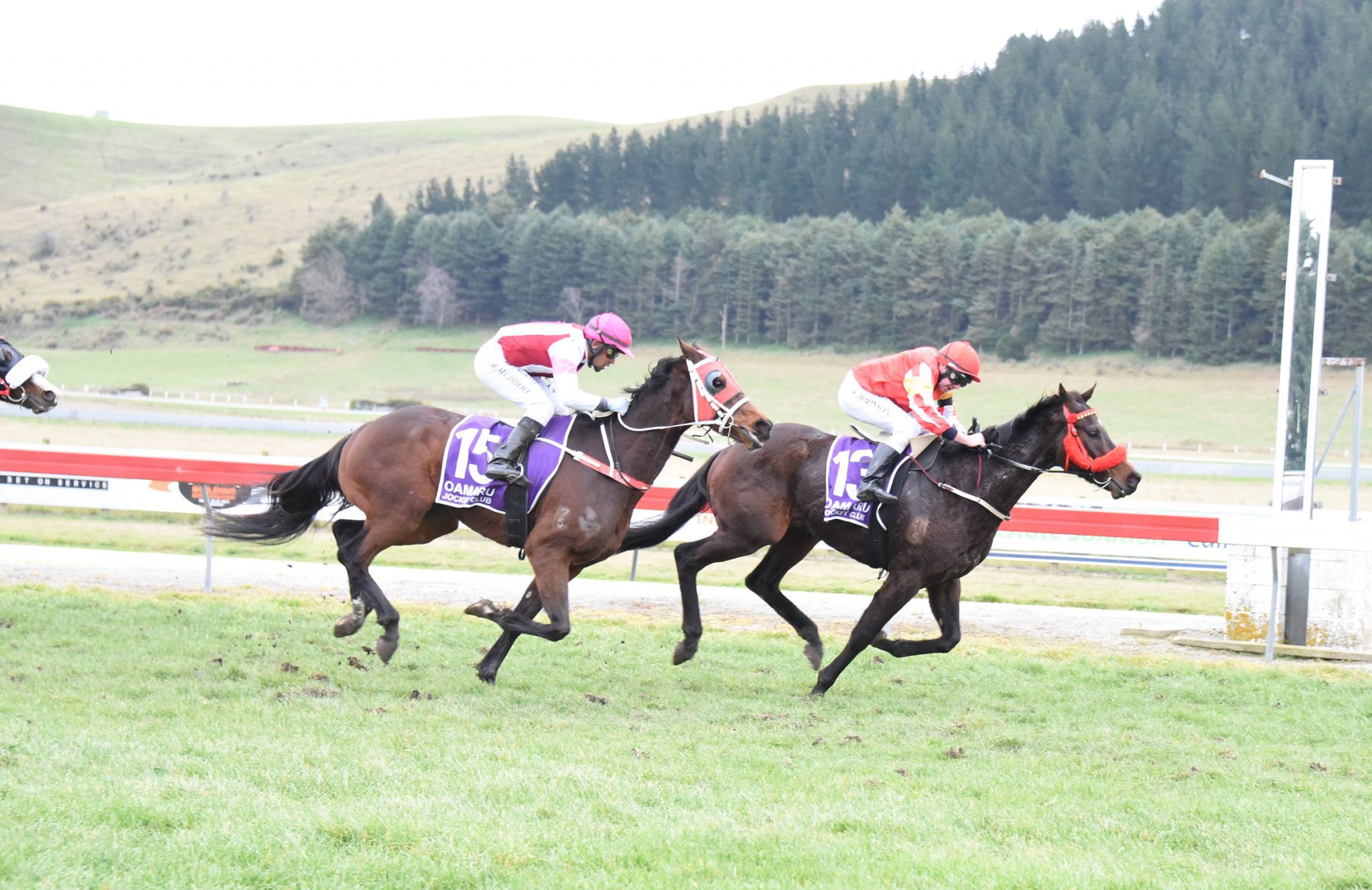 Underrated winter galloper Tappy’s One cemented his claim to being the most improved horse in commission in the South Island at present with a gritty win in Sunday’s Crombie & Price Ltd Oamaru Cup (1600m).

The four-year-old son of Proisir joined the Kerry and Ian Taplin stable at the start of the year after nine runs for Ardmore trainer Stephen McKee, which netted a solitary victory over 1200m at Tauranga as a two-year-old.

After three unplaced runs, Tappy’s One picked up his first southern victory over 1600m at Timaru in May and has proved a model of consistency since with four further wins from five starts including the Amberley Cup (1600m) at Riccarton at his previous run.

Handled patiently by rider Chris Johnson, Tappy’s One sat three-wide on the testing Heavy11 surface before sliding forward to tackle pacemaker Quiz Kid at the 400m.

Johnson pushed the button on Tappy’s One early in the run home and he shot away from stablemate Ritani before holding out a determined late run from Take The Deel who took second off Ritani in the last 50m.

Ian Taplin was thrilled to get the win, although he believes his charge is twice the horse on firm going.

“He is just doing it on sheer class as he doesn’t really handle the wet,” he said.

“You would think I’m mad saying that, but when we have seen him gallop at home on top of the ground I just can’t wait to get him up to 2000m on good ground as I think he will be even better.

“It was a super run today and Chris didn’t knock him around as he knew we’ve got an even bigger mission in a fortnight.”

Taplin was referring to the Group 3 Winning Edge Presentations Winter Cup (1600m) at Riccarton where Tappy’s One will be late nominated for the feature flat event at the Christchurch Winter carnival.

If he is successful at Riccarton, Tappy’s One will earn a NZD$36,000 bonus put up by the Oamaru Jockey Club for any horse that can win both the Oamaru and Winter Cups.

“It was always the intention to run in the Winter Cup and that extra NZD$36,000 would be a pretty good reward for two weeks’ work,” Taplin said.

“I’m not too sure what weight he will get but we have to have a go now.”

Bookmakers reacted swiftly to the victory, installing Tappy’s One as the +350 second favourite in the fixed odds market behind impressive Listed Opunake Cup (1400m) winner, Justaskme.

Bred by Taplin and his late father Syd, Tappy’s One is raced by Taplin and the estate of legendary New Zealand Racing Hall Of Fame trainer Trevor McKee, who purchased him for NZD$20,000 out of the Rich Hill Stud draft during the Book 2 sale at Karaka in 2018.

He is a son of useful racemare Tappy Lee and comes from an extended family that includes multiple stakes winners Petanque, Red Baron and Group 1 Levin Classic (1600m) winner Bunker.

With the Oamaru meeting being the last of the season in the South Island, the battle for leading South Island trainer went down to the wire and ended in favour of the Michael and Matthew Pitman partnership who took out the last race of the day in a desperate finish with St Andre.

The victory took their tally to 58 wins for the season after earlier scoring with former North Island galloper Benaud, which was one in front of Kelvin and Aimee Tyler who had levelled the contest at 57 wins when Dunhill won by 13 lengths over 2200m in race 5.

The Pitmans and the Tylers sit third and fourth respectively on the national trainers’ premiership, which is headed by Jamie Richards (160 wins) with Stephen Marsh (90 wins) in second.