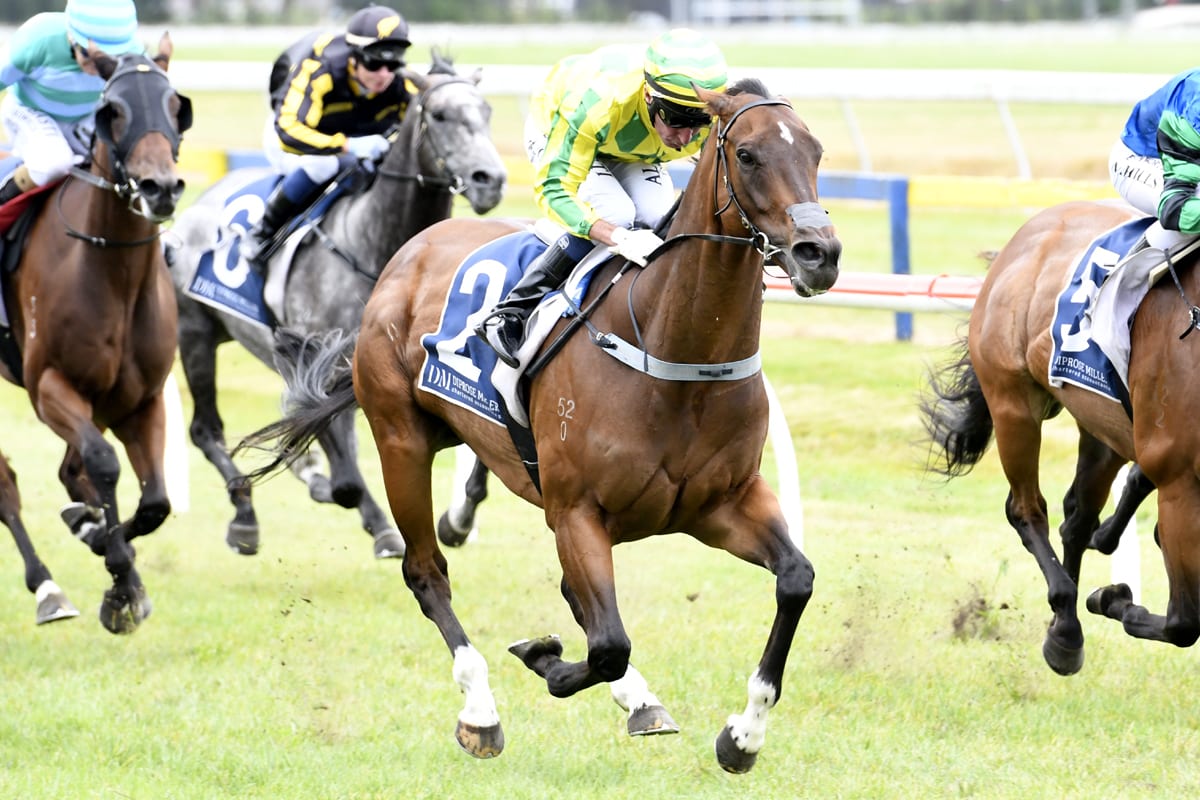 Shelley Hale is hoping her trip north to Ruakaka on Saturday is less eventful than a fortnight ago. The Cambridge trainer was on her way to the Northland track with stable runners Seventh Up and Go Nicholas, however, a blown tyre on the Auckland Harbour Bridge put paid to those plans. “I just had a blowout right on top of the harbour bridge,” Hale said. “I got off to the side safe and sound, but we were parked on the side of the road for two-and-a-half hours. “It took them (roadside assistance) ages to turn up and then they turned up with the wrong sized tube. “If they had turned me around in an hour I would have had tonnes of time to get up there. “But as frustrating as it was, there are worse problems in the world.”

All was not lost, with Hale electing to line-up Go Nicholas at Tauranga last Saturday, where he finished sixth over 1200m on the Heavy 11 track, and she said he will appreciate the better track conditions (Dead6) at Ruakaka on Saturday. “That track was too heavy for him, but he still tried a bit in the straight, so we thought we would just get him back onto a better surface at Ruakaka and see how we go.”

While the seven-year-old gelding will have a week between runs when he contests the Northpine Waipu Cup (1400m) on Saturday, stablemate Seventh Up will be heading into the race in a fresh state. The son of Shinko King hasn’t raced since his unplaced run in the Group 1 Livamol Classic (2040m) at Hastings last October, but he pleased Hale with his 935m trial win last month.

“I’ve taken plenty of encouragement out of the 900m trial at Cambridge. It’s hard to get back and come and win, and he did that,” she said. “I don’t know how strong it was, but he did all we could ask of him. He looks really well, so it just proved that he is feeling good. “(The fortnight delay) shouldn’t affect our plans too much. It would have been nice to get a 1200m run into him, but he’s working really nicely and 1400m to a mile is his best trip. I think we have got him fit enough, it’s just he is a clear topweight.”

Seventh Up will carry 60kg, five kilograms more than the rest of the field, and Hale said drawing the ace barrier with her charge is no aid. “He hasn’t got a lot of gate speed, so barrier one is not going to be a lot of help to us. He tends to get back a bit, so I can’t see that changing an awful lot. “He’s got a great turn of foot, so we’ll have to go on that.” While Seventh Up is the clear topweight in the field, Go Nicholas is at the opposing end, carrying 51kg, with the aid of apprentice jockey Ashvin Goindasamy’s three kilogram claim.

“I just thought it was worth a try to take that extra three kilos off,” she said. “We would like to ride him handier and we will be trying to do that, he has got a good gate (barrier three), so we will try and get him out and get him travelling.”

All going to plan both geldings will contest next month’s Listed Opunake Cup (1400m) at New Plymouth, however, Go Nicholas will have to put in a good showing on Saturday to secure his racing future. “We’ll see how we go on Saturday, but that’s the plan, especially with Seventh Up,” Hale said. “Go Nicholas will have to do something on Saturday to warrant him going there (Opunake Cup). “He’s getting to the stage where he has got to recapture some of his form, otherwise we will be thinking about how long we keep going with him.

“The horse is working really well, we’re pretty sure he’s just lost interest a little bit because he’s just not getting out of the gates. “He’s running home in good sectionals all the time, he’s just way too far off them. We just need to get him out and travelling.”