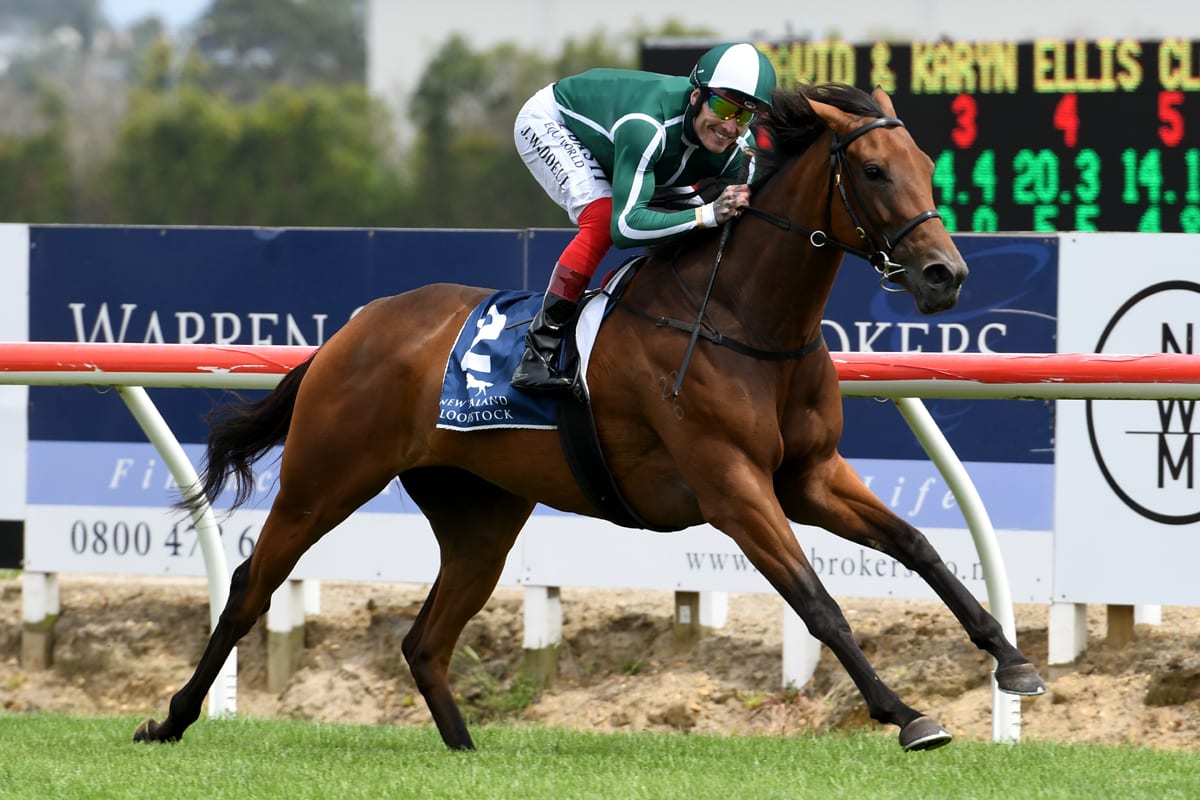 The Challenge No.10 Syndicate members know they will eventually have to part with their exciting filly Jennifer Eccles, but are set to enjoy more highlights before her farewell. Already the syndicate, assembled by Cambridge bloodstock consultant Adrian Clark, has seen the Shaune Ritchie-trained filly impressively win two Group 2 features and be a Group 1 runner-up and on Wednesday many of them will flock to Hastings to watch her contest the Group 2 Little Avondale Lowland Stakes (2100m).

The Rip Van Winkle filly is one step away from her New Zealand three-year-old finale, the Group 1 Al Basti Equiworld Dubai New Zealand Oaks (2400m) at Trentham on March 14, and further black type will eventually equate to even more of a pay-out for the syndicate members when they finally sell her.

“One of the conditions of all my syndicates is that each horse will eventually be sold either at the end of their racing career or sooner if circumstances arise and it’s a good idea to take a huge offer,” Clark said. “I have this exit strategy in place and in the case of Jennifer Eccles the syndicate will be in for a big pay-out when it finally happens. “Her value is already substantial and she’s not finished yet. It’s certainly oceans apart from the $5000 I paid for her as a Karaka weanling.”

Clark introduced the Challenge Racehorse Syndications in 2012 and has concentrated only on purchasing female stock. “I only ever buy fillies or mares and the goal is to improve a filly or mare’s CV by attaining black type status,” he said. “I enjoy the challenge and with fillies I am able to buy at a level not too high and a retired filly or mare who has won a Group or Listed race is worth a truckload more than a retired gelding who has won a Group or Listed Race.”

Clark has an excellent track record with his purchases for the Challenge syndicates with 15 winners and three placegetters from 19 runners and 11 Group and Listed races won. Jennifer Eccles is the fifth individual black type winner from those 19 runners, joining Secret Spirit, Avisto, Fascination Street and Dancer’s Tale.

Clark has concentrated on the National Yearling Sales for his syndicate purchases, but had to take another route for the Challenge No.10 Syndicate in 2017. “I got blown out of the water at the yearling sales so went to the weanling sale at Karaka and bought Jennifer Eccles for the Challenge No.10 Syndicate,” he said. “I’ve only done it once and it has worked out really well.

“I do have a formula for buying. At the top of the list is that they have to be an athlete, then they have to have certain pedigree credentials and a good temperament is really important. “Jennifer Eccles had an amazing temperament and constitution and was a beautiful weanling. She went through an ugly stage as a yearling and was an ugly duckling in the winter, but has developed into a lovely filly.”

The Challenge No.10 Syndicate races both Jennifer Eccles and Cinzento and consists of 57 individual unit holders. “It equates to about 100 people when you take in husbands, wives and partners, so Jennifer Eccles has certainly got a big following each raceday. “They come from all walks of life and from the far north to the deep south. They’re all having so much fun with her and I’m sure there will be a lot of them there on Wednesday. “They’ve not only got Jennifer Eccles in the Lowland Stakes, but also Cinzento in the last race.”

Jennifer Eccles was briefly the first winner for the syndicate when scoring at Hastings last August, but lost the race in the inquiry room. The John Bary-trained Cinzento, a $5000 purchase off gavelhouse.com by Clark, then stepped up to take the honour as the syndicate’s first winner when clearing maiden ranks at Taupo last October. “Cinzento has been a problem child and does a lot wrong,” Clark said. “She over-raced in the Desert Gold Stakes (Group 3, 1600m) last start and pulled up sore, but John is confident she is back to form. “She’s so different from Jennifer Eccles, who has taken it all in her stride and has been very progressive the whole way through.”

Jennifer Eccles highlighted her talent right from her first trial, which she won over 800m at Cambridge 11 months ago. “Jonathan Riddell told us after that first trial she was special,” Clark said. “We had seen it on the track, but the electric acceleration she showed that day was unbelievable.”

The daughter of the stakes-placed four-time winner Platinum Elle has not finished further back than fourth in nine starts and has been four times black-type placed, including a courageous second to Loire in the Group 1 New Zealand 1000 Guineas (1600m) at Riccarton. “She went out to spell after the 1000 Guineas for only 11 days and it was amazing how much condition she put on in that time,” Clark said. “She bounced back.”

Jennifer Eccles cruised home to finally shed her maiden status in the Group 2 Eight Carat Classic (1600m) at Ellerslie on Boxing Day, beating Two Illicit, a leading light for the Group 1 Vodafone New Zealand Derby (2400m) on Saturday. She followed up with a huge finish for third behind Showbeel and Loire in the Desert Gold Stakes at Trentham then was most impressive in the Fillies Classic when turning the tables on the other two Cambridge fillies, both of whom she will meet again on Wednesday in the Lowland Stakes.

“She’s again been plagued with a wide draw (11),” Clark said. “The only two times she has had good draws lately she has won. “She was sharp in her work on Saturday morning, she did it with her usual enthusiasm. What I’m worried about is if the Hastings track gets slow. She doesn’t want it any worse than dead.”

Jennifer Eccles leads the New Zealand Bloodstock Filly of the Year table with 24.5 points and Clark and Ritchie set a goal to win that title. Beyond the New Zealand Oaks there could be a chance the filly has one run in Sydney. “It will all depend on how she goes in the New Zealand Oaks,” Clark said. “If she does go to Sydney it will be for either the Australian Oaks (Group 1, 2400m) on April 11 or the Adrian Knox Stakes (Group 3, 2000m) a week before.”