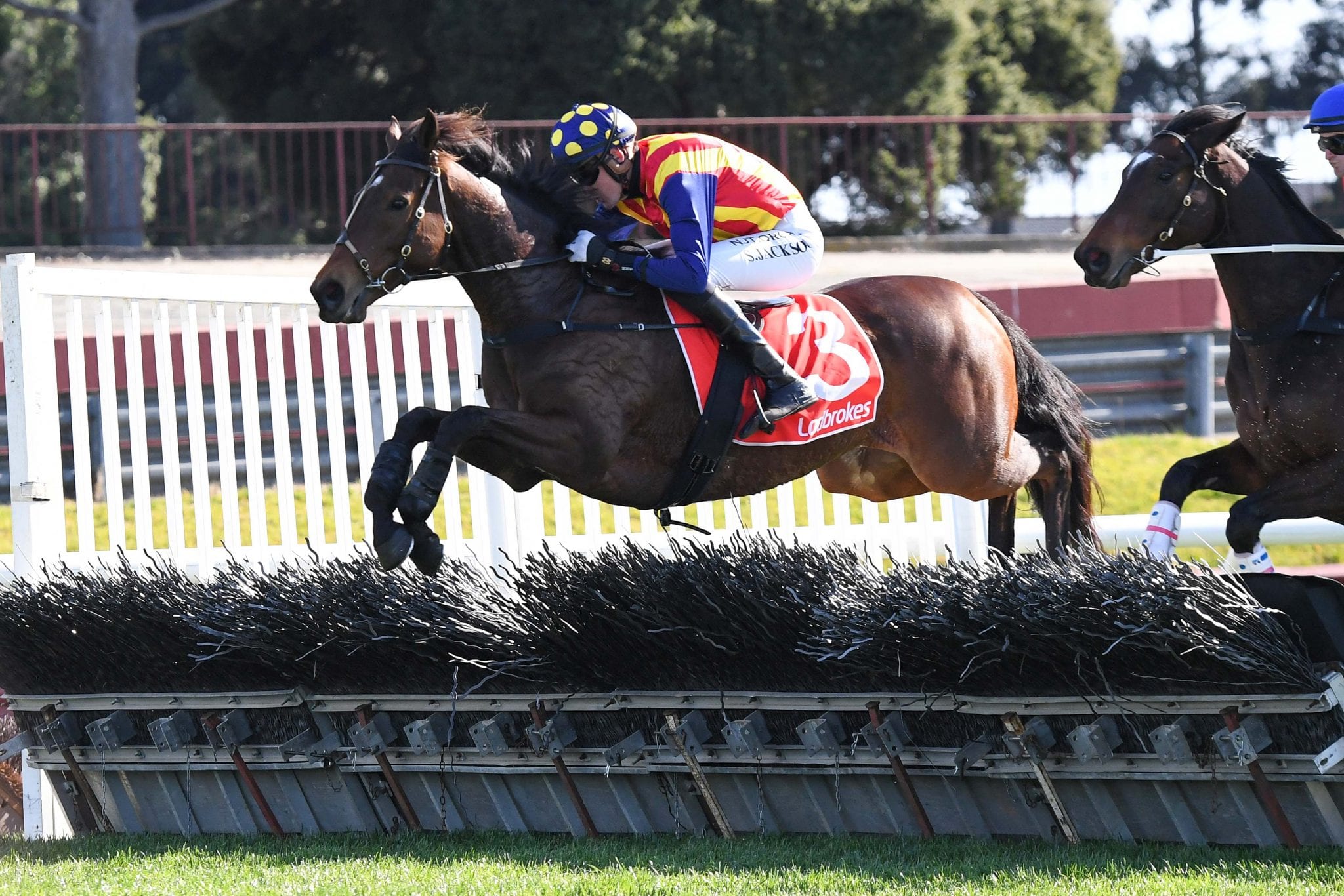 The flag is certainly being flown high by exciting jumper Ablaze for his White Robe Lodge sire and the spinoff is being felt at the leading South Island stud. A son of Raise The Flag, Ablaze extended his unbeaten record to five over fences last Sunday when he completed the double of the Grand Annual Steeplechase (5500m) at Warrnambool and the Grand National Hurdle (4200m) at Sandown and he now chases the Grand National double, being set for the Grand National Steeplechase (4500m) at Ballarat on August 23 by trainers Ciaron Maher and David Eustace.

Added to his Australian record of 11 starts for eight wins is the Jerricho Cup (4600m) at Warrnambool last December and, as his jumps rider Shane Jackson points out,: “He’s won the longest flat race in Australia, the longest steeplechase and the longest distance hurdle race in Australia.” Bred and raced in New Zealand by White Robe Lodge founder Brian Anderton and Mickle Weastell (a granddaughter of the legendary South Island horseman Bill Hazlett), Ablaze won six of his 36 starts and was 10 times placed when trained by Anderton and his son, Shane, before being sold to the Maher-Eustace stable for $40,000.

He had won up to 2200m and raced up to 2400m and Anderton always believed he was an out-and-out stayer who had a future as a jumper. But what he has done since heading across the Tasman midway through last year has exceeded his expectations. He won $91,522 in New Zealand and has now taken his stake earnings to $A742,990. “He’s done us proud,” Anderton said.

“They’ve got him going well and all credit to them. “They were concerned he had a high head carriage and intended to climb a bit in his races so they’ve done a lot of dressage with him. “He has got the opportunities over there. Back here there just wasn’t the staying races for him and he’s bred to go forever with Noble Bijou and Mellay in his bloodlines. “The way it’s turned out with no jumps racing in the South Island this year and lack of good staying races he would have been wasted here.”

Riding High and Flying Agent are other former Anderton stablemates and sons of Raise The Flag who have performed well in Australia. Riding High won two of his 18 starts in New Zealand and since being sold for $30,000 he has gone on to win a couple of 2000m flat races before scoring a double over hurdles at Pakenham and Warrnambool earlier this year.

In the latter win Flying Agent, a two-race winner for the Andertons, finished third for trainer Amy McDonald (who races him on lease with his New Zealand owners). Flying Agent then went on to win his second hurdles race, at Sandown last May in his next start, and was switched to steeplechasing and in three starts has recorded two wins and a second.

“It’s a wee bit of a feather in our cap that we’ve sent them all over there and they all jump well,” Anderton said. “The downside is the two years we put in to get them to that stage and have to let them go to give them the best opportunities. “But it has been a good result for Raise The Flag. The trainers that have got them over there love them. “The unbelievable part is that some of them and other different owners, too, have bought six mares off gavelhouse.com and sent them to Raise The Flag. “They want more of them and are obviously prepared to wait. The Raise The Flags need time and it’s being proven.”

Sollevare, another son of Raise The Flag, has been trained throughout in Australia and since being tried as a jumper he has won, at Pakenham last month, and ran fourth to Ablaze last start in Grand National Hurdle.

Raise The Flag has sired 21 winners of 32 races this year and last autumn Etah James provided his biggest highlight on the flat when taking the Group 1 Sydney Cup (3200m) at Randwick for Maher and Eustace. “We’ve just sold another two Raise The Flags to go to Australia,” Anderton said. “It’s a way of staying afloat and with not enough suitable staying races and no jumps racing down here for now it’s the best option.

“We’ve actually sent Londonderry Air (by Raise The Flag) up north to Mark Oulaghan at Awapuni to train for us. “We haven’t raced him over fences, but, like the others, we know he jumps well as Mark has found out. “We might be sending another one north, too.” Londonderry Air has won six races up to 2200m and has been freshened since his last start at Riccarton in late June.

Jumps racing in the South Island has become more and more reliant on northern jumps jockeys flying south to prop up the riders’ ranks and the Andertons were set to play their part to help out until COVID-19 ruined their plans. “We had a boy, an amateur rider, coming over from England,” Anderton said. “He was recommended to us by the top jumps trainer over there and was set to come until COVID- 19 stopped everything. “We need more jumps jockeys down here to help jumps racing survive.”

With the jumps focus being on Australia and the North Island for Anderton this year, there’s also interest closer to home for his stable with 18 horses accepted for Friday’s local meeting at Wingatui. “We’ve got a big team in, but it’s hard to set some of them for the races they should be in with the open entry system,” Anderton said. “It’s taken the placing of the horses out of the trainers’ hands.”

The Anderton line-up includes Raise You Ten, who found it hard in very testing ground under the impost of 62.5kg at Invercargill last start, but battled well for fourth. On Friday he will be aided in the Rating 86 1200m by a 2kg claim from apprentice Kavish Chowdhoory, who will reduce his weight to 60kg.