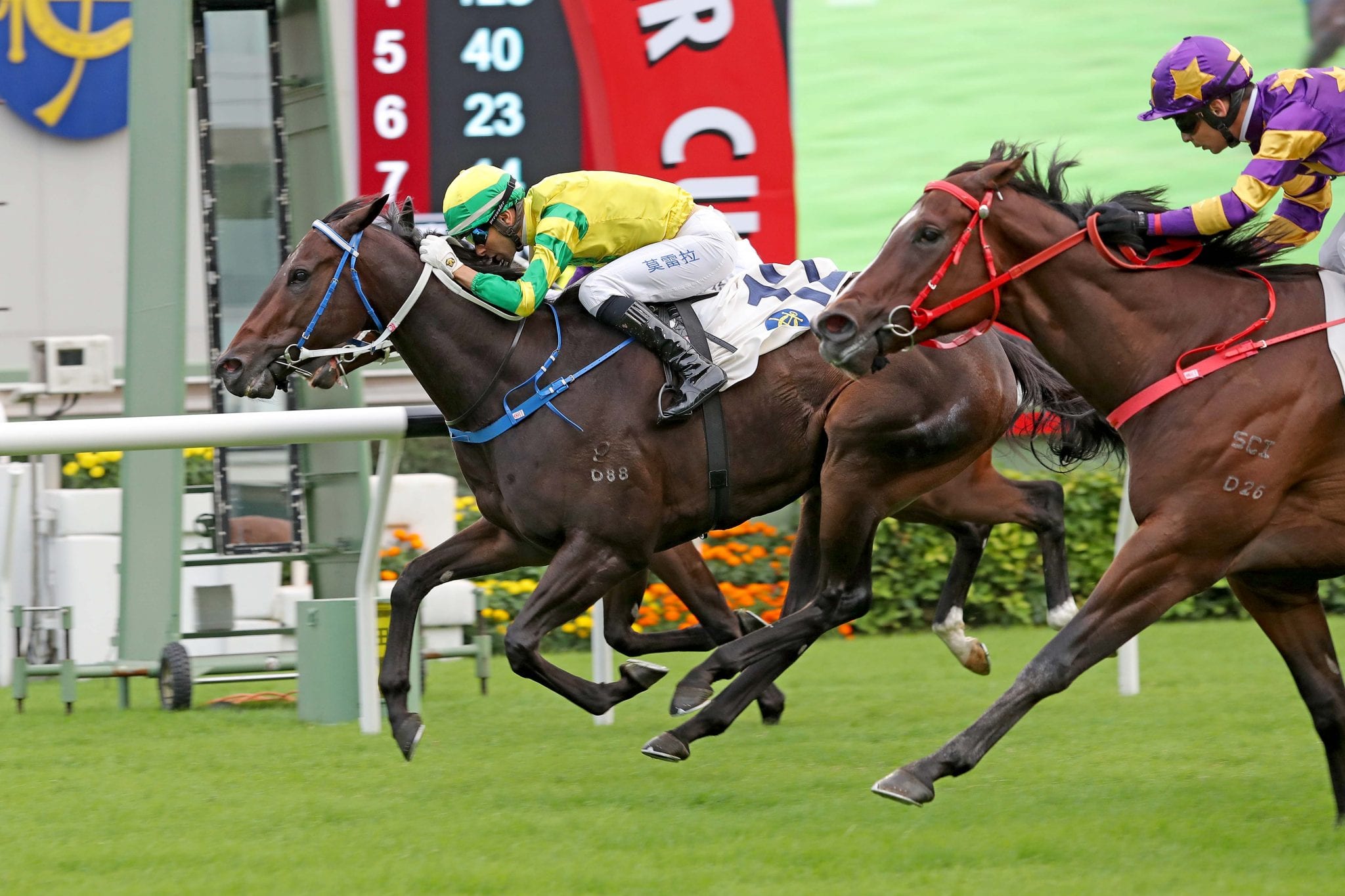 Caspar Fownes could have the strongest hand of any trainer in January’s Hong Kong Classic Mile as smart four-year-olds Sky Darci and Enrich Delight came to the fore at Sha Tin yesterday afternoon (Sunday, 29 November).

Sky Darci made a big statement with victory in the Class 1 Chevalier Cup Handicap (1600m), the day’s feature, and he did so at his first try in the grade following two Class 3 successes over 1200m at the city circuit.

“He was held up at a crucial stage of the race when everyone else had momentum, it’s tough to do what he did today – it’s gutsy,” Fownes said. “He did it because he wants to do it, he’s got a bit of spunk about him.”

The Darci Brahma gelding successfully made his first attempt at the mile a winning one and he did it in style, with a gritty triumph to maintain his unbeaten sequence this term as the HK$12 million first leg of the three-race age restricted series beckons on 24 January, 2021.

“He’ll have a bit of a freshen up now, he’s done very well – I’ll look at the program, whether he has one run before the Classic Mile or not I’ll decide later but right now he’s done a great job for us and I’m very happy for the owners,” Fownes said.

The talented four-year-old has gone from strength-to-strength this term and today handled an 11-point rating rise to win and now could find himself stamped with a triple figure rating.

“I felt the horse had got it well within his compass to go to the mile and even further, because what he was doing at Happy Valley he was just doing on his raw ability,” Fownes said.

“It’s pretty tough to go straight from a Class 3 to a Class 1 but I just felt we had the right horse to give us the chance to do it – up in class but down in weight and a horse that is in really top form so you have to take a chance.

“Especially considering it is his four-year-old year and you hope that they’re good enough to mix it with those type of horses and now he’s proven that he can, so he’s certainly earned his way in the Four-Year-Old Classic Series now,” Fownes said.

Joao Moreira settled the New Zealand-bred on the rail close to the speed, a hapless run in the straight followed before he knuckled down under the Brazilian’s urgings for a narrow score ahead of fellow Classic Series prospect, Lucky Express (115lb).

“He gave me the feel that he could do it when he won last start at Happy Valley – he has a high enough rating to go into the Four-Year-Old Classic Series with the reputation of being a nice horse, he’s no doubt going to go there with a good winning chance,” Moreira said.

Fownes drew comparisons to Green Birdie, who won the Hong Kong Derby Trial in 2008 over 1800m, the race now known as the Hong Kong Classic Cup and is the second-leg of the series.

“We’ve had a great season so far with him (Sky Darci) it looked to be quite strong through the line – I won the Classic Cup over 1800 metres with a sprinter in Green Birdie and this guy has much better staying ability than him,” Fownes said.

“When you’re at your four-year-old year you can get away with certain things because you’re up against the same age group,” he added.

Fownes’ day would only get better in the finale as the ex-Godolphin owned Enrich Delight, known as Chenier prior to export, would notch a dazzling win in the finale, the Class 2 Chevalier Property Investment Handicap (1400m) to seal a treble for Moreira, but it was no revelation to the handler.

“I’m not surprised at all – I told Joao (Moreira) a while back – I said ‘I think this horse could be pretty special’,“ Fownes said “I’m not riding them but I can get a good feel for horses from training good horses for years and I said to him, ‘This one you want to be riding – he’s pretty smart’.”

The youngster placed at Group 3 level in Australia and finished fourth in the Group 1 Australian Guineas (1600m) at Flemington Racecourse under the care of Anthony Freedman.

“He’s done it very professionally in a good style – he got into trouble in the home straight and horses were dropping quickly back into his face,” Moreira said.

“I went for a run and the gaps started closing and he got interrupted and didn’t have a smooth run, but when he saw daylight he really dashed home and showed he has a lot ability and as Caspar described: he is the real deal.”

Class 2 on debut is no easy feat, especially against a quality field which also saw the high-profile debuts of Tourbillon Diamond (124lb), who was Group 1-placed in Australia as Eric The Eel and finished third, while two-time Australian Group 1 winner Shadow Hero (130lb), who was slow out – finished a luckless seventh.

“First-up to do that – if he had got clear at the 200 metre mark he would have (won) in a canter, there’s not many that excite me, but he’s exciting,” Fownes said.

Fownes, with a strong grip on the Classic Mile, is hopeful of the Medaglia d’Oro gelding’s ability to see out a strong 2000m of the BMW Hong Kong Derby in March, 2021.

“If he can run 2000m its going to be really exciting, but to do that over 1400 metres first-up, obviously the second run in a couple of weeks’ time will be good then he can sort of take a chill pill and go to the 24th of January for the start of the Classic Series,” Fownes said.

Fownes also confirmed that fellow talented four-year-old Sky Field and The Everest winner Classique Legend will both trial on Tuesday over 1000m on the turf at Sha Tin.

“He (Sky Field) is going to trial down the 1000m with Classique Legend on Tuesday and if he trials well and is strong through the line then he’ll go to the 1200 metres on December 13,” Fownes said.

The David Hayes-trained Super Axiom raced clear to a comfortable two-length win on debut in the Class 4 Chevalier Aluminium Engineering Handicap (1000m) to justify favouritism after a trio of strong trials leading up.

The talented son of Exceed And Excel broke cleanly under Chad Schofield, who rolled across from gate three to find the stand-side rail and an uncontested lead.

“He goes well – he’s shown a lot of ability since he came and I’m lucky enough that David (Hayes) gave him to me to ride, I’ve ridden him nearly every morning,” Schofield said.

“We thought he had a very good chance today and it was nice to see him do it – he’s got a lot to learn but he’s an exciting horse going forward,” Schofield.

Hayes’ young stable has been on show of late as his most recent winner Harmony N Blessed was also a debutant who signaled a bright future with an easy two-length debut win just seven days ago.

Piccone gets off the mark

Frenchman Tony Piccone landed the first win of his second Hong Kong stint as Team Spirit toughed it out in front for an all-the-way win in the Class 3 Chevalier Lifts & Escalators Handicap (1200m).

“It took a little bit long but I am very happy, the horse was very good – I won on him last season and I’m very happy,” Piccone said.

The 33-year-old got off the mark at his 59th ride of season 2020/21, but he had gone close with three runner-up efforts prior, and takes his overall total to nine in Hong Kong.