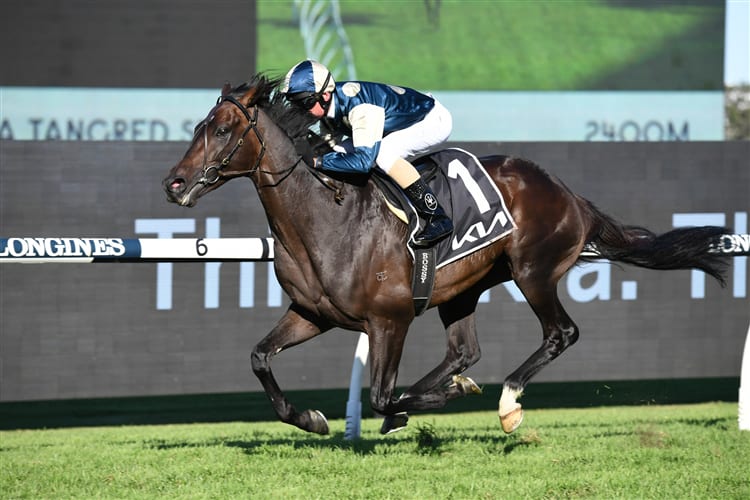 Sir Dragonet has been given a push by jockey Glen Boss on Tuesday morning ahead of the Queen Elizabeth Stakes on day two of The Championships.

Following a dominant victory in the Group 1 Tancred Stakes, Boss is understandably bullish regarding Sir Dragonet who on Tuesday morning drew barrier 2 for Saturday’s feature event.

Much of the focus leading into the Queen Elizabeth Stakes surrounds the matchup between English Raider Addeybb and Chris Waller-trained mare Verry Elleegant.

But when speaking after the barrier draw, Boss said his mount’s bloodlines alone are enough to show Sir Dragonet can beat his rivals.

“Well if anyone wants to go and spend 10 minutes and have a look at this bloke’s pedigree, that’s enough to sway you,” Boss said.

“He’s probably got one of the best pedigrees of any European that’s come to Australia. You’ve just got to go back and look at it, and you just get in shock of how much of a good pedigree he’s got.

“There’s no fluke that he’s here and he’s winning Cox Plate’s and the Tancred.”

Sir Dragonet had earlier completed his final track gallop alongside the Matthew Smith-trained Grey Lion at Sky Racing’s Trackwork With The Stars event.

The 2020 Cox Plate winner recorded the fastest last 600 metre sectional of the morning.

When asked his thoughts on Sir Dragonet’s work this morning, Boss was more than satisfied with how the Camelot entire is travelling leading into Saturday’s $4 million feature.

“He went out there to have a nice gallop and he’s pulled up very good. I was very happy with the way he went about his business this morning, he seems in good control of himself, his fitness levels, well you can’t get him any fitter,” he told Sky Racing.

“I said to Ciaron (Maher) this morning, I just feel like his mind is in a great place at the moment, he feels very competitive.

“I just think he’s definitely coming good at the pointy end of the preparation, which is obviously the major, so I’m really excited about what’s going to happen on the weekend.”

Co-trainer Ciaron Maher was also happy with the multiple Group 1 winners’ work this morning, saying it has improved as the preparation has unfolded.

“Just the deeper [he goes into] the preparation, the more pleased I’ve been with him. With each run and each piece of work, I get more confident.”

“He obviously turned in a nice piece of work today and Glen (Boss) was pretty happy, and he’s drawn pretty well.”

The Maher and Eustace team also have Southern France running in the Group 1 Sydney Cup on Saturday.

The six-year-old son of Galileo drew barrier five for the 3200 metre event, with Maher believing the gelding will take a liking to the genuine staying journey.

“I was very happy with him heading into the Tancred and the race just didn’t map that well for him,” Maher said.

“I thought he got through the line well and he’s come out of that race really well. Two miles would be more to his liking and here at Randwick also.”

Sir Dragonet is currently on the third line of betting as a +550 chance for the Queen Elizabeth Stakes on Saturday while Southern France is equal second-favourite at +700 for the Sydney Cup.