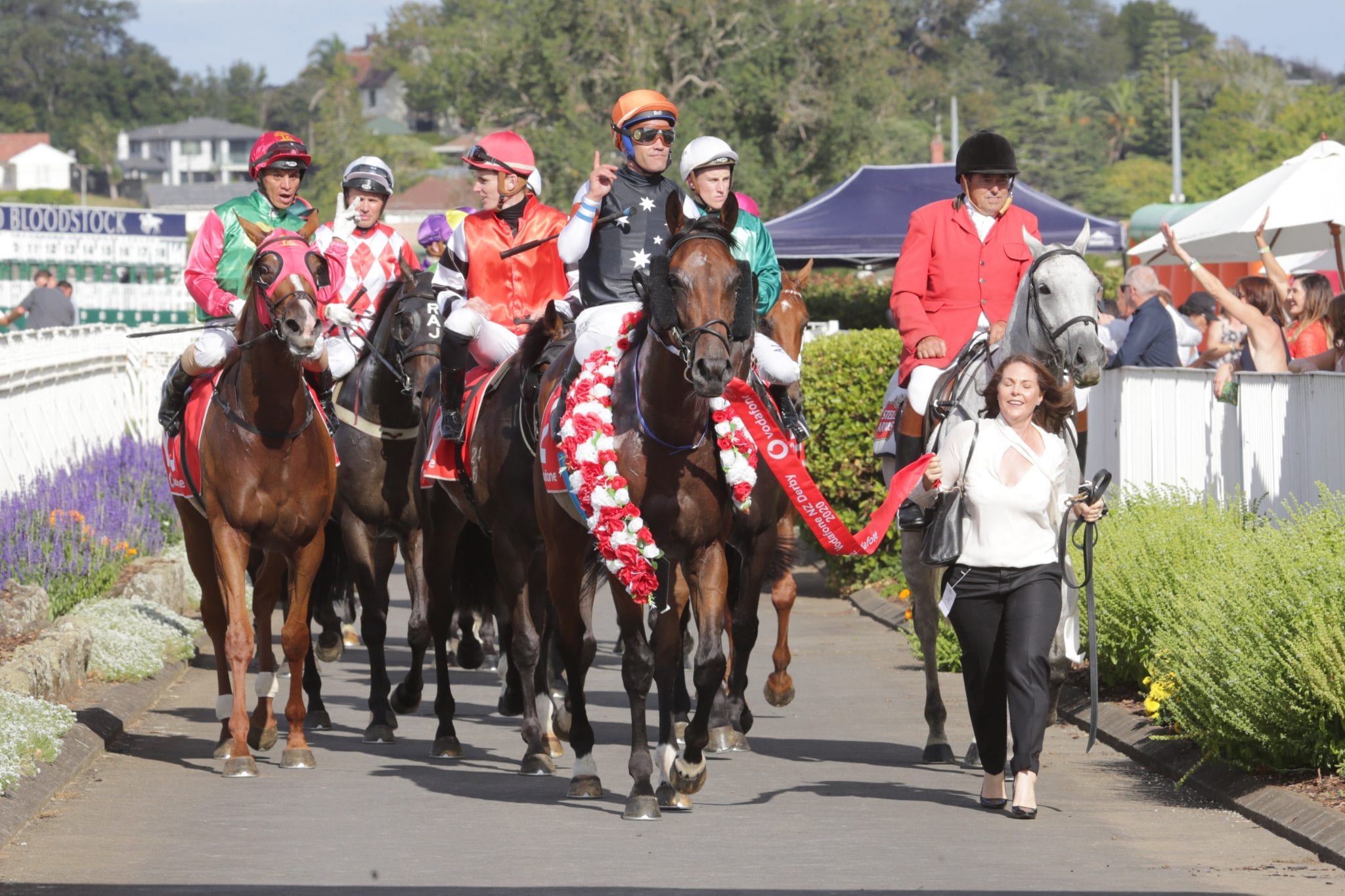 Cambridge gelding Sherwood Forest tore up the script of a two-horse race and powered to an upset victory in Saturday’s Group 1 Vodafone New Zealand Derby (2400m) at Ellerslie.

After dominant performances by Two Illicit in the Group 2 Waikato Guineas (2000m) and Dragon Leap in the Group 2 Avondale Guineas (2100m) leading into the $1 million classic, all eyes were on that pair in what was billed as a possible match race.

The blue-blooded gelding and the X-factor filly took turns holding favouritism around the $2.50 mark during the week, with no other runner in single figures. Lurking at $13 was Sherwood Forest.

A placegetter in the Group 1 New Zealand 2000 Guineas (1600m) in the spring, his trainer Tony Pike had the utmost confidence in the son of Fastnet Rock’s stamina. Over a truly run 2400 metres, Pike believed he had the horse to outstay most of the Derby field. Pike was exactly right.

In the fastest New Zealand Derby since So Casual clocked 2:24.8 in 1998, it was Sherwood Forest who stood strongest of all. Ridden by star Melbourne-based Kiwi jockey Michael Walker, Sherwood Forest settled in fourth place as Peloton, Red Rufus and Vladivostok set up a strong tempo out in front.

The intensity went up a notch coming down the side of the track as Vinnie Colgan made his move on Two Illicit, with Jason Waddell following him every step of the way on Dragon Leap. That pair strode to the front together at the top of the straight, and the predicted two-horse war looked like it was about to unfold. But Sherwood Forest was in between that pair, and over the last 300 metres he found something that they were unable to match.

Two Illicit gave her all to try to stay alongside him, but Sherwood Forest edged clear and crossed the finish line a length and a quarter ahead, stopping the clock at 2:26.77. Scorpz charged home from fifth-last to edge out Dragon Leap for third, finishing two lengths adrift of Two Illicit.

It was a third Derby win for Walker, following Military Move in 2010 and Puccini in 2014, and a second for Pike after Rangipo in 2016. “He just outstayed them,” Pike said. “The last few races he’s been running in have been a little bit too sharp for him, but I’ve always thought he would come into his own over 2400 metres. It’s a fantastic result and hugely satisfying.

“He was a bit of a ratbag as a two-year-old, but the team have put in a lot of work with him, and this season was always going to be about the Derby. It’s great when a plan comes off. “It was a beautiful ride. We wanted it to be a true staying test. He presented him at the right time, and the horse showed what a genuine stayer he is.”

Pike said a decision had yet to be made on the remainder of Sherwood Forest’s season, but a shot at the Group 1 Australian Derby (2400m) on April 4 was now likely.

Saturday’s win continued a remarkable month for Walker, whose horror recent history of injuries had threatened to end his riding career. Instead he is back doing what he does best, having also won last Saturday’s Group 1 Blue Diamond (1200m) at Caulfield on the Trent Busuttin and Natalie Young-trained Tagaloa.

“Five weeks ago I was going to give it away,” Walker said. “I was too heavy and getting sick of all the injuries. I’ve had 13 operations on my left hip, including a hip replacement. “But I decided to stick with it, and I’ve been very fortunate to have these results. I’m really grateful for the opportunity to come home and ride this horse. He gave me an amazing ride. He’s such a gentleman, and everything I asked for, he gave.

“The two favourites have such brilliance, but if there was a chink in their armour, it was going to be the distance. You have to be the best staying horse to win this race, and Tony gave me confidence that I was riding that horse. “When he got away from them in the straight, he actually pulled himself up a little bit. I might not go so soon on him, if I get the opportunity to ride him again.

“I have to rush off and catch a plane back now, so I can’t stick around for the celebrations. But seeing the connections’ smiling faces when I came back off the track was an awesome thrill. It’s why I keep doing this.”

Raced by his breeders Goodson & Perron Family Trust in partnership with Calder Bloodstock Ltd and Deborah Martin, Sherwood Forest has won four of his 11 starts and more than $737,000 in stakes.