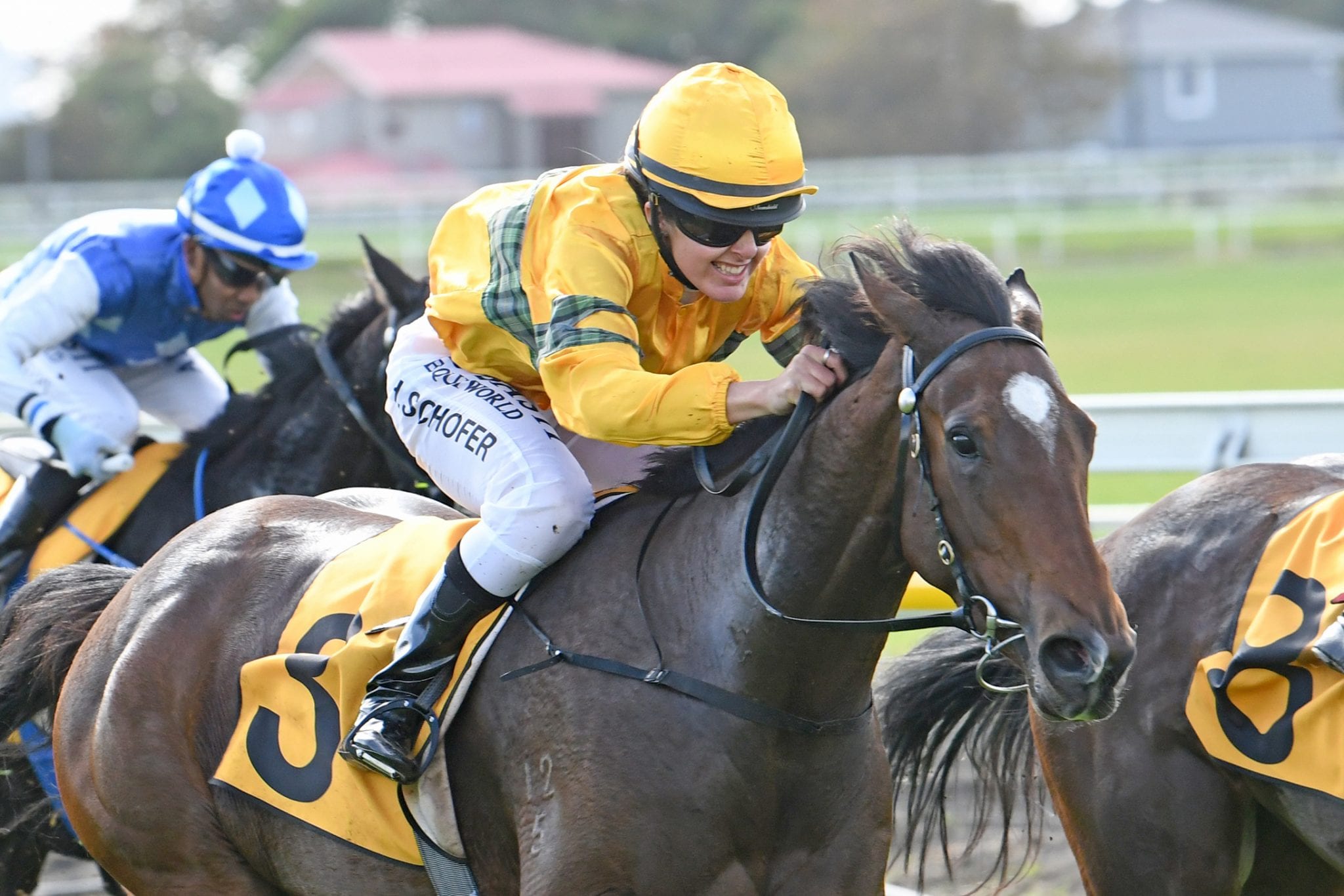 Twenty-year-old apprentice jockey Hazel Schofer will have fond memories of her raceday debut after kicking home a pair of winners on her home track at New Plymouth on Saturday.

Indentured to local trainer Allan Sharrock, the softly spoken Schofer produced a confident display aboard Tavi Mac to record her inaugural win at just her first ride on a raceday before bringing up a double when scoring on Collinstreet in the last race of the day.

In between times she finished second on class mare Art Deco and impressed Sharrock with the level of maturity she displayed throughout the day. “She’s a lovely lass who has a big future ahead of her,” Sharrock said. “She’s not a natural lightweight but she is nice and strong and has good balance. “I was impressed with the way she conducted herself during the day, which is half the battle sometimes and I’m sure she will take plenty away from the experience. “She is a terrific listener who thinks about what she is doing so she should be very satisfied with how the day went and what she achieved.”

Sharrock has full belief in his apprentice which was clearly shown by giving her four rides on stable runners during the day. “You have got to have confidence in them and show that by giving them the rides,” he said. “I thought she was up to the task and the reality is they can only learn and get better if they are riding. “The horse she won on in race two (Tavi Mac) is an awkward customer and she didn’t look that pretty on him but she got the job done. He was a bit of a rogue in the gates but she handled that well and put him in the race at the right time. “I was very proud of the way she handled Collinstreet in the last as she got in a tough spot where most kids would have let them drift out. She gave him a couple of backhanders to get him up and travelling and that probably won her the race.”

A New Plymouth local, Schofer started her career with trainer Ilone Kelly and moved to Levin when Kelly transferred her stable to a new base there. After a brief stint in Levin she returned to New Plymouth and made her way to Sharrock’s stable just on a year ago. “She grew up riding ponies, so she had a good grounding with horses from when she was little,” Sharrock said. “She started off in racing with Ilone and went with her to Levin, but I think she missed her family and friends, so she came back home. “She has been with me for just on 12 months and has made very good progress. “We aren’t going to rush things for her, but this is the best time of the year for an apprentice to get started as there are a number of opportunities available with their claims. “We will keep her to our stable horses until she loses her 4kg claim which might not take that long based on what she achieved on Saturday.”

Schofer was quick to thank her mentor and members of the Sharrock family when interviewed after her first win. “I’d like to thank Allan, Emma and Kane as well as they all give me so much help with my riding and give me lots of opportunities,” she said. “Mum’s here somewhere and my grandparents, it’s really good.”