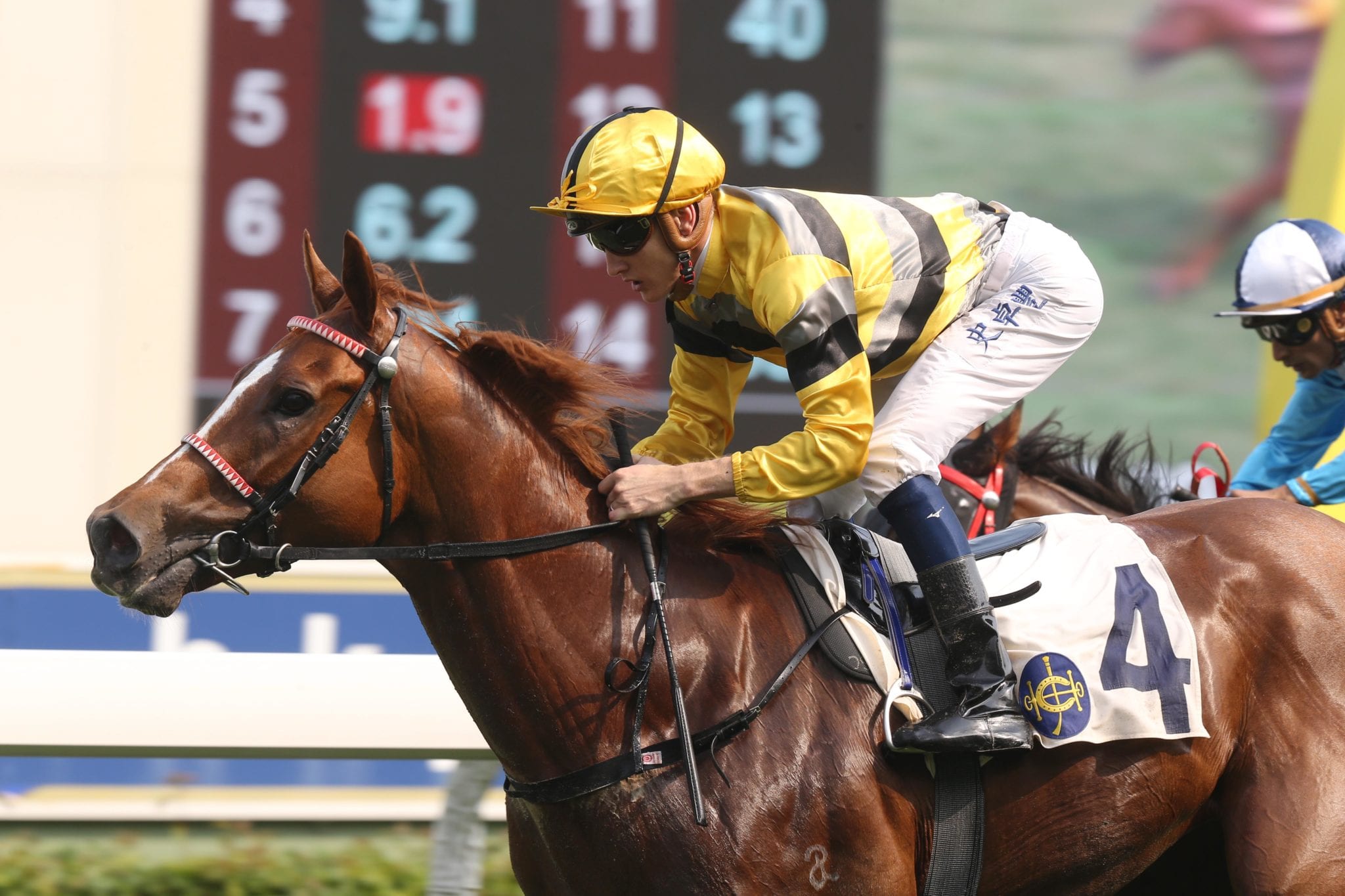 Chad Schofield is well on his way to smashing his personal best Hong Kong tally after maintaining an excellent run of recent form with a treble at Sha Tin yesterday, Sunday, 19 April.

The rider has registered a tally in the thirties in each of his four previous Hong Kong campaigns and this afternoon’s three-timer took him to 34 for the term, just four shy of his best ever 38, with 24 fixtures remaining.

“I’ve had a nice run for about two months now, it’s been nice and consistent and to get another treble is good – and for three different trainers too. I hope it can keep going,” Schofield said.

The South African, who spent much of his childhood and youth in Hong Kong and Australia, has now registered at least one win at each of the past eight Hong Kong race meetings.

His second three-timer of the year kicked off in the opener, the Class 5 Waterloo Handicap (1650m), with the Jimmy Ting-trained Wonder Express. He followed that with a determined front-running score atop Super Power Man for trainer Manfred Man in the Class 4 Kent Handicap (1400m, dirt).

Schofield wrapped up his trio one race later on the Ricky Yiu-trained Team Power. The inexperienced four-year-old overcame a bit of buffeting at the top of the straight to earn a breakthrough win at his fourth start.

“The pace wasn’t good and the field was very bunched,” Schofield explained. “I had one of the main dangers, Telecom Rocket, there on my outside and because they were bunched I needed to make some room, I tried to get him out but then a run opened up on the inside and I went back in. He’s a nice young horse.”

Joao Moreira earned a gasp of breathing space in his tight tussle with Purton for the champion jockey title. The Brazilian collected his own three-timer to take his running total to 104 as his rival’s sole win on Mighty Giant took him to 101.

“If I can keep on winning races like today I’ll be extremely happy,” he said.

Moreira completed his treble aboard the improving Danny Shum-trained four-year-old Fantasy. The 1.6 favourite powered over the top of the front-running Team Spirit to score by half a length.

“He’s a young horse and he’s going forward every time he goes out there to race. Danny said to me before the race that he’d put on better condition this time and he was 100 percent right. It’s a great training effort,” Moreira said.

The three-time Hong Kong champion jockey was off the mark early, driving the Caspar Fownes-trained Defining Moment to success in the Class 4 Suffolk Handicap (1800m). He then ensured that the 1.8 favourite Foodie Princess made it three wins from his last four starts in the Class 3 Essex Handicap (1650m).

Trainer Chris So revealed that Moreira’s feedback had been important in nailing this latest success.

“After he was second last time Joao suggested the horse is better at 1650 metres than 1800 metres so this time he went for the mile and he’s a very good dirt horse. When he won in Class 4 he was already clocking Class 3 times. In early May there’s another Class 3 1650m on the dirt, so we’ll aim him at that.”

The Frenchman kicked off his contract seven days ago with a double on the Sha Tin turf, bagged his first Happy Valley success mid-week and this latest win proved the Sha Tin dirt track to be no problem either.

Dylan Mo enjoyed a sweet passage on the front-running Winner Supreme from gate 12 in the Class 2 Cornwall Handicap (1200m). The rider was about four lengths clear and already halfway down the home straight before he shook the reins and began to push on the talented Me Tsui-trained galloper. The four-year-old secured his fifth career win by two lengths in a track record time of 1m 07.27s.