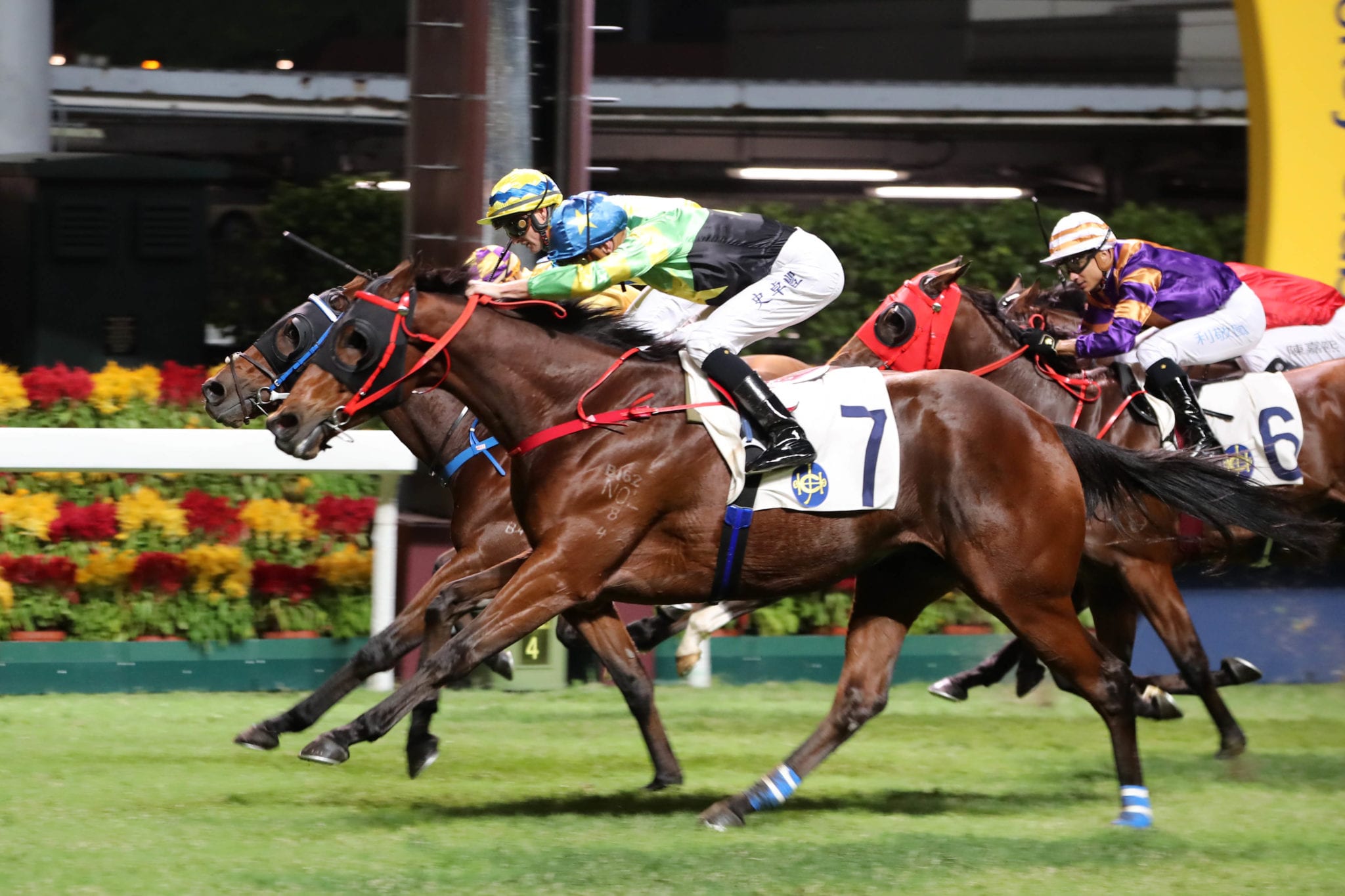 The Frankie Lor-trained five-year-old backed up a last start win under the rider with a dramatic late lunge to edge out Tangmere (133lb) and Electric Lightning (122lb) in a three-way tussle to the wire.

“He had the run of the race but he worried me around the turn because he dropped the bridle and he wasn’t going anywhere,” Schofield said.

“He didn’t corner all that well and Tangmere was able to slip through – I kept him balanced and was hoping, waiting for him to swap onto his correct leg and he didn’t but he came back late and got the win.”

Aurora Pegasus succeeded on the back-up too. The Caspar Fownes-trained galloper clearly learned a fair bit from his last start win and put that into play with an accomplished stretch run that carried him to a cosy length and a quarter score in the Class 4 Tiu Yue Yung Handicap (1200m).

That sealed a double for Zac Purton, on the mark earlier when Amazing Luck (133lb) came out best in a ding-dong battle with Flame Lily (125lb) and Casa De Forca (130lb) for section one of the Class 4 Tsim Mei Fung Handicap (1650m). The champion jockey dished out a power-packed drive to ensure the five-year-old earned a breakthrough win at his 10th Hong Kong start.

The Joao Moreira and John Size double act struck again when Hong Kong Win led from start to finish in the 1000m dash for the Class 4 Tin Ha Shan Handicap. The Mossman four-year-old, the 5.2 joint-favourite, claimed the spoils for the first time at his fifth outing.

It was almost a year between drinks but Grant van Niekerk steered home his second winner for trainer David Ferraris, the HKJC Racing Club-owned Young Glory in the the Class 5 Wa Mei Shan Handicap (2200m). The South African pair had teamed up only once this term prior to tonight.

Ferraris bagged a double for the first time since 10 June, 2018 when Rispoli succeeded in getting Xiang Bai Qi’s (119lb) head in front for the first time in 20 Hong Kong starts. The five-year-old burst through a gap deep in the home run and held the Purton-ridden 2.1 favourite Chefano (130lb) by half a length in the Class 3 Shek Uk Shan Handicap (1800m).