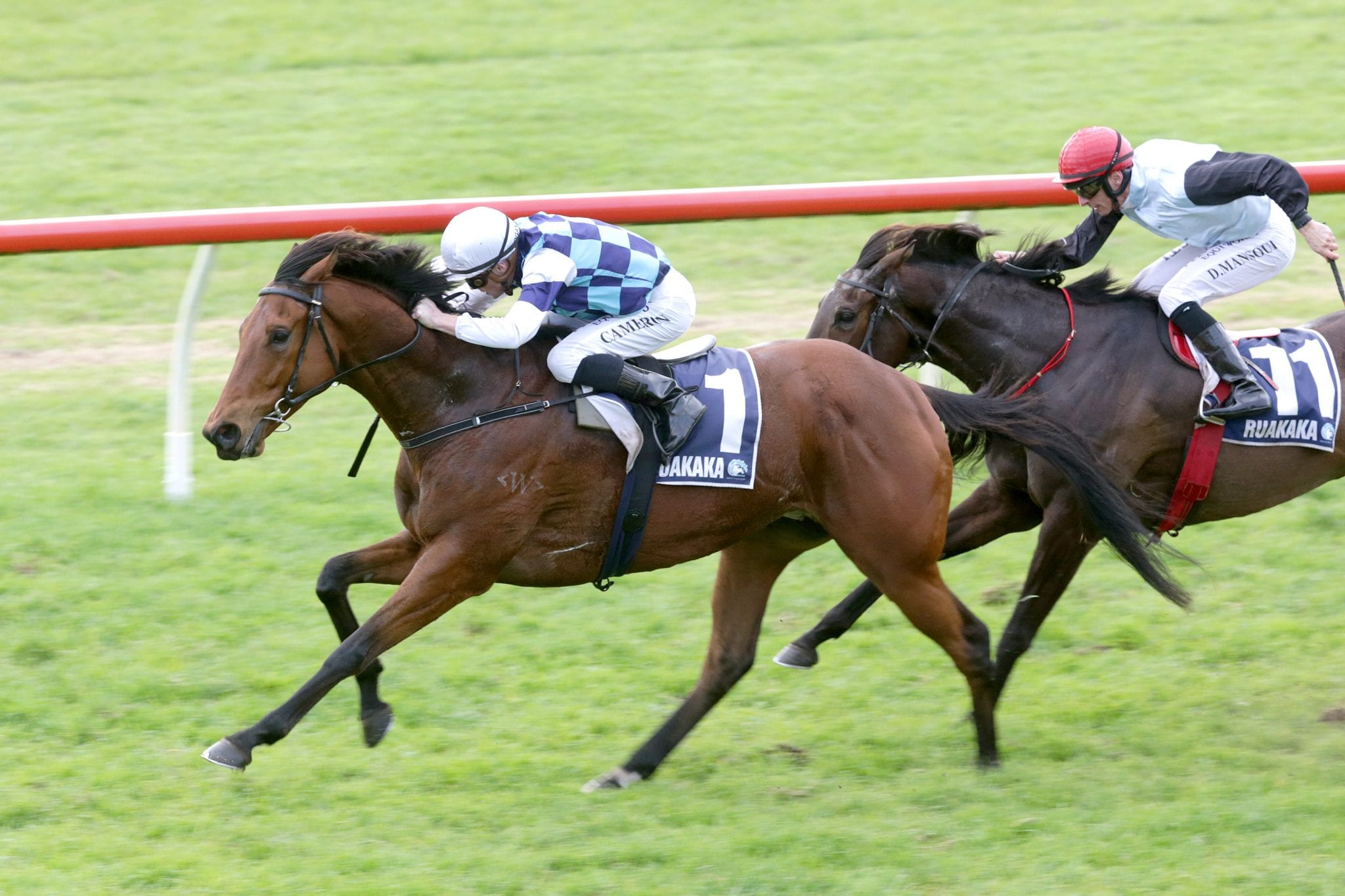 Offshore interest in promising galloper Mac Attacka was piqued yet again on Saturday after the impressive three-year-old produced a powerful closing burst to take out the last race on the card at Ruakaka. The Makfi gelding had impressed many when winning two of his first three starts which led to his potential sale to Hong Kong interests. Despite passing the vetting requirements for the sale, the deal fell through which led to Saturday’s reappearance over 1600m and another eye-catching victory.

Settled near last by rider Matt Cameron, Mac Attacka was still well back approaching the home turn as Cameron eased him to the outside to make his challenge. Several huge bounds carried him to the front inside the last 200m as he drove clear to score by a widening three-quarter length margin. “I think that was his best win to date,” co-trainer Chris Gibbs said. “He beat a handy field and did it like a horse who had plenty up his sleeve. “With all the activity going on with the sale and what not, we hadn’t done too much with him, but when that fell through, we decided to run him and he did the job for us.”

Despite believing the horse has the ability to compete at a higher level, Gibbs isn’t looking too far ahead as further expressions of interest in purchasing him came in overnight. “It’s no secret he is for sale and the phone was ringing again last night,” Gibbs said. “A performance like that will certainly get people interested so we’re not really in a position to plan out a campaign for him as he could be gone just as quickly. “Obviously if he stays with us, we will be looking at some of the better spring and summer races but at this stage I can’t really say what is going to happen.”

The Gibbs/Bradley combination was in the thick of the action throughout the day on their home turf, taking out the opening event with two-year-old debutant Annie’s Song as well as producing Poker Face to win the day’s feature race, the ITM/GIB Whangarei Gold Cup (2100m).

In between times they also narrowly missed making it four wins for the day when promising stayer Amazing Az was beaten by a nose over 1600m. “It was a really good day and we won with horses who have bright futures ahead of them,” Gibbs said. “Poker Face has really come into his own now he has stepped up over some ground. “I actually thought he might be a little out-gunned at the weights but he ended up winning comfortably. “He may have found his niche over ground so I think we will probably back off him a little and look to races like the Waikato Cup (Group 3, 2400m) or Counties Cup (Group 3, 2100m) later this year. “Those are the types of races that Amazing Az could contest as well so we may have a job on our hands trying to keep them apart.

“Annie’s Song was very impressive and will only get better as she steps up in distance. “I really like her and a race like the Northland Breeders’ Stakes (Group 3, 1200m) back here in September is one we will be keen to see her contest.”