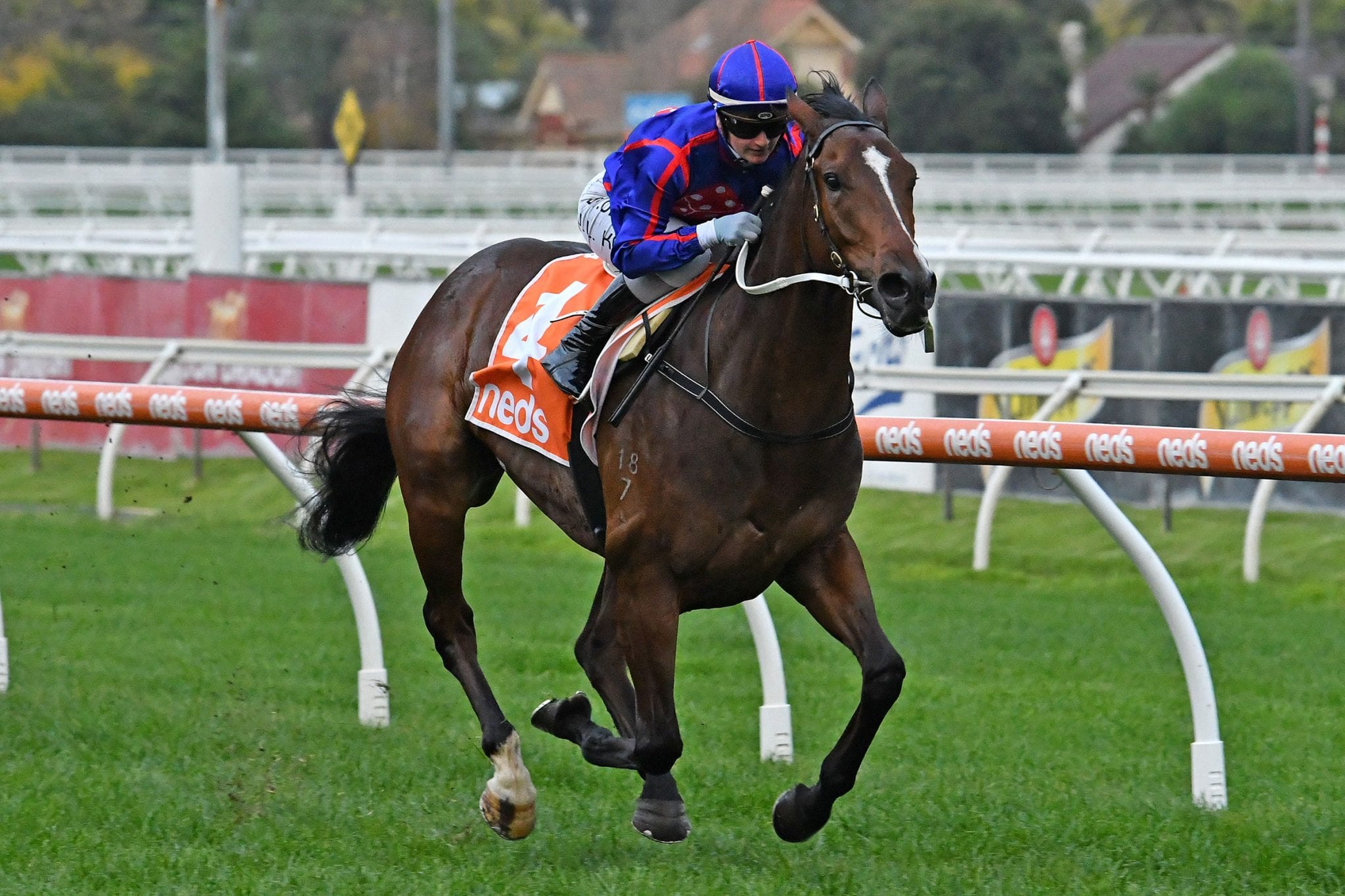 Promising three-year-old Ayrton is one of the talk horses of Australian racing, with an unblemished three from three record.

In his short body of work, the Mick Price and Michael Kent Jnr-trained son of Iffraaj has ratings experts fizzing, with many labelling last Saturday’s impressive Caulfield victor a Group One winner in waiting.

The progressive gelding made his way to the Price-Kent yard care of a deal negotiated by Kiwi bloodstock agent Phill Cataldo, who was quick to identify the raw talent from the barn of top Cambridge horsewoman Lauren Brennan.

Bred and raced by Cambridge accountant Greg McCarthy, Ayrton, or the unnamed Iffraaj gelding as he was known at the time, finished second in his only trial at Te Teko in October last year.

A narrow runner-up to Cornflower Blue, who had already shown her hand as a talent with a second placing on raceday debut behind quality galloper Need I Say More, Cataldo knew the gelding had good ability.

“I had seen him at the track in Cambridge in the mornings but doing the form the day before the trial, Cornflower Blue looked well above average and she had had a couple of trials and a race at that stage,” Cataldo recalled.

“She looked way above average and they were in the same heat, Ayrton was having his first trial and ran her to a nose.

“So that was a flag, you knew then that the form from that trial was going to be good, he was so raw and untapped. He was a pretty obvious one really.

“It comes down to who owns the horse as to whether it is going to be buyable.

“Greg McCarthy owned the horse and I knew him quite well. He didn’t want him going to Hong Kong. He wanted him to go to Australia and his preference was Mick Price.

“That made it easier and he wanted to stay in. The fact I have a relationship with Mick and Michael Kent Jnr, it was a really good fit all round.”

The astute agent said there was definitely a trend of New Zealand owners happy to stay in for a share, as McCarthy has with Ayrton.

“With the prize money on offer in Australia it is the best of both worlds. They get money upfront and retain ownership and get the thrill and excitement of racing a horse in Australia,” he said.

Ayrton’s trial was one of nine heats over 825m at Te Teko that day, but it wasn’t a case of smashing the clock, with the 49.89 seconds recorded the fifth fastest of the nine.

“I find the buyers will look at the videos for sure, but they can’t see the horse in the flesh so they rely on me for that. If they run a fast time it is a bonus but times aren’t the be all and end all,” Cataldo said.

“I have a great relationship with Jason Waddell (former jockey) and I didn’t even have to ask, I could see by the look on his face when he got off that he was impressed.

“It was more Cornflower Blue that was the push for mine. She then vindicated that form with what she did as a three-year-old, winning a Group Three and being Group One placed.

“Ayrton just had so much natural improvement in him physically, he was just big and raw and underdeveloped. With a good spell you could see he might come back five lengths better and if that was going to be the case then he was going to be well above average. Now he looks top class.

“He got a great education with Lauren and Mickey Brennan, who are top-class horse people.”

Cataldo said being johnny on the spot was crucial to securing horses for his clients, as well as having a good rapport with those closest to the horses.

“With the technology now, the trials are online within half an hour after they have been run and there are people from around the world looking at them. Quite often they will ring the trainer or owner direct and you have to contend with that, but it has its pitfalls not being able to look at them and that is where I have an advantage,” Cataldo said.

“You hear talk on different horses and quite often if someone has something they like, they will tell you about it so that automatically alerts me.”

A typical week can vary for the agent, who covers plenty of miles in search of the next good horse.

“I go to all the trials in the north and get to the Central Districts four or five times a year. I will go down for something special I want to look at,” he said.

“I go to most race meetings on Saturdays or midweek as well. It really just depends on what is running.

“In the north there are always good young horses coming through in the maidens and the two-year-old races are of a lot of interest.

While known for buying bloodstock of all ages, Cataldo is at the top of the tree in the tried horse space, having plied his trade for 25 years sourcing horses for jurisdictions the world over.

“It is all about the thrill of buying good horses when they are not exposed. They have one trial and when they go on and win at the highest level, which Ayrton hasn’t done yet obviously, it is a buzz. That is what the game and the job is all about.

“Clients are happy and you get repeat business and that is the best type of business. I am lucky that I have a good client base that I buy for.”

With a variety of clients on his books, the agent is mindful of supplying all of the buyers with the information at the same time and promptly.

“If a good horse becomes available, quite often I am third or fourth in the queue. A horse can cross the line and be sold within five minutes because of how instant the footage is and if you’re not on it until the next day, then you’re no hope,” he said.

Horses bred in New Zealand have won 22.7 percent of Group One races in Australia this season from a supply of 7.2 percent, including a clean-sweep of Derbys – Victoria, ATC, Tasmanian, Western Australian and South Australian.

“Descarado is probably the best horse I have bought for Australia results wise, but Aloisia and Azkadellia were both Group One winners as well, while Gingernuts (pinhooked from yearling to Ready To Run) was a really good horse for me, as is Quick Thinker,” Cataldo said.

“For Australia it’s mainly a middle distance focus. There is not much point sending purely sprinters there as they don’t need them.”

“There are Hong Kong prices and the rest basically. If they’re qualified for Hong Kong it is a different price bracket without a doubt,” he said.

The Cambridge-based scout said veterinary requirements had become more stringent for all jurisdictions, which had added to the challenge of the job, but he takes heart from the soundness of New Zealand stock.

“You get a New Zealand vet in to do the job and then 19 out of 20 times the buyer wants that information sent to their vet, wherever they may be in the world,” he said.

Cataldo is hopeful recent private purchases Hezashocka and Daqiansweet Junior, both staying three-year-olds, can add to his impressive record with prominent syndicator OTI.

Last start Group 2 Championship Stakes (2100m) winner Hezashocka will join the Price-Kent stable to contest the Group 1 Queensland Derby (2400m), while the same race is a target for Daqiansweet Junior who is prepared by Murray Baker and Andrew Forsman.

“They’re both heading towards the Queensland Derby and it is nice to have another one with Mick and Michael.

“I’ve sourced some nice horses for them that are in the stable at present, including Annavisto, Kurabui and I’m Thunderstruck.”

Cataldo is also calling upon the intel of Victorian hoop Ethan Brown, who has been sighted at trackwork in recent days.

“He’s come over to test drive a few for one of the stables,” he said.

The noted judge is also bullish on the new brigade of stallions, with stock just hitting the track in New Zealand.

“With those younger stallions that are out there now, the future looks very bright again,” he said.

“You only have to look at Turn Me Loose, Preferment has some lovely horses, there is good talk on Vadamos, just to name a few, so it is quite encouraging. I am optimistic that our younger stallion brigade are going to do well.”