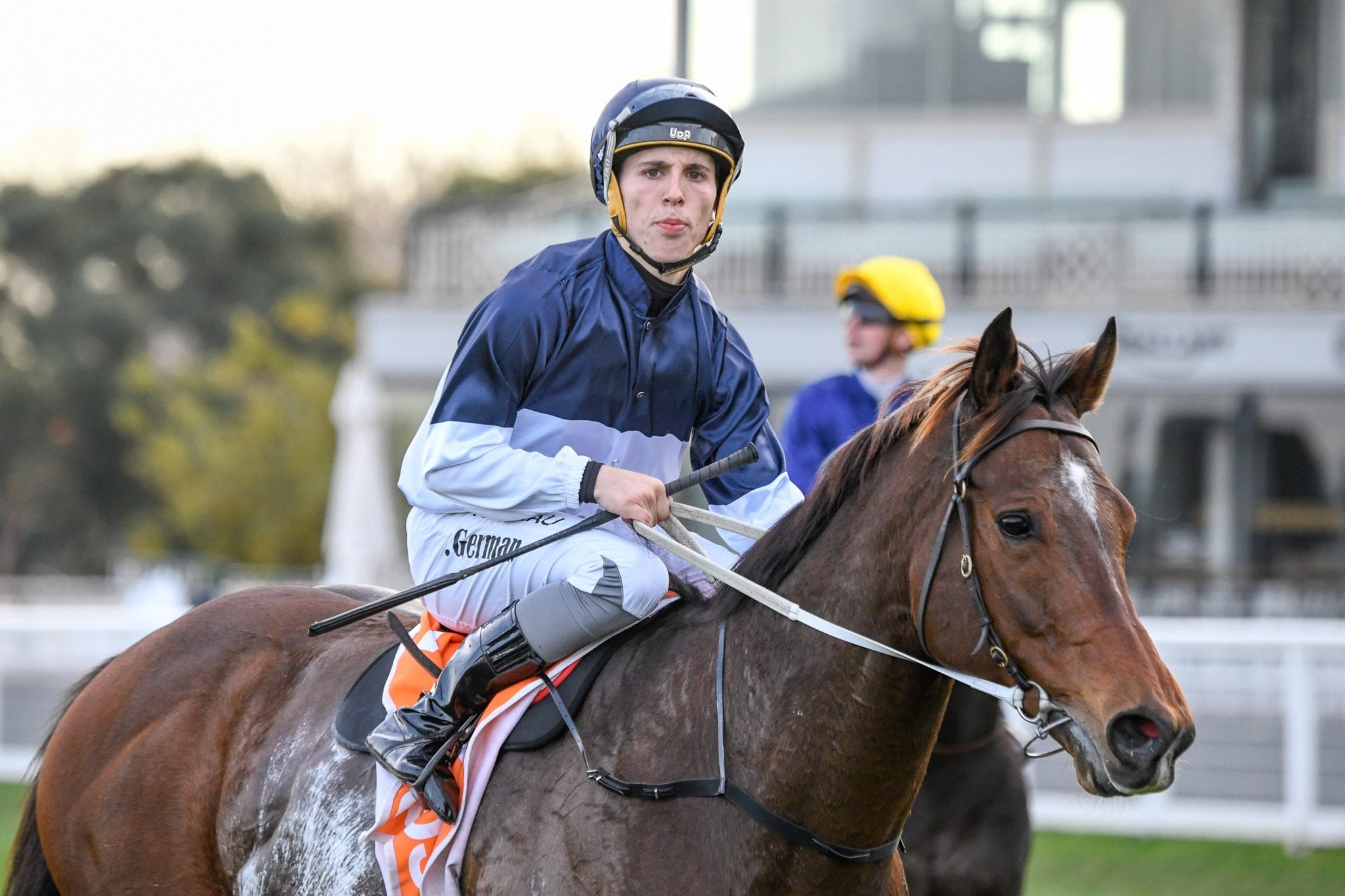 One of the hottest prospects amongst the ultra-competitive Victorian riding ranks continued to put his name in the headlines when he guided the Mick Price and Michael Kent Jnr-trained Heptagon to victory at Caulfield on Saturday.

New Zealand born and raised apprentice rider Lewis German has taken the opportunities that have come his way of late with four winners in metropolitan Melbourne during the month including a double at Caulfield three weeks ago. It’s the sort of success that German has worked hard to achieve since kick-starting his career in racing with a school holiday job at Lance O’Sullivan and Andrew Scott’s Matamata stable just under ten years ago.

“I was born in Gisborne but then we moved to Cambridge where I lived for most of my childhood,” he said. “Mum (Lynda) and Dad (Paul) were both involved in racing and I was involved in pony club and things like that. “I first started working around a few smaller stables and my first real experience was working for Lance O’Sullivan and Andrew Scott.

“We then moved to Auckland which made it a little hard to get down to Matamata so Andrew organised for me to go and see Stephen McKee which was just ten minutes down the road from where we lived at the time. “I used to ride for Stephen in the mornings before school every day, doing gallops and pre-trainers and the like.” It was around this time that German’s father Paul moved to Australia to take up a role with the David and Ben Hayes and Tom Dabernig operation at Euroa with an opportunity for Lewis to join him opening up shortly afterwards.

German made the move and was soon offered an apprenticeship with the stable who were impressed with his ability and work ethic. German had his first raceday ride in September 2017 with his initial winner coming a month later aboard C’mon Honey at Wodonga. Since then German has added a further 112 wins to his tally with 56 of those coming in the 2018/19 season.

Trainer Andrew Scott isn’t surprised the twenty-one year-old is making such a name for himself given the talent he exhibited during his short time in Matamata. “He started off staying with me and my wife during the school holidays,” Scott said. “He used to come out and work at the stable and we got him going riding on the stable pony. “I think he was about 12 or 13 and he used to come down every holiday. He was such a good kid, a little champion and nothing has made us prouder than to see him go on and do what he is doing now.

“When he moved to Auckland, I said to Steve McKee to just grab him as he has a natural seat on him and a good way with a horse. “He’s a very calm young fella who loves horses and they love him. “He’s a good listener who takes things in and you can see that in his riding as he has just gone from strength to strength.”

Able to claim three kilograms when riding in the city, although he is just one win shy of falling to a 2kg claim, German is keenly aware that this is his time to shine as he looks to cement his riding future. With that in mind he has recently moved to work with Cranbourne-based trainer Enver Jusufovic with the intention of broadening his racing contacts before completing his apprenticeship.

“Right now, I’m on loan to Enver Jusufovic who I have been with for a couple of months,” he said. “I have ridden a lot of winners for the Hayes stable but I was a little limited in the opportunities to get rides for other trainers. “It’s very competitive in the city and because I couldn’t ride work for the other trainers it was tough to get outside mounts.

“I want to come out of my apprenticeship with a bigger range of contacts and relationships and the move gives me the chance to do that. “I’m still available to ride for the Hayes team when they need me, but now I’m at Cranbourne I’m enjoying the change. “I can ride trackwork and trials for people like Trent Busuttin and Natalie Young, Robbie Griffiths, Greg Eurell and others while I can also go to Caulfield on a Tuesday and Mornington on a Wednesday so I’m always busy.”

Although based in Australia German hasn’t forgotten his New Zealand roots. “I’m always a kiwi at heart as I love New Zealand and try and come back when I can,” he said. “I’ve managed a few trips back which I have enjoyed but the opportunities are here in Australia and for my future that’s where I need to be.”