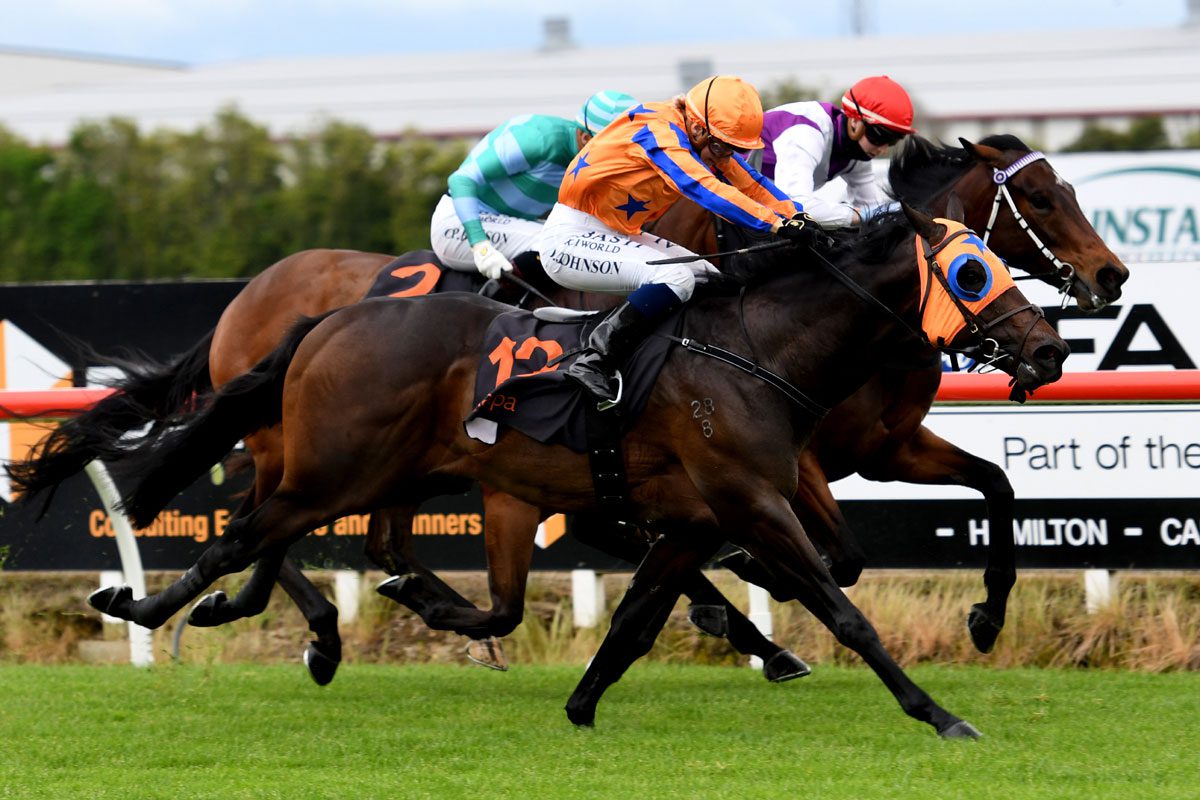 Te Akau trainer Jamie Richards continued his run of success over the long weekend as he produced a winning double at Te Rapa on Monday.

Richards recorded six wins on Saturday, three apiece at Matamata and Riccarton, including stakes victories with Imperatriz in the Group 3 Soliloquy Stakes (1400m), while Noverre stamped his claims for the Group 1 Al Basti Equiworld Dubal New Zealand 2000 Guineas (1600m) next month with a storming late run to capture the Group 3 War Decree Stakes (1600m) at Riccarton.

Richards took three horses to Te Rapa and had early success when Danielle Johnson piloted Savabeel colt Zeitaku to an impressive victory over 1400m in the second race of the day.

Purchased by David Ellis last November for NZD$700,000 at the Karaka Ready to Run Sale, from the draft of Riversley Park, the colt had been building nicely towards a winning run after two good performances, including a fast finishing fourth in strong maiden company at Taupo.

“First time with blinkers on and it was a good strong win,” Richards said.

“I thought he lacked a little bit of concentration at Taupo, and he’s taken a couple of starts to get there, but I feel as though he’s working it out now.

“He’s got a good pedigree, a good sort of horse, on an upward spiral and Danielle (Johnson) gave him a lovely ride. He’s a horse that needs to get into a rhythm, breath, and he can really finish off.

“The 2000 Guineas (Group 1, 1600m) will come around too quickly for him, but he looks like he’ll run a mile out okay, and providing he keeps progressing we could work backwards from the Levin Classic (Group 1, 1600m) in January at Trentham, and find a few nice races for him around Christmas.”

By six-time champion sire Savabeel, Zeitaku is out of a half-sister to multiple Group One winners Sir Slick and Puccini.

The victory was also win number six for the weekend for last season’s champion jockey Johnson, who was successful aboard all three of Richards’ Matamata winners, while she bagged a double at Trentham on Sunday including the Group 3 Thompson Handicap (1600m) on the Roger James and Robert Wellwood-trained Cheaperthandivorce.

Johnson added another victory in race three on the Ken and Bev Kelso-trained Les Crayeres for win number seven and the 1057th in her career to date.

Honours in race four went to the Richards-trained Excitonic and apprentice Niranjan Parmar Singh who claimed his first raceday success at his 25th attempt.

Parmar had his first ride for Te Akau back in May and Richards was delighted by the both the effort of horse and rider on Monday.

“Horses like him, that have had a heart issue in the past, tend to race well fresh and he’s also lacked physical maturity,” he said.

“He’s needed time to strengthen and grow into himself and the owners have been patient.

“I thought he raced really well and Parmar rode the horse particularly well. He followed instructions to go back, get cover and relax, and at the 600m he seized an opportunity to start moving into the race.

“He was quite impressive when he let down, put a space on them quickly, before pricking his ears near the winning post.

“It’s great for Parmar to get his first race day win. He’s been with us for a little while and like nearly all apprentices it takes some time for the penny to drop.

“We adopt a patient approach and try finding the most suitable rides, while also making use of his weight claim.

“He’s learning to let it happen, rather than trying to force things, and he’s a valuable asset in terms of his track work riding and trials and helping to educate our young horses.

“He’s doing everything really well, he’s a dedicated young man and I’m thrilled to give him his first winner.”

Excitonic is another successful purchase by Ellis who outlaid NZD$230,000 at the Book 1 session of 2018 Karaka Sale to secure him from the draft of Brighthill Farm.