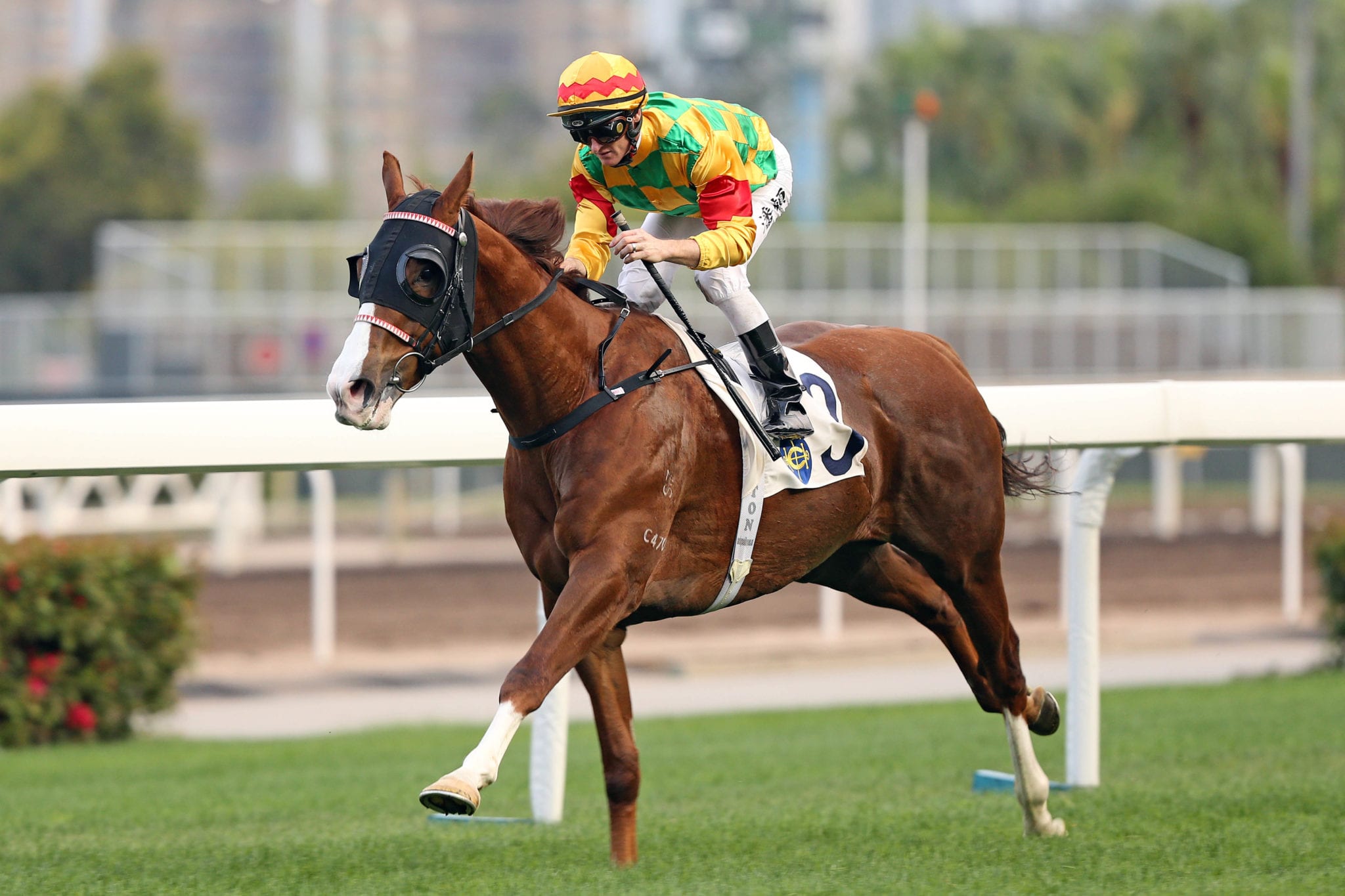 Champion jockey Zac Purton sealed a four-timer at Sha Tin on Saturday, 14 March and in doing so closed the gap on premiership leader Joao Moreira to four wins.

“It’s just a matter of turning up every meeting, trying to ride winners and if we can make a race of it, we will,” Purton said.

He capped his afternoon’s tally with a comfortable win on the smart four-year-old Mighty Giant in the Class 3 Sheung Hei Handicap (1400m). The Ricky Yiu-trained chestnut took his record to three wins from six runs.

“He’s not a sit and sprint horse, he’s very big and he’s got a lovely long action, so I just got him into a rhythm and kept him happy. Last time I rode him, they went really fast and he kept galloping, so it’s not about trying to outsprint them, it’s about having him happy,” Purton said.

“He’s still quite raw, he’s very big and he’s still working out where to put his legs but he’s honest – he’s going to be unassuming, I think, he’s going to improve as time goes on.”

The Australian had made it three wins with a punching drive on the Tony Cruz-trained four-year-old Transcendent, in the same black and grey colours as champion stayer Exultant.

The French import was a Listed winner pre-arrival, when known as Pizzicato, and made a belated Hong Kong debut, having been withdrawn from an intended outing back in December.

“He had some complications, he had a little accident on the float to Happy Valley; everything was going great after he recovered from that and then he had a foot problem and that was two months we’d lost,” Cruz said.

“He’s only a miler – he wouldn’t have run the Derby distance – but you can see his form in France, he’s a very consistent, honest horse. He had to win today and Zac rode a perfect race.”

Purton posted back-to-back wins early on the card, thanks to a pair of three-year-old prospects: in the afternoon’s second contest, the Class 4 Shung Ling Handicap (1200m), the David Hall-trained Beluga scored at his second start; one race later, Purton guided the Dennis Yip-trained Good View Clarico to a straight dash win in the Class 4 Fung Mo Handicap (1000m).

The John Size-trained Juneau Park (130lb) got the best of a frantic duel to win the Class 4 Sze Mei Handicap (1400m) and ensured Moreira took something from the day. The 1.5 favourite was second-best everywhere except where it mattered; the Brazilian ace elicited a last-gasp lunge, drove the four-year-old’s long nose down, and when the camera flashed the verdict was his over the Shinn-ridden Ka Ying Excellent (127lb).

Shinn had two close seconds to show for his efforts, taking his season’s tally of runner-up finishes to 35, against a solid nine wins.

Apprentice Victor Wong made it three wins in as many meetings when he took the opener, the Class 5 Ng Fong Handicap (1200m), aboard the Peter Ho-trained Multimax.