Purton returns from injury to post 50th for the season 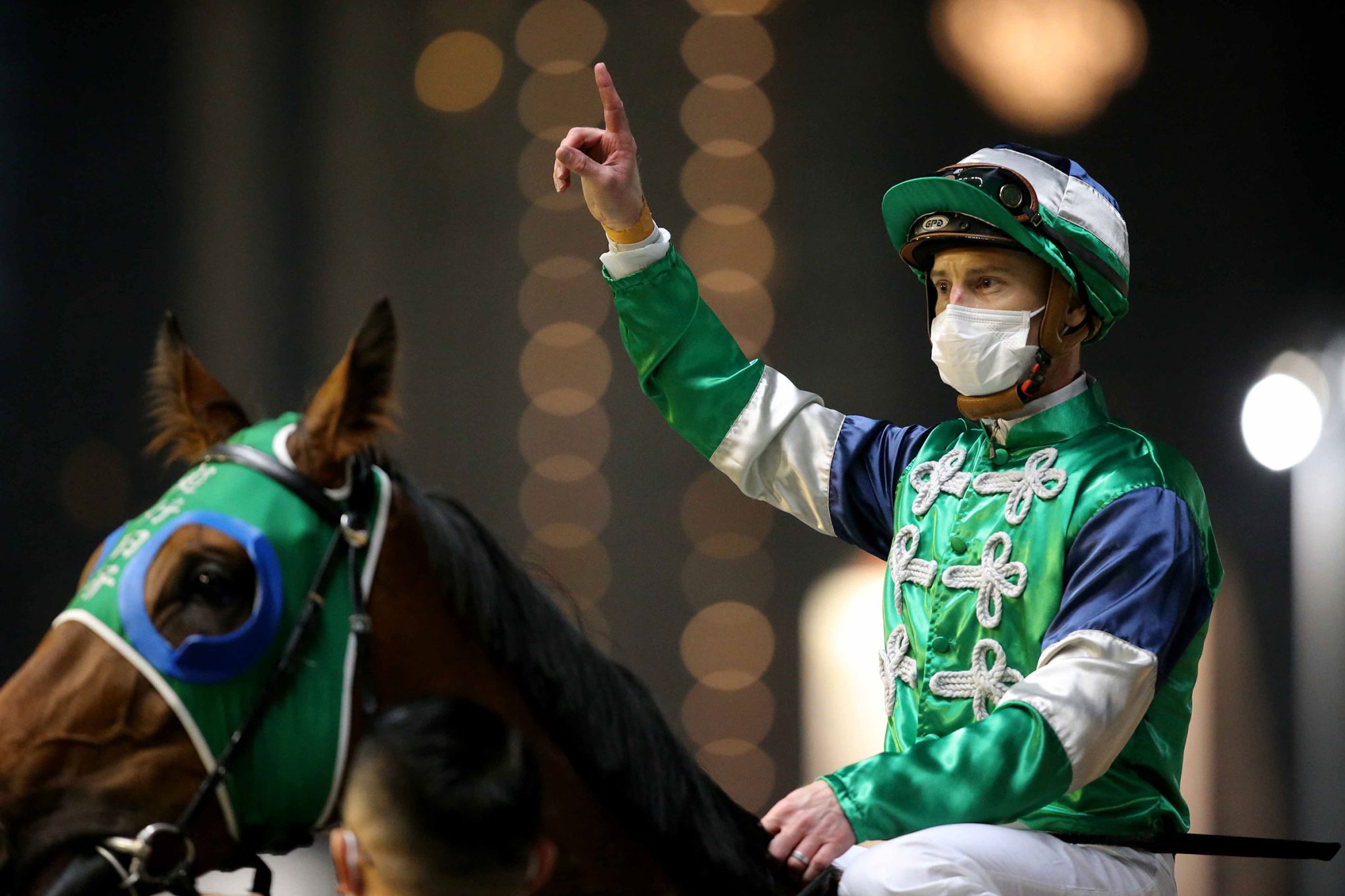 Exactly a month after suffering multiple injuries in a Sha Tin fall, Zac Purton notched his 50th victory of the 2021/22 season as the champion hoop revived hopes of a fifth jockeys’ crown with a successful return at Happy Valley on Wednesday night (12 January).

Competing for the first time since 12 December, Purton had to wait until the last of his seven rides – on the final event on the card – before Francis Lui’s Cheerful Days gave the four-time Hong Kong champion his half-century milestone with victory in the Class 3 Lok Fu Handicap (1650m).

Sidelined for eight meetings with fractures in his right wrist, ribs and feet, Purton watched his 11-win lead over arch-rival Joao Moreira morph into a nine-win deficit but he clawed one victory back at the city circuit to trail the Brazilian 58-50.

Asked to address his milestone on Wednesday, Purton observed it had materialised “probably a month slower than I would have liked, but we got there and hopefully there’s another 50-plus to come.”

Bentley extended a flourishing connection with Lor when Smart Idea snared the first section of the Class 4 Ma Tau Wai Handicap (1200m). Having his 21st ride for the season for Lor, Bentley posted his fifth win for the championship-leading trainer.

“I’m really delighted, obviously Frankie has given me a lot of support and him being the leading trainer, I couldn’t be in with a better trainer. I’m thankful to him,” said Bentley, who now has 11 wins for the season.

“As far as I’m concerned, I just want to seize every opportunity I’m getting and, at the moment, I feel like I’m doing that. My confidence is high and very pleased with the way things are going.”

Smart Idea improved his record to two victories and six minor placings from 11 starts and provided Bentley with his fifth win from the past five meetings.

“He’s (Borges) been good, as the figures show. If the horse has got a chance in the race, he gives it a chance and sometimes they win,” Size said. “I’m happy to give him a ride and he can ride light. In this particular environment, he’s a suitable match for me.”

Ricky Yiu continued to build impressive momentum with Off The Reel and King’s Trooper providing 2019/20’s champion trainer with important traction approaching the halfway point of the season.

“I’m very happy with the stable strength. Coming to the middle of the season, a lot of the horses are picking up gradually. Most of them are in good form,” Yiu said, turning his attention to Off The Reel, winner of the Class 4 To Kwa Wan Handicap (1650m) for Derek Leung.

“He’s very lightly-raced, he’s a four-year-old by Dundeel and he’s improving out of sight. This is the first horse by Dundeel I have ever trained and I’m not really impressed by him. He is a very difficult horse to train, he pulls like a train in the morning.”

“I’m happy with my day, one second place and one winner now. It’s very good, I’m in good form,” Hamelin said posting his seventh win for the campaign. “The last performance of the horse wasn’t that bad and I was happy to ride him.

“It was a good draw (barrier five) and the horse is healthy and he never gave up.”

“I’m a bit surprised and he still seems green,” Lui said. “If you look at how he ran tonight, he’s still got room to improve.”

Benno Yung credited Derek Leung’s initiative after sizing up Prance Dragon’s options soon after the start before the gelding flashed to victory in the second section of the Class 4 Ma Tau Wai Handicap (1200m).

“The key was at the start. Derek was able to move in onto the rails before the turn and we had the chance to be closer in the run,” Yung said. “The horse has got ability but he has got his health issues.”

A premeditated decision to make a mid-race move paid off for Chris So when Karis Teetan sprinted on Legion Of Merit at the 1000m mark to take the lead before clinching the Class 4 Tsz Wan Shan Handicap (2200m).

Having his 14th Hong Kong start, the grey prevailed by a head under his light weight of 114lb.

“I spoke to Chris this morning and he said ‘He’s got no weight and if they’re going slow, take off’ and this horse just stays on, but in the last 100 metres, he was stopping,” Teetan said.

“The line came just in time. When they win like that, you make the right decision but with a big horse like that you’re best to get going early.”