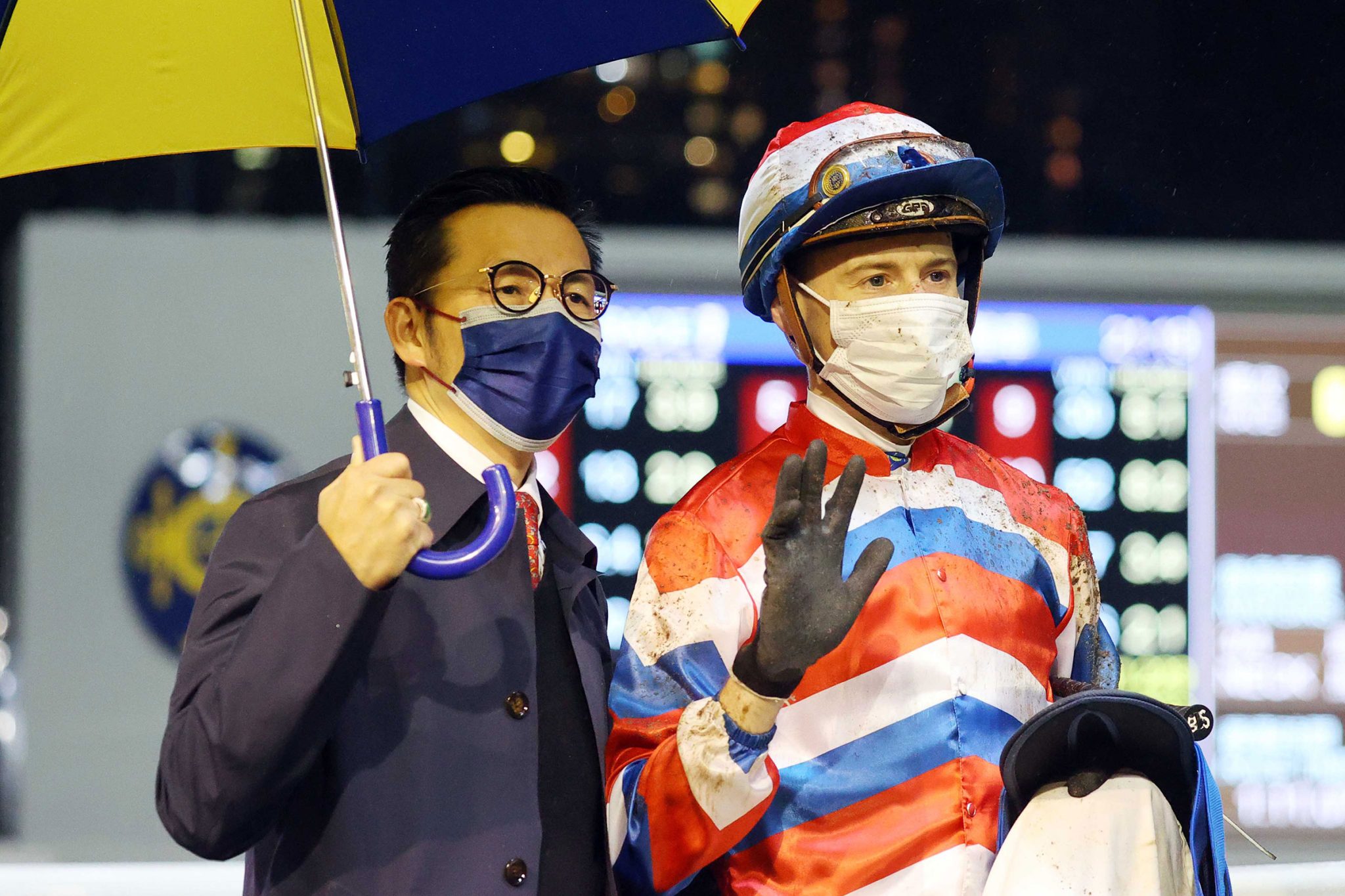 Frankie Lor breathed fresh life into aspirations of a first Hong Kong trainers’ championship with a treble as Joao Moreira cut into Zac Purton’s buffer in the jockeys’ title with a double on a night of milestones at a drenched Happy Valley on Wednesday (23 March).

Runner-up to John Size in his first season in 2017/18, Lor eroded his former mentor’s lead with the victories of Jade Phoenix, Triple Triple and Smart Idea as Moreira (90 wins), Size (60) and Karis Teetan (50) all reached significant benchmarks.

“It’s great to train winners but I want to win for the owners, not because of the championship,” Lor said after combining with Harry Bentley and Smart Idea to win the second section of the Class 3 Sheung Hei Handicap (1200m).

“I’m pleased for the owners more than anything when the horses win. The stable is going well.”

Size celebrated a double with Savvy Delight and Wild West Wing to retain hopes of a record-breaking 12th title.

“It was a good effort, he travelled a bit strong through the first half of the race and then when we came down near The Rock (750m), he wobbled a bit and might have lost his confidence in the track and lost his rhythm, so I had to click him up a little bit but he grabbed the bit and wanted to get going,” Purton said.

“He wobbled off the track a bit around the turn and then he wanted to hang in under pressure – he did a lot wrong tonight, but he’s gone up a lot in the ratings very quickly which for a young horse is not easy. I don’t think he was at home on the track either, so it was a good effort.”

Man indicated the three-year-old would probably have a short break before turning his attention to Sha Tin in a bid to add to his trio of Happy Valley wins.

“The jockey reported he wasn’t comfortable in the conditions, so it was a good win,” Man said. “I might try him at Sha Tin next to see how he handles it there.”

Size posted his 60th victory of the season when Savvy Delight ploughed through the conditions under Moreira to clinch the Class 4 Sze Mei Handicap (1000m) en route to temporarily extending his lead over Lor to seven.

Vagner Borges logged his 18th win of the season – and 13th in tandem with Size – when Wild West Wing charged home to triumph in the second section of the Class 4 Tai Yau Handicap (1200m), leaving Size with 1,391 career victories in Hong Kong – a tally bettered only by John Moore’s record 1,735.

“The conditions weren’t too bad out there,” a mud-spattered Borges said. “It’s just normal for when it’s wet. It’s good to get another winner for Mr Size – he’s given me a lot of support.”

Moreira slotted his 90th victory of the campaign after driving David Hall’s Lucky Missile into the lead turning out of the straight before snaring the second section of the Class 4 Tseuk Luk Handicap (1650m).

Prevailing in his own right after a last-start dead-heat, Lucky Missile has proved remarkably consistent this term with a string of minor placings bolstering two wins.

Lor’s experiment with gear changes triggered Jade Phoenix’s return to the winner’s circle after the Per Incanto gelding led virtually all of the way to land the first section of the Class 4 Tseuk Luk Handicap (1650m) under Karis Teetan.

“I took the blinkers off and put the cheekers on and it seemed to help,” Lor said, while Teetan celebrated his 50th victory of the season, four days after securing the BMW Hong Kong Derby (2000m) atop Romantic Warrior. Jade Phoenix had not won since May, 2021.

Lor raised his brace using a proven recipe with Triple Triple who, just as he had last season over the same course and distance, jumped from barrier one and sat close to the speed before lifting the first section of the Class 4 Tai Yau Handicap (1200m).

Teetan closed the night in commanding fashion when the talented Packing Award charged down the outside to land the Class 3 Sam Chuk Handicap (1650m) for Peter Ho. A son of Shamus Award, Packing Award now boasts three wins from only eight starts – and seems destined for success in higher grade.

“I thought it was going to be hard to make ground in the straight from the back,” Ho said. “He did well.”